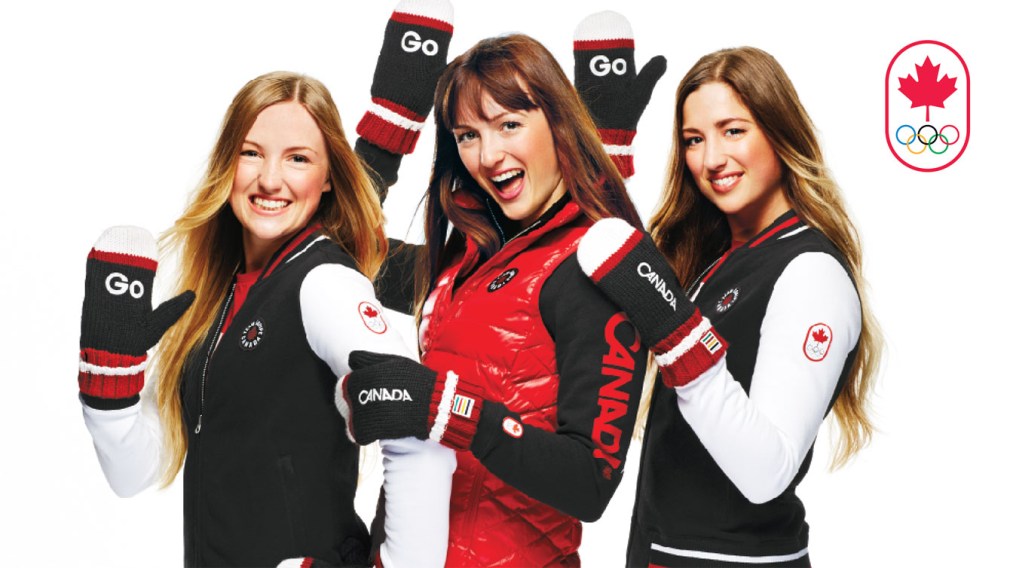 Hudson’s Bay launched the sixth edition of #RedMittens on Thursday with help of its new Olympic ambassadors, the Dufour-Lapointe sisters – Maxime, Chloé and Justine.

For hard working Canadian athletes, the mittens are a direct source of funding and for proud Team Canada fans, they provide fashionably warm hands during cold winter months. In an off-Olympic year the Hudson’s Bay 2015 Red Mittens are especially crucial. Canadian Olympic hopefuls are presently preparing for the Summer Games at Rio 2016. Getting to Brazil will require resources such as coaching, use of training facilities and medical support. Direct funding from sales of the mittens will help meet these needs.

Since its first edition introduced for Vancouver 2010, the mittens have helped Hudson’s Bay raise more that $26 million thanks to fans choosing it as a symbol of support for Team Canada.

Black is the new red The world-renowned logos that cement the partnership are once again on the outside cuff of the mittens, the Canadian Olympic Team is on the right hand and Hudson’s Bay is on the left.

For the second straight year the mittens are available in an infant size and $3.33 from each pair of #RedMittens sold go to the Canadian Olympic Foundation.

Justine Dufour-Lapointe stood at the top of an Olympic podium in Sochi, Russia and knows that for continued success for all Canadian athletes Hudson’s Bay provides a tremendous opportunity. “It is an honour for my sisters and I to be included in a campaign that gives so generously back to Canadian athletes,” the Olympic moguls champion said.“We encourage all of our fellow Canadians to get behind this cause and buy a pair of the sixth edition Red Mittens to help Canadian athletes with the funding they need as we head toward Rio.”

Prior to the sisters another freestyle ski legend, double-Olympic moguls champion Alex Bilodeau, was the face of the iconic mittens. Bilodeau retired at the conclusion of the 2014 freestyle season, but Justine and athletes of the next generation are only getting started.

“With this support, we will be able to compete at our best.”