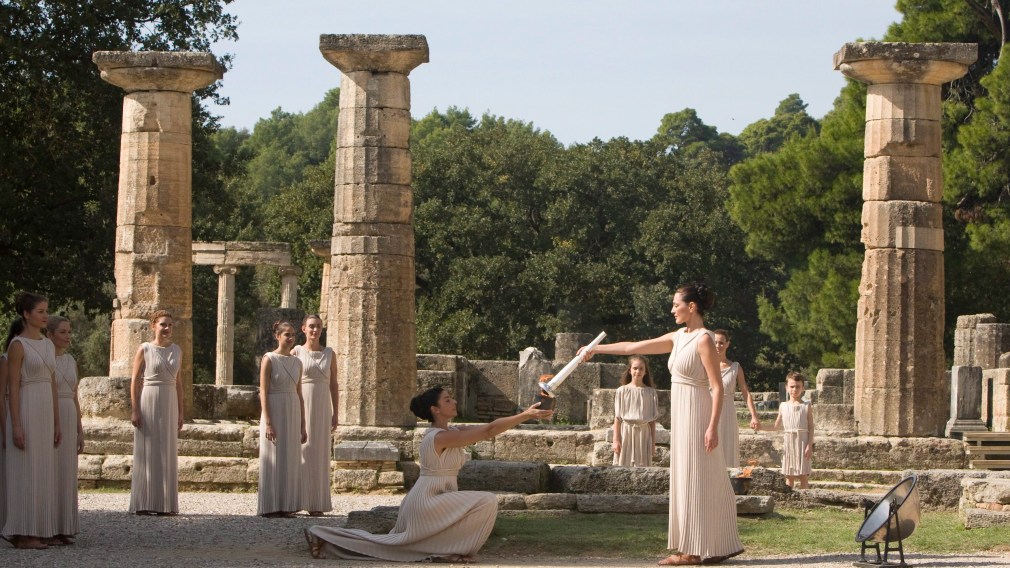 The Ancient Greek world was divided into many different city states, each ruled by their own governments.  Much like today, just because people have similar religious beliefs, languages and culture, it didn’t mean that they always get along.  In fact wars often broke out between these cities, as Greek fought Greek in bloody battles.

Yet even during the most vicious of these wars, a solemn Olympic truce would end the fighting and summon the people every four years to Olympia, home of Zeus. It was not just a time of peace, but also a time of intense competition, where athletes would contest for the coveted olive wreath.

The ancient Olympic Games were part of a religious festival to worship Zeus, the father of the Greek gods and goddesses.  Greeks thronged to Olympia to feast, to celebrate, and to watch the strongest athletes compete to bring honour to their cities and families.

Although no one knows when the Olympic Games began, the first written records date back to 776 BCE.  Back then, there was only one event—the stadion race.  It was a full out sprint around the 600 foot (190 metres) stadion track.  Early records show that the victor was Koroibos, a cook from a nearby city. The stadion races were the most prestigious of the ancient Olympic Games and the winner of the stadion race was considered the champion of the entire Olympic Games.  As time went on, more running distances were added and the practice of competing naked took hold.

Only men and boys were allowed to compete and only unmarried women were allowed to attend.  The women had their own athletic festival, the Heraia that was held in honour of Zeus’ wife Hera.  Unmarried girls competed in running races to win the sacred olive branches.

Other events were added over the years to the Olympic Games.  Pankration wrestling was one of the big crowd-pleasers.  This sport was a no-holds-barred type of fighting with kicking, punching and wrestling.  Only biting and eye gouging were banned.  There was no need for time limits as the fight continued until one competitor begged for mercy, was rendered unconscious, or was killed.

The pentathlon was a 5 event competition that included discus, javelin, jumping, running and wrestling.  Historians are not clear as to how the overall winner was declared, but some believe the two leaders after the five events wrestled each other to determine the winner.

Chariot racing also became a popular event.  As many as 60 chariots raced around a hippodrome at a time.  The four-horse (tehrippon) involved twelve laps down long straight-aways and around tight corners.  These races could be deadly, as the riders resorted to the most violent of means to defeat their opponents at all cost.