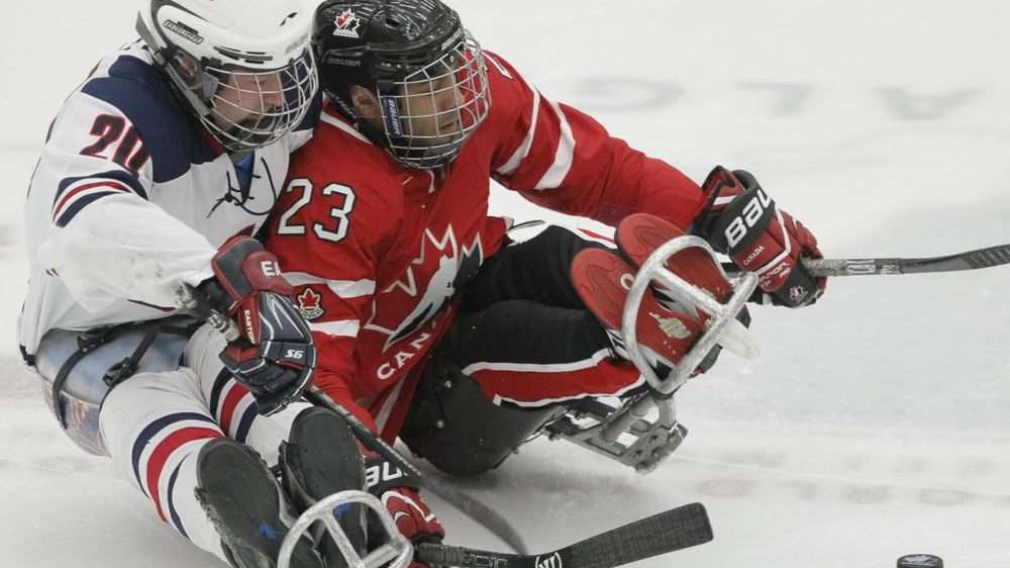 Generally, when people see someone in a wheelchair, they often start to treat their body and disability like it is a subject open for public discourse. After an interview with Paralympian Kieran Block, I googled “disabled” and was taken aback by the words above.

“It isn’t being disabled that is the hard part, its people seeing the disability first.” Everyone will face adversity at some point in their lives and it’s not whether we meet adversity, but rather how we will approach it.

That is the story of Kieran Block.

Life is about opportunities, both creating them and embracing them. For some athletes their dreams whether it be to make the Olympics, the National Hockey League (NHL), the National Basketball Association (NBA), or any other elite sporting league – is what defines them. That is their bliss.

Block, who was born and raised in Edmonton, Alberta grew up realizing that bliss at a young age. His ultimate goal was to play in the NHL.

“I lived and breathed hockey. Everything I did was hockey. I was fortunate to play in the Western Hockey League (WHL) and from there decided to go to the University of Alberta to play for the Golden Bears,” explained Block. “After my first year, however, I had my cliff jumping accident. That’s where everything changed, and I had to revaluate my life and look at things differently.”

He would require five surgeries over the next 10 years with each surgery bringing on different challenges. One challenge for certain was that if Block couldn’t play his sport – if he couldn’t play hockey – then who was he?

“Growing up a hockey player, it felt like you would be a failure if you didn’t make it to the big leagues (NHL). My views about that started to change when I was around 20 years old.”

Block got depressed and went down a dark path. He wanted his old life and his body back. He lost everything that he valued and worked towards.

It was during that time where he was also exposed to the game of sledge hockey, by his good friend Matt Cook, who was a member of the Canadian National team.

“I’ve come to learn that view and idea was solely coming from inside myself and sledge hockey opened my mind to think that people are people. I made changes to my support circles, friends, and a lot of my attitudes and beliefs started to shift because I didn’t want to make anyone feel like they don’t have value or they’re not worthwhile. It’s a lot easier to be accepting when you can accept yourself.”

“Having someone to look up to like Matt was a blessing because he was always smiling. He never complained, not once.” Block wondered how he had ever found that level of acceptance.

Finally, he realized that it wasn’t just his life, it was life itself. It wasn’t just his pain, it was everyone’s pain. He had a choice, to either keep fighting this or let go and accept it, not only of his body but also of his circumstances.

As he walked into the dressing room for the first time there was this feeling of depth, richness, authenticity, and connection that he had never experienced before. Block would never be the same.

Although everyone had their own disability, each athlete came into it in their own way be it by a car accident, tumours, from birth, or cancer. Sledge hockey inspired change to Block’s values and ideologies from the world he once lived in of dis-inclusion in hockey.

“It was okay to be different in sledge hockey. Other people were looked at as different assets on the ice,” explained Block. “I remember thinking to myself, ‘It’s not the world, it’s me’.”

Not long after his introduction to sledge he had one of his best friends come out to him in university. As he recalls himself struggling with his own identity, here she was going through the same thing but on a different level.

“That was the first person who has ever come out to me. How upset she was and how hard it was for her to say it, I wouldn’t want anyone to have to deal with that,” explained Block. That’s when I started to be aware of my language. If she was that close to me and it was hard for her, what about that person in the dressing room that likes guys or girls of the same sex and is terrified because of the hockey language that is used.

“When I was reading Brock McGillis’ interviews and I heard him talk about hockey and the dressing room, I thought to myself: ‘Yup, you’re not too far off from my experience’. I could see myself in the room with him. The language being used in the room wasn’t always ideal. I never really felt like I fit in and I wasn’t quite the same as others.”

“No matter your disability, race, gender identity, gender expression, everyone has value. I know how hard it was for me when I broke my legs thinking my life was over and to think that you won’t provide the same value. However, based on my experience it comes from within and there is a lot of support out there,” noted Block.

For Block, there was always something burned inside him which far outweighed the injuries. Smaller goals kept him going along the way and although Block’s body may have been limited, it was his spirit that was unstoppable.

“As I learned back in 2007, life can be gone just like that. It’s finding those wins in everything that you do and getting the opportunity to share so many wonderful moments. If you look for dirt, you’ll find it,” said Block. “From going to my first World Championship and them saying I wasn’t disabled enough for sledge hockey but I’m too disabled for traditional hockey, to getting cut from the Olympic team in 2014 and the next day getting a teaching job. Or when I drove a car again, slept through the whole night, went back to school, stepped back on the ice again nine months after my accident, playing shinny with my dad, when I made the sledge hockey team, winning a National Championship, my first day as a teacher, playing Senior AAA stand up hockey, coaching and having four sledge players make the National team this past year – these were all just as valuable as taking my first steps.”

The accident is just a footnote in Block’s story. It’s an accomplishment he has overcome as opposed to the ‘worst thing in his life’. Focusing on the positives and the opportunity of life has allowed him to express and share his story with his most recent notable accomplishment of launching his new book entitled The Ups and Downs of Almost Dying.

“It begins in 2007 right from the accident just past the 2014 Paralympics and we leave it open to see what’s next. It’s not a story book ending winning gold. Looking at a lot of metaphors; one being me teaching physics, gravitational force. Years later I’m writing the equation on the board for my students in real life,” laughed Block. “The writing process was so therapeutic and the ups and downs of my story are so emotional for me. I tried to incorporate my battles, successes, and how I started to change my opinions and beliefs – that’s what I try to leave with the reader. Also, I wanted to leave something behind to my audience, more than motivationally speaking, I would love to just continue the story. Looking at the positives is how you are going to come out on top and find that happiness piece. That is what I was struggling with so much. If I don’t do that then maybe I don’t meet the nurse that becomes my wife.”

If Block could have a billboard with one quote on it, it would be by Marian Williamson – about believing in yourself – “As we let our own light shine, we unconsciously give other people the permission to do the same.”

“For me, when I was in a dark place, it was Matt who was living his life essentially dying from cancer, but still smiling every day, looking for those positives, wins, and successes. He was happy. At the time I wasn’t. I was miserable. As he let his light shine, he showed me that I could let mine shine. When that happens you never know who you may inspire through that process.”

His true strength never came from his body. Although his physical capabilities changed, he has lived his life through creative expression of who he really is. It wasn’t about whether he met adversity, but how he has let his light shine during that process.

For so many #OneTeam ambassadors and all around the world people are going through their own difficult experiences be it by a cliff jumping accident, or coming out as gay, and so much more. If we share and talk about our stories with inclusion, we can inspire each other to get through those challenging times.