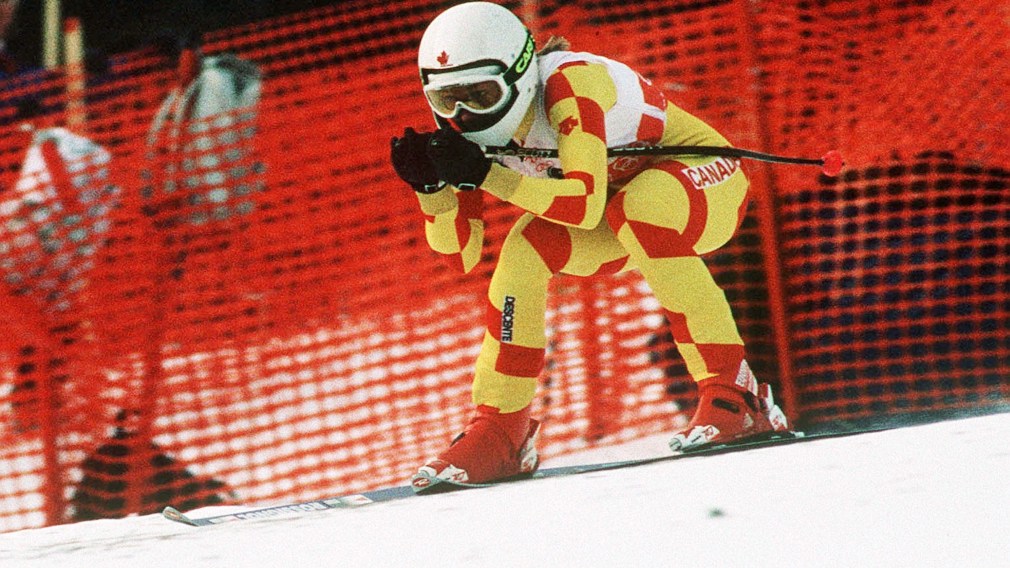 By The Canadian Olympic Committee
January 20, 2010

She is a Double Alpine Medallist in Calgary 1988

This special series catches up with some of Canada’s most notable Olympic athletes, forever members of the country’s ever-growing Olympic family. One question remains: Where are they now?

On Nakiska Mountain, near Calgary, Karen Percy won Canada’s first-ever Olympic Winter medal in Canada. In fact she won two: the alpine ski racer collected two bronze medals in downhill and super-G, while missing a third bronze in the combined event by fractions of a second. There at the 1988 Olympic Winter Games, Percy accounted for 20% of Canada’s five medals – and the only ones outside of figure skating.

She is now Karen Percy Lowe, and as most Edmonton residents know, is married to Oilers president of hockey operations, Kevin Lowe. They have three daughters and one son ranging in age from 11 to 18. Percy Lowe was married soon after the 1988 Games, and as her eldest child’s age would suggest, was a mother also soon after.

She decided not to compromise her new family with the travel and obligations of ski racing. “I devoted myself to them, which I’m happy to have done,” she told Olympic.ca.

Percy Lowe is deeply involved in her community and in volunteer work. She spent a decade with Ronald McDonald Children’s Charities. Now, she and Lowe work with an overflowing handful of charities, including the Zebra Foundation, the Oilers Community Foundation and Compassion House, the latter a home for those with breast cancer who need support and a place to stay while they get treatment in Edmonton.

Lately, Percy Lowe is kept busy as part of the Waterkeeper Alliance, a global organization dedicated to clean water. A board member for the past three years, she is in the midst of creating an Edmonton chapter devoted to protecting the Saskatchewan River.

The double Olympic medallist keeps in touch with her teammates from two decades past. “Whenever we see each other, it’s like we were together yesterday,” she said.

People, even now, considered Percy Lowe an underdog back in 1988. As the media ramp up coverage toward 2010, this has been said a few times of the Banff, Alberta native. Suffice to say, with anything possible on the slopes of a mountain, she knew she was no underdog.

“I had been on the podium and I knew could be on the podium there,” she said. “I wasn’t going to the Olympics to not try and win a medal. When I did, it was magical, a dream come true. I wasn’t expected to win a medal, but in my mind I expected to.”

She said that Canadian skiers racing toward 2010 need to be ready for a different show. “It’s not like skiing a World Cup in St. Moritz or Solden,” Percy Lowe said, adding that the pressure and distractions at an Olympic Games at home are huge.

She remembers riding the chairlift for her first Olympic run on Nakiska, hearing her friends and family yelling to her, wishing her good luck. They were excited; they had never seen her race before. “I thought, oh my gosh, I really have to focus here otherwise this won’t work.” From then on, she extracted herself from friends and family, telling them she’ll see them when her races are done.

Percy Lowe remembers the Olympic spirit of Calgary being huge, a sport spirit that still exists today. “You walk into Calgary and you feel it,” she said. “You can see why the Games were here. It’s an Olympic city.”

She thinks Vancouver can do the same, come out of the Games with something forever in their stature – to be the town of the greatest Olympic Winter Games ever.

“And I’m sure (Canada) will get more medals than we did,” she added.

Where Are They Now: Karen Percy Lowe
Ana Padurariu: Facing the never-ending challenges of 2020
What is the difference between racquetball and squash?
Shuttlecock and balls: The fastest moving objects in sport
Team Canada Athletes Out of Isolation, Back to Training
Getting vertical: The highest jumps in sport