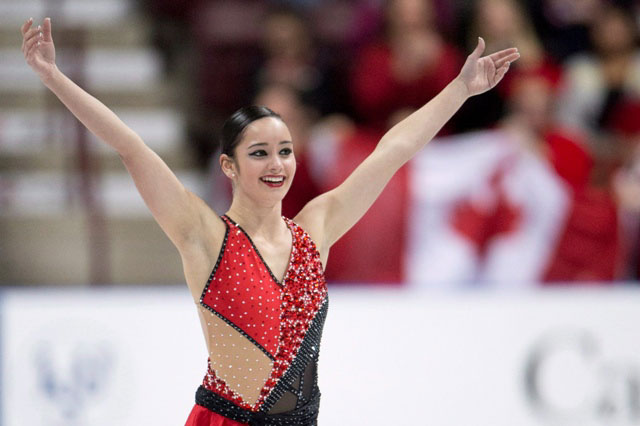 Few people earn the national spotlight at age 16 the way Kaetlyn Osmond did in October of last year when she won the 2012 Skate Canada International in Windsor, ON, the first ISU Grand Prix victory of her career.

The soft-spoken Marystown, NL native tallied personal best scores of 60.56 in the short program and 115.89 in the long program to top the field with an overall mark of 176.45.

Along the way she finished ahead of an Olympian and World Championship bronze medallist in Akiko Suzuki and a top-10 ranked figure skater in Kanako Murakami, both of Japan, to the delight and surprise a proud Canadian crowd in the WFCU Centre.

“I was ecstatic,” said Osmond after the win.

It was a coming out party for Osmond who first gave notice to die-hard fans in Canada when she finished third at the 2012 Canadian Championships behind Amélie Lacoste and the now retired Cynthia Phaneuf.

A year of growth To say that Osmond has completely turned her career around in the last few months would be an understatement.

Part of the awe surrounding her transformation is how quickly she became a contender in her sport. A junior before this season, Osmond had never finished better than ninth place at a Junior Grand Prix event or even won a national title in her age group.

Much of this breakthrough is attributed to a new dedication to her sport, both on and off the ice. This is something highly noticed by many in her camp, including coach Ravi Walia, a one-time national figure skater himself.

“In the last year she’s dedicated more of her time to skating,” said Walia, who has coached Osmond since she was 10. “She’s been doing Pilates, has a dietician and does a lot off-ice training. All things she’s done before, but a little more attention has been put into it and it has showed in her results. It’s really important to have that to reach the next level.”

Some of those off-ice training regiments start as early as 5 a.m. and along with Pilates, the team incorporates a lot of gymnastics and ballet to round out her training.

Walia says he had always seen the potential in Osmond to become an upper tier competitor on the Figure Skating circuit.

“You know at 10 she was a lot like she was now,” said Walia. “She loved to compete, worked really hard and loved skating. With those ingredients you’re automatically going to have a lot of potential for the future. You can feel the maturing in her skating. That’s really important to get to the top level in skating and to get to the top-10 in the world. She’s been working really hard to achieve that.” Osmond’s recent streak of scores has impressed many including the likes of 2010 Olympic bronze medallist Joannie Rochette. THE CANADIAN PRESS/Rob Skinner

Since the retirement of Joannie Rochette, Canadian fans have been left clamoring for a new young contender to come up from the pack. Osmond may be proving she is the next chosen one and has impressed the 2010 Olympic bronze medallist.

“I saw Kaetlyn Osmond win at Skate Canada,” said Rochette. “I didn’t really know her before because when I was competing she was still a Junior or a Novice. She’s very young. She did so well at Skate Canada and I was so impressed by her. I think she has a bright future. For so many years, people were questioning the talent of the ladies in Canada. Well, we have one that could have a lot of potential. I can’t wait to see how she does.”

In the short term, Step 1 for Osmond and her team in fulfilling her potential will be competing against the rest of the nation at the Canadian Figure Skating Championships in Mississaugua, ON. Jan. 18-20.

A national title will be on the line against stiff competition from defending champion Lacoste, but so will an opportunity to be a part of Canada’s world team selection and compete on home soil in March when the World Championships are held in London, ON.

Along with a good showing at the world championships comes a spot on the Olympic team and a chance to represent Canada at the Sochi 2014 Winter Games — on the world’s biggest stage. This idea is not lost to Osmond.

“I’m 17 so it’s hard to imagine that I can make it to the Olympics in over a year,” said Osmond who celebrated a birthday in December. “But definitely, with how I’ve been skating lately, it is in my sight. It would be awesome. I need to train a lot harder and keep performing consistently. I need to keep focus all year round and stay on top of everything we are doing.”

Osmond has placed a lot of trust in Walia during the last seven years, explaining he has found the right balance between training and having fun as well as how hard Osmond should train.

They’ve set out personal goals together to improve at every competition and are clearly accomplishing this so far during the 2012-13 season improving her overall score from 170.19 at the Nebelhorn Trophy to 176.45 at the Skate Canada Grand Prix — a massive improvement from her 155.47 score at the 2012 Canadian Championships.

“The fall was exciting, but nothing has really changed in my expectations for Kaetlyn,” said Walia. “The goal will still be that we improve at every competition and make the world team. There’s a lot of planning and improvement that need to be made in order to get to that level.

“I know she wants to be on top of the world. She needs to keep doing what she’s doing and she’ll have a great future. “