On July 4, 2011 the International Olympic Committee Executive Board approved the addition of Snowboard Slopestyle to the Olympic program starting in 2014 — Sochi, Russia. With that came new hope for several snowboarders who had never expected the chance to be a part of a Canadian Olympic Team.

Enter Mark McMorris of Regina, SK who has been waiting for this opportunity his whole life after tearing up the slopestyle world since his mid-teens. Now at 19 and having already been competing on the World Cup tour for three years, McMorris is determined to do what it takes to enter Fisht Olympic Stadium with his compatriots.

As millions of Canadians did in 2010, McMorris closely watched the Vancouver Winter Games and was inspired by the competitors, but none more than his friend Stale Sandbech of Norway.

“In Vancouver one of my really good friends Stale, who I snowboard with all the time and who’s a good rider, went to the Olympics when he was 16,” said McMorris. “It was so cool watching him there in the halfpipe. It was amazing and I can’t wait to have that feeling. I want to be there and it motivates me.”

Now in an Olympic qualifying year, McMorris and many of his fellow riders on the pro tour must refocus a lot of their energy into meeting the points requirements for Sochi by entering many more Fédération Internationale de Ski (FIS) competitions. Mark McMorris stands in second place on the podium of the slopestyle competition at the Snowboarding World Championships in Stoneham, QC. COC PHOTO/ALEX PARADIS

The transition into FIS events for an X Games and pro tour competitor like McMorris can be a difficult one. The courses are normally not as exciting or built to the liking for these riders leaving many competitors disgruntled and looking for future changes to better the sport.

McMorris went to Worlds with the purpose of moving closer to Sochi and he did that by winning silver, even if the course was not up to his usual standards.

“I’m critical because if the Olympics are the biggest thing than the events should be the best,” said McMorris. “The events that qualify you for the Olympics aren’t good and that sucks. You don’t see anybody doing this FIS World Tour until we have to. We do the World Snowboard Tour with the best contests and the best riders.”

“It’s just frustrating when they hold an Olympic qualifier and the course is below average. It was a relief to get a podium during qualifying rounds. It was a good feeling and really cool to do it in Canada where the support has been awesome.”

With the World Championships now in his rear view mirror, McMorris will focus on the 2013 Winter X Games this weekend is Aspen, USA and a highly anticipated matchup with Shaun White – he of the two Olympic gold medals and numerous X Games medals.

After a short absence from the sport, White is back to form and looking for X Games and Olympic supremacy once more and McMorris is looking forward to the showdown.

“Shaun is an unbelievable snowboarder,” said McMorris. “He’s just so good and his board control in unbelievable. I think he’s going to be a serious threat in slopestyle, but with the progression curve of all of us kids growing into our own I think it’s going to be a complete battle. It’s about who can be as consistent as possible. It’s going to be fun for us to be back competing. “

McMorris has had some great success as of late at the X Games. In 2011, he won silver in the slopestyle event and followed that up with double gold in 2012 in slopestyle and big air to become the first double event winner at an X Games since the aforementioned White in 2009.

“My best experience in my career was probably last year when I won the two gold medals at X Games,” said McMorris. “It was the top thing I could have done in my career at the time. It’s going to be hard to do it again, but I will try my best.” Mark McMorris soars through the air during the slopestyle competition at the Snowboarding World Championships in Stoneham, QC on his way to a silver medal. COC PHOTO/ALEX PARADIS

Don’t expect this easy going rider to feel stressed in the lead up to the Olympic Games as he competes in the other year round events. McMorris has surrounded himself with a close group of people, including his brother and national teammate Craig, to keep him humble and grounded at all times while keeping his mind busy with other objectives.

“It’s good to have something on my mind other than the Olympics or else I’d freak out,” said McMorris. “I’ve never focused on an event a year out. It’s always in the back of my head. It’s the big one for me. There’s pressure in every sport. If you’re at the top of your sport people are looking at you to do well. I like the pressure. Whenever I feel I need to do well, it seems to come together. It excites me. I feel like every time there’s pressure I do well. I can imagine what it will be like at the Olympics.”

And with that McMorris will continue his quest to realize a childhood dream of competing at an Olympic Games and medaling for Canada.

“For me to do well at the Olympics would be huge,” said McMorris. “Every kid dreams about i’;t. It’s so much bigger than everything else and a huge deal. I’m super happy to be Canadian and I can’t wait to hopefully represent the country in Sochi. It would be awesome to get a medal for Canada and I’m excited to have the country on my back.”

Check out Canada Snowboard’s Mark McMorris as he prepares for the 2013 X Games. The Games run from today through Sunday in Aspen, Colorado. You can find more of Mark`s videos at www.markmcmorris.com. 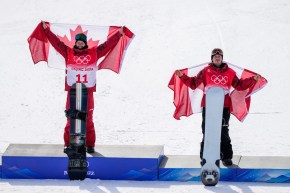 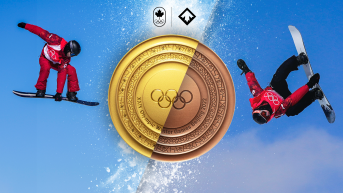