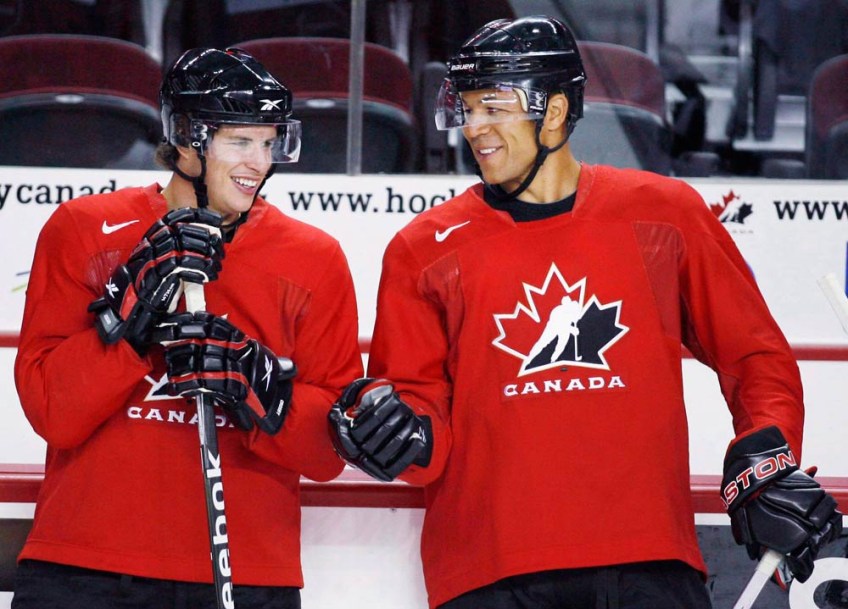 The hockey world is buzzing with the latest news that the National Hockey League, the International Ice Hockey Federation and the International Olympic Committee have agreed to allow NHL players to participate in Sochi, Russia.

For 2014, this means the best in the world will get the opportunity to represent their countries on the biggest stage – in true Olympic fashion.

The agreement allows NHL players to compete in a fifth consecutive Games after being included in 1998, 2002, 2006 and 2010. This bodes well for Canada as the defending champion. The lineup possibilities are encouraging with many members from the golden Vancouver team still in their primes and competing at a high level with their respective NHL clubs.

Canada has been proudly represented four times by some of the best players in history donning the Maple Leaf.  Below is our dream team, based on statistics compiled on Olympic ice as well as passion, patriotism and legacy. Sidney Crosby (Cole Harbour, NS) may have only participated in one Olympic Games, but he provided arguably the most magical moment during Canada’s modern hockey history. His “Golden Goal” moment in the dying seconds of the Vancouver 2010 final against the U.S. changed the Olympic landscape in this country and clinched the gold medal for Canada for the second time in three Olympic Games. A steady regular for Canada since the 2002 Salt Lake City Games, the Edmonton, AB, native holds the record for the most goals and points by a Canadian NHL player, to go along with his two gold medals. His mixture of size and grit are a perfect wing complement to Crosby. The two showed great chemistry in 2010, with Jarome Iginla assisting on the famed “Golden Goal”. Would any list be complete without The Great One? Wayne Gretzky (Brantford, ON) was 37 by the time he made his first Olympic Games appearance, but what he meant to the game of hockey – and for all of Canada — is unmatched to date. Just think of what he could have accomplished in Olympic arenas in the prime of his career alongside Crosby, Iginla et al.

SECOND LINE – The All Captain Line Our second line will be called the ‘All Captain Line’, comprised of three of the four captains of the Canadian Olympic Mens’s Ice Hockey Team. Leading the way in the middle will be Super Mario Lemieux (Montreal, QC). Lemieux may have only participated in one Olympic Games, but he was the captain of the team that ended Canada’s 50-year gold medal drought and finished the tournament in second place in scoring for the Canadians. Playing on the wing from his natural centre position will be another one of the all-time greats in Joe Sakic (Burnaby, BC). Sakic led the 2002 gold medal team in scoring with seven points and has compiled a total of 13 points over the course of three Olympic Games – good for second all-time amongst Canadians. Burnaby Joe also wore the ‘C’ for Canada at the 2006 Games. The captain of the inaugural 1998 squad and the team’s leading scorer, Eric Lindros (London, ON) was an international force to be reckoned with. Even though the majority of his points came during the 1992 Albertville campaign – 11 points in eight games – we must give a nod to the big centreman for the skill and talent he’d bring to any team. His size and goal-scoring touch made him a fit on any line.
**Denotes a player who competed in the pre-NHL Olympic Games

THRID LINE – The All Heart Line Only 21 at the 2010 Vancouver Games, Jonathan Toews (Winnipeg, MB) was originally one of the last picks to make the eventual gold-medal winning team. The Winnipeg, MB, native worked his way to the first line and led the team in scoring with eight points in seven games. His play earned him a spot on the tournament all-star team. One of the great hockey leaders, Steve Yzerman captured gold with the Salt Lake City team of 2002 after scoring six points in as many games. Yzerman (Cranbrook, BC) was an assistant captain in 1998 and 2002. He was the architect of the 2010 team as the General Manager and will also be in charge of the team selection in 2014. Paul Kariya (Vancouver, BC) is another player, like Lindros, who made his mark pre-NHL involvement at the Olympic Games. But the speedy winger earned a silver in Lillehammer in 1994 while leading the team in scoring. Eight years later, he came back to join the team and win gold in Salt Lake City.
**Denotes a player who competed in the pre-NHL Olympic Games Dany Heatley’s 10 points over the course of two Winter Games cannot be denied. The native of Calgary, AB, more than doubled his point tally from 2006 to help Canada capture gold in 2010. At a hulking 6’4” and 220 lbs., Heatley is an internationally dominant winger on a line capable of shutting any opponent’s best players. Ryan Getzlaf was another young addition to the Vancouver team at age 24. The Regina, SK, native had a great tournament – seven points in seven games – to help Canada win the gold medal. The big centreman plays the role of a power-forward on this line and brings size along with his scoring touch. Joe Nieuwendyk (Oshawa, ON) is another great addition to a fourth line as a premier two-way forward who could score with the best of them. A checking-line centre from the 2002 gold medal team, Nieuwendyk brings big-time skill in the face-off circle during high-pressured moments for this team. A 2002 gold medal winner, Ryan Smyth’s (Banff, AB) Olympic stats will not blow anyone away, but he has been added on our team due to the incredible intangibles he brings every day. He’s been nicknamed “Captain Canada” for his incredible dedication to the national team and his peskiness would be a great addition to a fourth line. Chris Pronger (Dryden, ON) is the only hockey player to step on the ice in every game for Canada at the Winter Olympics from 1998 to 2002. He owns the record for most games played (25) and most points (9) from Canadian a defenceman. A towering presence on the back end, Pronger was an assistant captain from 2002 to 2010, capturing two gold medals. A fluid-skating defenceman, Scott Niedermayer (Edmonton, AB) makes a perfect pairing with Pronger. Niedermayer’s speed and quickness match well with Pronger’s physicality. Niedermayer played in two Olympic Games and won gold in both, while acting as captain for the 2010 team. Rob Blake (Simcoe, ON) played 18 games over the course of three Winter Olympic Games and was a member of the 2002 gold medal squad. His skill as a power-play quarterback would make him a perfect pairing with another defenceman who has a big shot.

When thinking about big shots, none may be bigger than that of Al MacInnis (Port Hood, NS). The defenceman carried one of the most feared slapshots in the history of the game and used it over the course of a 12-game Olympic career in which he won a gold medal in 2002. Adam Foote (Whitby, ON) was known as a steady shutdown defenceman over his career and would provide great skill to any defensive core. The Olympic veteran played 18 games over three Winter Games, won a 2002 gold medal and was an assistant captain of the 2006 team. Shea Weber (Sicamous, BC) dazzled in 2010, scoring six points during the tournament – good for second among defencemen – which earned him a spot on the tournament all-star team in the process. The then 23-year-old was rewarded with a gold medal when Canada defeated the US 3-2 in the final. Statistically perhaps the greatest goalie in NHL history, Martin Brodeur (Montreal, QC) was the only goalie to be selected to all four Olympic Teams. He played in 14 games overall and entered the tournament as the No. 1 goalie from 2002 to 2010. His four wins and miniscule 1.80 GAA average helped Canada break its 50 year gold-medal drought in 2002. Brodeur is the winningest Canadian Olympic goalie of the NHL era with seven victories. Roberto Luongo captured the imagination of Canadian hockey fans as he took the national team all the way to a gold medal in 2010 after a slow start. The native of Montreal, QC led Canada to five consecutive victories in five games with a sparkling 1.51 GAA. Over two Winter Games, Luongo is credited with six wins and a 1.69 GAA without a loss. The disappointment of Canada’s fourth place finish in Nagano cannot be placed on Patrick Roy (Quebec City, QC). Roy holds the Canadian record for smallest Goals Against Average at the Winter Games with a 1.46 GAA over six games. He recorded one shutout in his only Olympic Games appearance, winning four games. How about a two-headed coaching duo led by Mike Babcock and Pat Quinn to guide this star studded team? As the only two men to capture gold behind the bench for Canada, their mix of knowledge and ability to manage a team filled with stars would be valuable for a dream team tournament scenario.