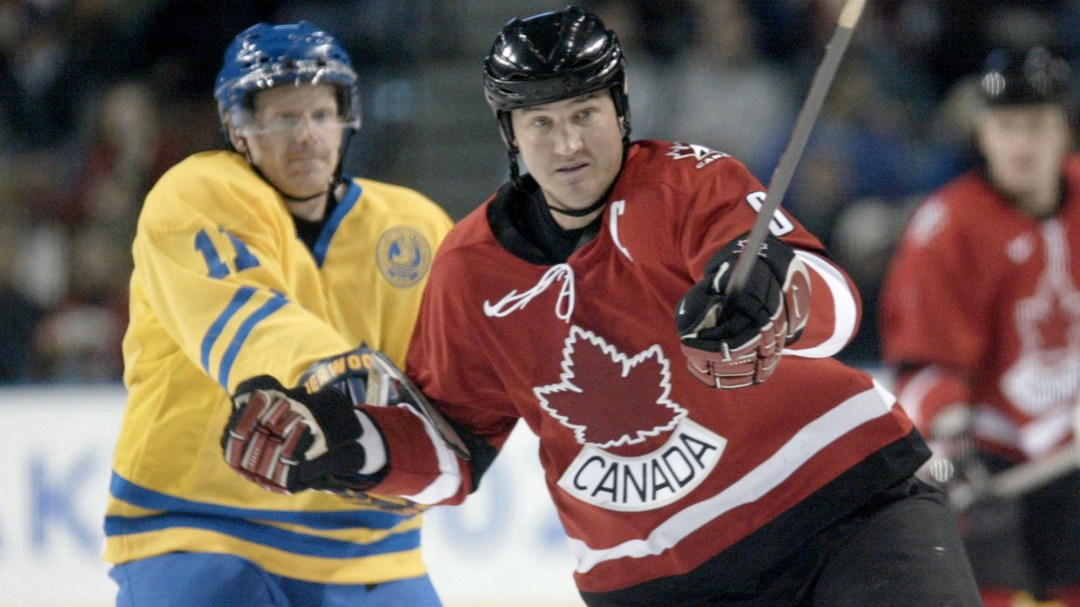 A tough start to the Olympics raised fears that the Canadian men wouldn’t end the 50-year gold medal drought in ice hockey, though Canada peaked at the right time to defeat the United States 5-2 in the final at the Winter Games in Salt Lake City.

The teams were tied 2-2 before a pair of Joe Sakic goals on either side of Jarome Iginla‘s second tally secured the gold for Canada. The first Canadian goal was scored by Paul Kariya, benefitting from a famous Mario Lemieux faked shot, where he unselfishly passed up a chance to score the goal himself, allowing the puck to go between his legs for a wide-open Kariya to pounce.

In officiating, it was a reversal of the women’s final with a Canadian referee in charge. Though the power play advantage in the women’s final was nearly 10 minutes longer for Americans, in the men’s final Canada enjoyed only a two minute (8-6) advantage. The hockey finals also brought the “lucky loonie” to the collective Canadian imagination. Icemaker Trent Evans  buried a Canadian one dollar coin at centre ice and it was only revealed by men’s executive-director Wayne Gretzky after both Canadian teams secured gold in Salt Lake.

Much of the 2002 jersey was covered in the October 3 post on the women’s triumph, however Canada had four sweaters (the fourth being a full black fan’s jersey) for the Games, the most intriguing perhaps was the first ever introduction of a third jersey in the summer of 2001.  The heritage patch on each shoulder of the primary red and white jerseys moved to the front of a full red sweater (as seen on Mario Lemieux on the featured image above), which was worn on a limited basis and never until February of 2002. Regardless of what jersey Canada had on in Salt Lake City, both the women and men (as Martin Brodeur shows below) returned home with golden accessories that goes with everything. Mario Lemieux made his Olympic debut at Salt Lake City 2002. He served as Team Canada’s captain as they captured...