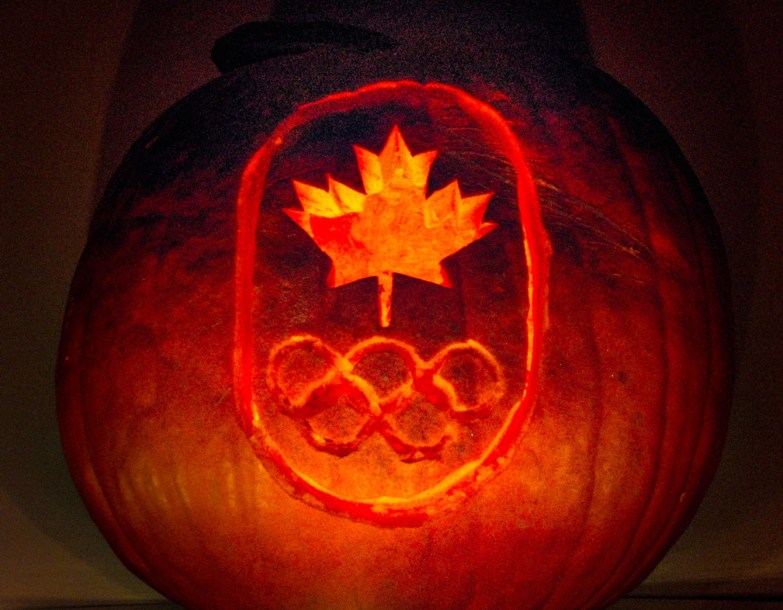 Halloween – a perfect time to enjoy the thrill of the fright. In honour of this spooky celebration, we compiled the top 5 scariest Canadian Olympic moments. Thankfully these stories have happy endings.

It should have been an easy game for Canada against Germany. Canada was leading 3-2 when Germany tied it with 2:22 to go in the third period. The 10-minute overtime was scoreless, so the game went to a shootout. After Eric Lindros gave Canada the lead in the sudden death phase, it came down to goaltender Sean Burke to seal the victory. The puck squeaked through his pads but wobbled and came to a stop on the goal line. The upset averted, Canada would go on to win the silver medal.

Canada’s rink skipped by Sandra Schmirler was trailing Great Britain 4-3 after seven ends. A score of two in the eighth put Canada up 5-4 before British skip Kirsty Hay tied it in the tenth. In the extra end, Schmirler’s draw on last rock provided plenty of drama as it inched just inside the closest British stone, putting Canada into the gold medal game, which they went on to win. Canada was leading 2-1 when Zach Parise tied the game with 25 seconds to play in the third period. We all know what happened after that. Is there anything scarier to an athlete than equipment failure? Sara Renner experienced just that when she had a pole snap during her opening leg. Luckily Norwegian coach Bjørnar Håkensmoen quickly handed her a new one, and although it was about 12cm too long, it helped Renner maintain contact with the lead group until she could make the handoff to Beckie Scott.

After Nancy Greene had skied what looked like a perfect race, she turned to the electronic clock for her time, only to see that the numbers were still moving. She later recalled “My heart almost stopped. I thought, ‘I’ve just skied the race of my life and they missed my time.’” After a couple of seconds, the clock malfunction was fixed and her winning time was posted. Well known for centering the Philadelphia Flyers’ “Legion of Doom” lineup, Eric Lindros developed a reputation for being a physical forward with…