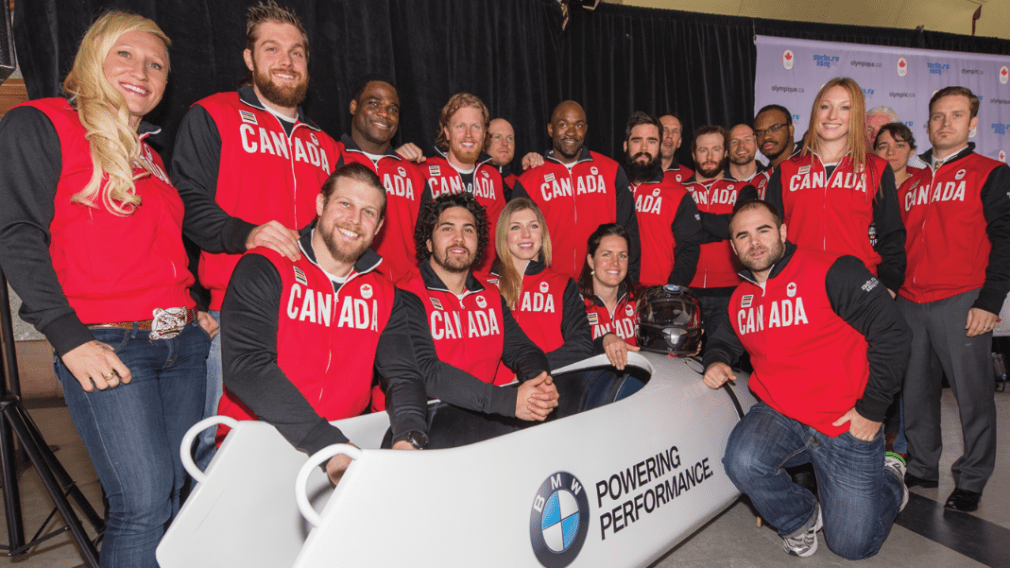 Canada will be fronted by veteran bobsleigh Olympians with podium experience, at the upcoming Olympic Winter Games in Sochi, Russia. The team was officially named today at an event in Montreal. The men’s side is flush with Olympic experience. In addition to the 2010 medallists, brakemen Jesse Lumsden, (Burlington, ON) and Neville Wright, (Edmonton, AB) are back. Piloting in addition to Rush will be Chris Spring (Calgary, AB) who competed at Vancouver 2010 for his native Australia and Justin Kripps (Summerland, BC) who was a brakeman at Vancouver 2010 before learning to drive a sled. Bryan Barnett (Edmonton, AB), a newcomer to bobsleigh from the world of athletics, competed at Beijing 2008 in the 200m. The women that comprise Canada-1 have been very good on the World Cup tour this fall, already with three medals, (two gold, one silver), in four races.
The results are certainly encouraging. In five races before the holiday break in 2009, Humphries and Moyse had only one gold and one bronze. Of course, the duo went on to win gold in Whistler at Vancouver 2010. This year has been a better start. Earlier this year, Humphries talked about the synergy with Moyse. “When Heather came back this summer, everything just felt so comfortable right away and I have nothing to worry about.” Moyse adds, “Nobody puts more pressure on us to win than we do ourselves.”

Coach Tom De La Hunty is confident in his lead pilot, “Nobody has ever dominated the sport this way and likely won’t for years to come because I believe Kaillie will continue to dominate,” he said after a recent World Cup podium.

On the men’s side of the maple leaf competition is fierce. The big pushers are preparing for Sochi for both the four-man and two-man races. While the big sled has been a work in progress, Chris Spring and Jesse Lumsden won a two-man bronze medal in Calgary.

“Chris Spring is a superstar and I am thrilled to be in his sled. We have a lot of work to do, but we have set the pace for the season.” said Lumsden after the November home World Cup. Veterans Humphries and Rush lead 2014 Canadian Olympic Bobsleigh Team
Le May Doan’s Olympic dream is to help Team Canada athletes achieve theirs
What is the difference between racquetball and squash?
Adventure, culture and food: 9 things Peru is famous for
Shuttlecock and balls: The fastest moving objects in sport
Softball star Sara Groenewegen: “Being an athlete saved my life”