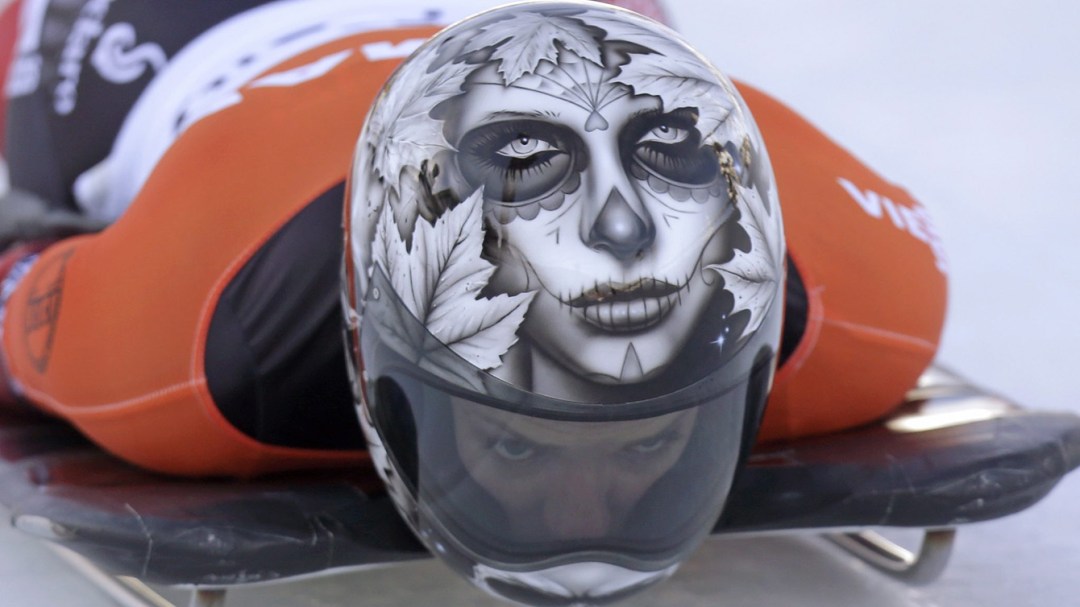 Skulls and Bones: The helmets of Canadian skeleton athletes

The helmet is for many sports a method of self-expression. A hockey goalie has all the space around the cage, and in Olympic BMX the cyclists have freedom to design their protective shells.

Beyond the colours, the physical helmet itself is a statement. For skeleton athletes the helmet shows fearlessness. Even wearing a blank one proves something.

Today Canada called on four more athletes to don the helmet, and race for us at the Olympics. Following back-to-back men’s gold in 2006 and 2010, it will be Kelowna’s Eric Neilson and Calgary’s John Fairbairn who will aim to defend in Sochi.

Twenty six-year-old Sarah Reid of Calgary and Eckville, Alberta’s Mellisa Hollingsworth will both try to improve on the latter’s bronze from Turin 2006. Every helmet has a story, on the surface or underneath. Here are theirs: I had been wanting to get my helmet painted for quite a while, and originally wanted an image that I found off the internet of a girl’s face that was half normal, half skull. Jason Bartziokas in Jasper suggested doing an image that was more symmetrical as the main image on the top of the helmet, because he said that would register a lot better from far away. I told him that what I liked about the other image was the fact that it was kind of feminine, but still kind of scary and deadly looking. He recommended I look up ‘day of the dead’ images on the internet, and when I found one I liked I sent it along to him. -Sarah Reid The story behind mine was pretty much that I wanted a very “bad ass” helmet.  I know you can’t put that in a write up, but that’s what I wanted.  It’s pretty much a “Demon Head” helmet that is on fire and is breathing fire out of the mouth that are skulls.  I’m not artistic at all so all I had was an idea that I wanted a scary skull design, and Jason pretty much ran with it.  He gets all the credit for it.  He went above and beyond what my expectations were.  I do think he made a helmet that embodies me perfectly though.  I am a very easy going guy, but when it’s time to train at the gym, or the helmet comes on for sliding, there is a different side of me that’s not as fun-loving.  To me it’s all business. – Eric Neilson

Mellisa’s helmet was done by Voodoo Airbrushing in Ontario. The idea combines skeleton and horses, explaining the horse skull. Then there are the six rodeo events on her chin guard. All stencils are lifted from actual photographs of her friends family and even Mel barrel racing. Finally, there are “ghost” maple leaves in the background. My story is that my last name is a little tricky to pronounce properly, and lots of people get it wrong. When we were racing in Königssee, Germany a few years ago, the track announcer called me “John Fair-brain”. My teammate, and now coach Keith Loach, picked up on that and started calling me Fairbrain, which eventually got shortened to Brain. I’ve always been the smart/nerdy guy on the team and so that totally fit with who I am. I had mine painted by Gerald McLaughlin with Voodoo Airbrushing in Pickering, Ontario. – John Fairbairn

So I think the Canadian team's helmets are ready for our world cup race on Friday. @Skelly_Rider @JohnnyFairbairn pic.twitter.com/RI7xmWB0W9 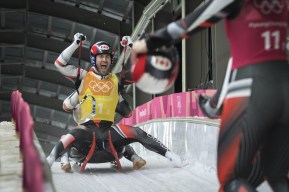 Feel the speed with Canada’s luge and skeleton athletes

John Fairbairn was the top ranked Canadian in the men’s skeleton event at Sochi 2014, finishing seventh in his Olympic...