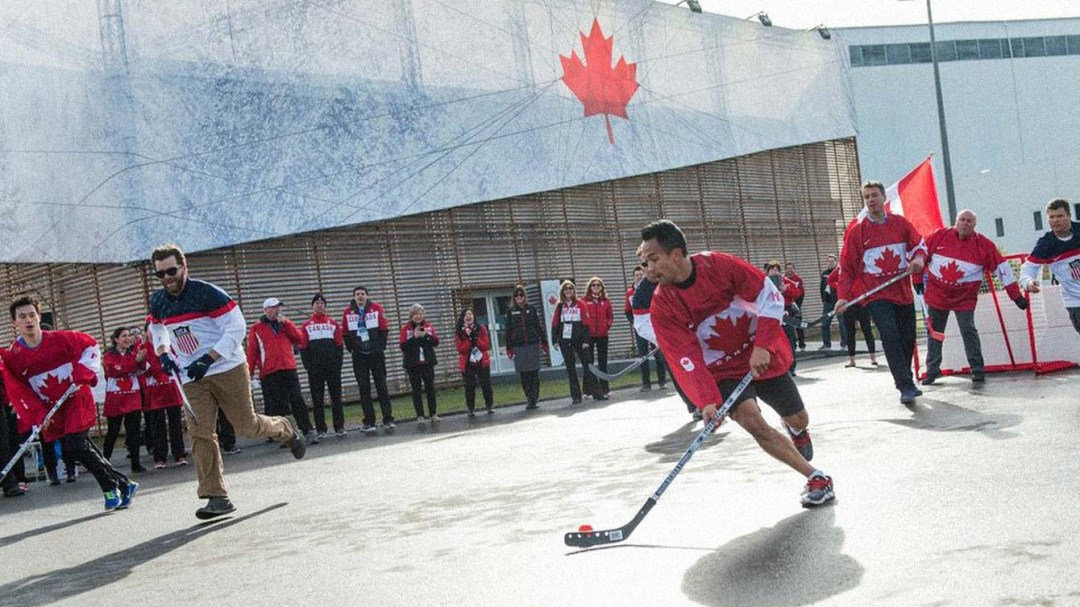 Game on! Canada vs. USA street hockey breaks out in Sochi

Less than a hundred feet separate the official Canadian and American Olympic Houses in Sochi. So far, the two nations have co-existed peacefully in their new Olympic neighbourhood. But with both headed into the Women’s Gold Medal game tomorrow night, and the men on a possible collision course in the semi-finals on Friday, a dustup was inevitable. It finally came in the form of a street hockey game this morning inside the Olympic Park, played to an overtime four-all tie. Retired NHL zebra Terry Gregson officiated the game. He’s seen here at the first actual face-off, where this time the US rule-bending saw Chan matched against retired 16-year NHL veteran Bret Hedican – let’s face it, they needed a ringer in order to be competitive. Chan tripple-Salchow-dangled, then scored. It was pretty amazing. You kinda’ had to be there. Canadian Olympic Speed Skater (and bestest teammate ever) Gilmore Junio is seen here about to score. If this had been on ice the American in the shot would have been torn in half. Tragedy averted. Thanks asphalt. Canadian Olympic Committee CEO Chris Overholt pocketed two goals of his own before jumping over the American goalie and crushing USA House with his sweet Adidas kicks. Canadian Chef de Mission (that means “Mission Chief” in USA talk) Steve Podborski is seen here regrouping on the bench with Chan and Junio, who looks like he’s ready to drop the gloves – there are no ties in speed skating. Some Americans scored the other goals… we weren’t really keeping track because most of them were questionable. Regardless of the score, now that the first puck (err, ball) has been dropped… it’s game on! Enjoy more photos below of pure Canadian street hockey awesomeness.