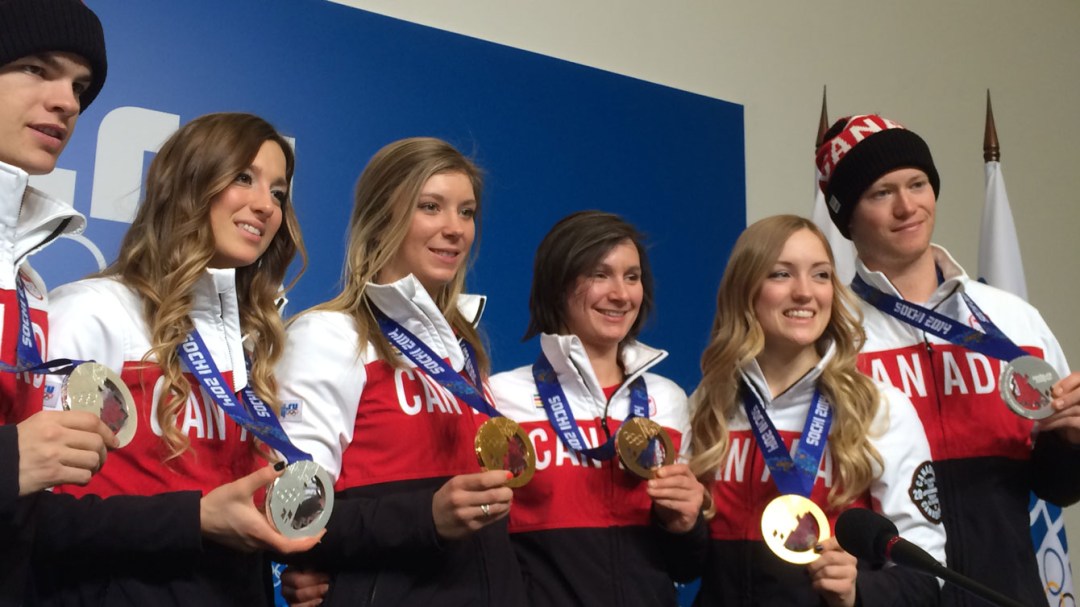 SOCHI, Russia – Of Canada’s 24 medals at the Sochi 2014 Olympic Winter Games heading into the final day, athletes from the Canadian Freestyle Ski Association can lay claim to seven.

With men’s hockey, Canada will win at least 25 medals in Sochi and 28% of them will have come from moguls, slopestyle and halfpipe – all freestyle ski disciplines.

On the penultimate day of the Games at Sochi’s main media centre, to discuss their incredible achievements that brought tremendous joy to Canadians, freestyle skiers and their outgoing boss assembled at Chekov Hall.

RELATED: Another 1-2 for Bilodeau and Kingsbury

Now, Anton Chekov’s play Three Sisters certainly wasn’t about Canada’s Dufour-Lapointe family and if you’re familiar with the Russian classic, the Prozorov family’s girls probably would’ve struggled to fly on skis (what with their hopes constantly being grounded – a common theme in Russian storytelling).

Canada’s three sisters of freestyle skiing aren’t suffering from diminished dreams. All three of them are at the Olympics together, and two of them – Justine Dufour-Lapointe and Chloé – stood 1-2 on the podium in ladies’ moguls.

“Me and my sisters and my family, we’ve been through this big event together,” Justine said, “I don’t think I could have come here alone, and all of those people who helped me, I just want to say thank you.”

“Just being with my team and enjoying the Games, but of course getting the medal and being on the podium with my sister was my biggest memory. I will always remember this moment.” The father figure who helped shape the organization for success is chief executive officer Peter Judge. He will soon be leaving to help strengthen all of Canada’s winter sports through Own The Podium, seemingly having perfected the blueprint for making the most out of modest means.

A man of reassuring demeanour, Judge humbly distributes credit to those around him, even as they are constantly singling him out for praise.

“Success doesn’t happen in isolation. I’m extremely privileged to be a part of a phenomenal group of athletes at a phenomenal time in our sport, and a phenomenal staff.”

During Games time, the focus is so heavily placed on the performance of individuals that other elements to building a champion can get glossed over. Judge reminds the gathered audience of the complete program.

“The most important part of success is intellectual property. We’ve got 12 coaches who are directly related to this programme and who work with these athletes on a regular basis. They have over 220 years of experience between them.”

Then of course, that recurring theme…

“Our team is really largely about family. I think we’ve seen that with the Dufour-Lapointe sisters. To get three siblings on a national team is a significant accomplishment.”

Though he couldn’t be there in person, freestyle skiing’s top Canadian ambassador, 1994 men’s moguls Olympic champion Jean-Luc Brassard, joined the conference by phone and made it clear that their work continues.

“I am thrilled for the future. Our success will bring more kids into the sport.”

If Brassard’s assessment is correct, Canadians could expect a few more medal celebrations in these disciplines at Olympic, World Cup and X Games events for years to come.

NOTE: By international count, Canada technically has nine Olympic medals in freestyle skiing through the 1-2 finish in ladies’ ski cross by Marielle Thompson and Kelsey Serwa. However, that discipline nationally falls under the auspices of Alpine Canada.

Matt Margetts did not start dreaming about competing at the Olympic Games until ski halfpipe was officially added to the...