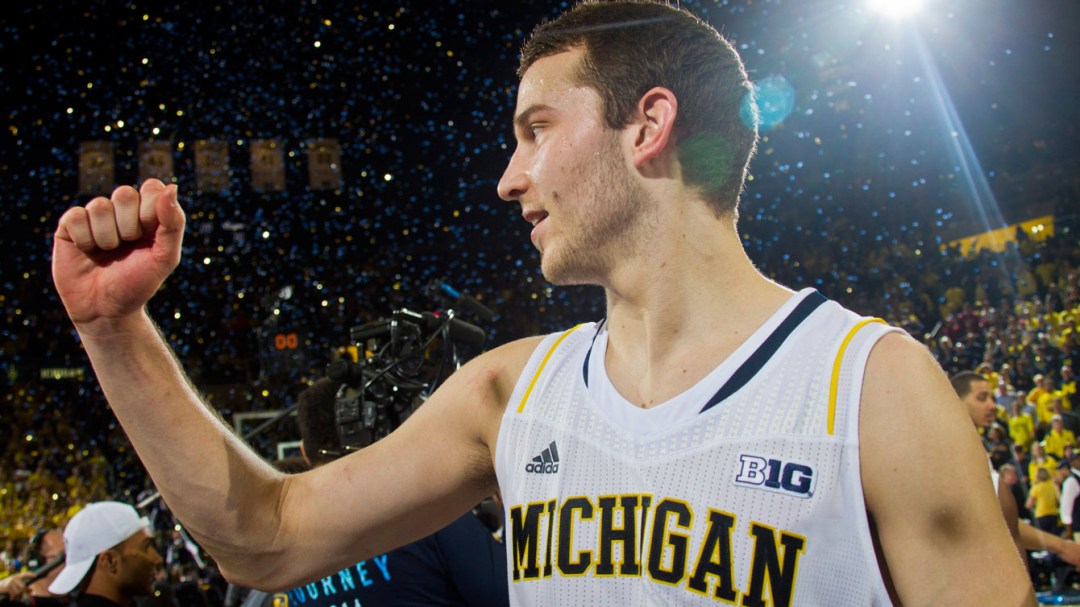 Turnovers nearly did in the Midwest bracket’s second seed Michigan, a team that led 45-34 at halftime and by as much as 15 points with less than 11 minutes remaining. The madness was stemmed with Michigan, a finalist in last year’s NCAA Men’s Basketball Championship, going through as one of the final eight teams left in the tournament.

Stauskas made the nightly highlight reel with an innovative off-the-backboard pass that set up a teammate for a three-point attempt – see it here.  The 20-year old shooting guard from Mississauga, Ontario is winner of the 2014 Big Ten Player of the Year award, the highest individual honour in Michigan’s conference. Nik Stauskas reacts after hitting a three in the NCAA tournament.

The second year player has increased his points per game production to 17.3 this season from 11 when he was a freshman. A three-point specialist – to use the term mildly – Stauskas is averaging 15.3 points during the tournament, where he has made 43.4 percent (10 of 23) of his three-point shots. His regular season average was 44.8 (90-201).

RELATED: Canadians in the NCAA tourney

While Stauskas moves on, the same can’t be said for Canadian pair of Melvin Ejim and Naz Long with Iowa State coming out of the East Region of the tournament bracket. The third-seeded Cyclones were the latest victims of number seven Connecticut in an 81-76 final.

Ejim, the team’s leading scorer in his senior year of college with an average of 18.1 points per game, was held to just seven points, as was Long coming off the bench. With Ejim and Long joining the likes of heralded Canadian U.S. college players Andrew Wiggins (Kansas) and Tyler Ennis (Syracuse) on the sidelines, the only other Canadian still in the tournament along with Stauskas is giant-killer Dayton’s Dyshawn Pierre. His Flyers have beaten three straight higher seeds coming out of the south region.

Pierre – a small forward from Whitby, Ontario – and Dayton face heavy favourites Florida on Saturday night with an eye to an upset and a trip to the coveted final four.

Stauskas returns with Michigan on Sunday to face Kentucky, the team that ousted defending tournament champion Louisville in its previous outing.