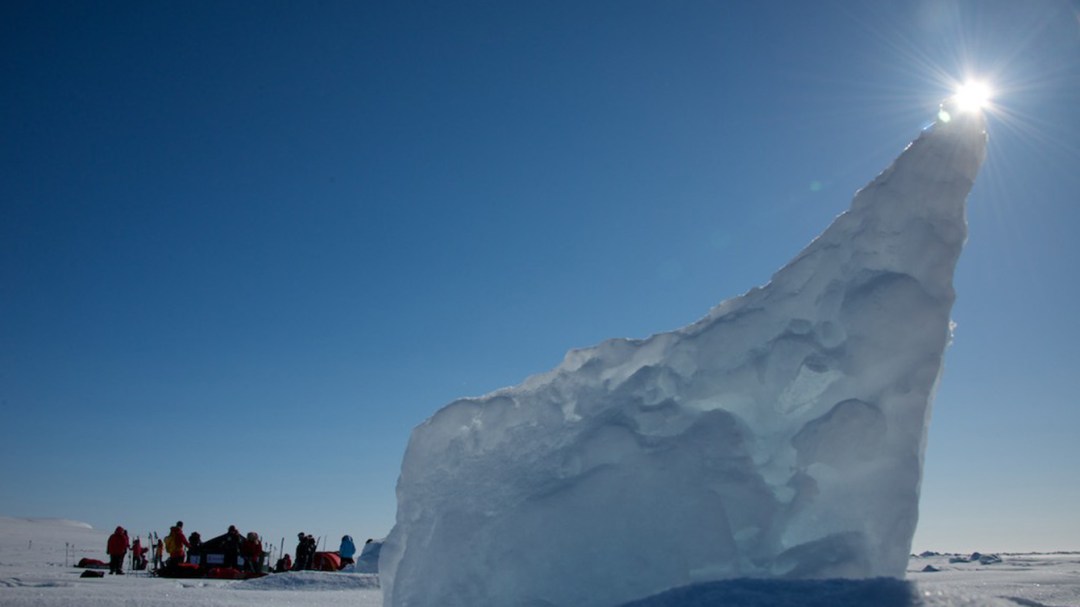 Olympic champions Caroline Ouellette and Geneviève Lacasse are off on their trek to the Magnetic North Pole, and it’s getting real.

On a sat. phone from King Christian Island, Lacasse laughed when asked how she was doing after day one, “Surviving,” was her reply. The two are among 53 warriors, trekking through 24-hour daylight by ski, dragging sleds up to a couple hundred pounds in weather as cold as -35 Celsius. For over ten days.

“It was an interesting first night in the cold,” commented Lacasse. Naturally, the biggest struggle is staying warm. “We have a Nalgene with hot water in it, you keep it on your stomach, put it on your feet, whatever is cold,” said the goaltender.

“The sleeping bag is just an insulator so if you bring no heat into it it’s not going to get warm.” – Lacasse

Ok, but night doesn’t mean much in the Arctic, even in a tent. The sun shines, 24-hours a day. Lacasse has a strategy for this, “Sleep with a balaclava on, full clothes and toque. You put your toque over your eyes,” she says. The former Providence College Friar doesn’t yet have a go-to move for generating sleeping bag heat. “I’m still trying to figure that one out,” she says. Beginning of the day

“We wake up at 7:30 am, the first thing is to get dressed as fast as possible,” says Caroline Ouellette, an RBC Olympian. There’s a main camp tent, where breakfast happens. Oatmeal, crackers, coffee and tea hit the stomach first. Water is everywhere. In snow or ice format, which is boiled first and put in water bottles. “It’s quite a long process,” comments Ouellette who said it takes three to four hours to tear down and start skiing.

“It’s really getting us out of our comfort zone, we’re always in the warmth in the way of the rink. I have much more appreciation for our explorers who do this as a passion.” – Ouellette

All gear, food, water and camp is packed in sleds that can be up to a couple hundred pounds. Everyone also has a pack that is 30-40 lbs. “It’s quite heavy to pull the sled but I think we can manage this with our training,” said Ouellette. Raising awareness for the needs of Canadians veterans.

“We get to meet so many incredible soldiers. As athletes sometimes we have little injuries and we think it’s the end of the world and it’s nothing to what they have experienced. When you’re cold at night and you get scared because you don’t know if you’ll warm up, I can’t imagine being in a war and how scary that must be.” – Ouellette

Shaun Francis, the chair of True Patriot Love, seems to like these kinds of adventures. In 2012 he climbed a 6189 metre Himalayan Peak near Everest. He says this challenge is entirely different, “We’re fighting the cold all the time. Everything takes longer. You think slower. The cold is constantly with us, there’s no escaping it so you have to mentally deal with it and have the systems and gear in place so that you can survive it.”

“Being on the Arctic Ocean is just incredible, you can see forever. It’s amazing to think this is all inside Canada” – Francis

Another threat to the group, polar bears. Francis assures us no hockey players will become bear food, “They’ve had close calls with polar bears but no one’s been eaten by a polar bear,” he said, of previous trips. The group has a bear dog and is armed. But mainly just to scare away the animals, who usually avoid big groups. “I think it would actually be a plus if we do see a polar bear, folks are looking forward to it.”

“Everything freezes so we want to thaw it really quickly,” says Ouellette.

Army ration doesn’t sound appealing, but that’s where you’re wrong! “It was really, really good. I was surprised, it’s a packet that is sealed together and you put it in boiling water and it warms up and it’s ready to eat. It was quite delicious,” said Ouellette, we’ll take her word for it and count her as very brave.

The group aims to arrive at the Magnetic North Pole by Friday, May 2. Photos courtesy: True Patriot Love Ouellette at a community hockey game prior to departure