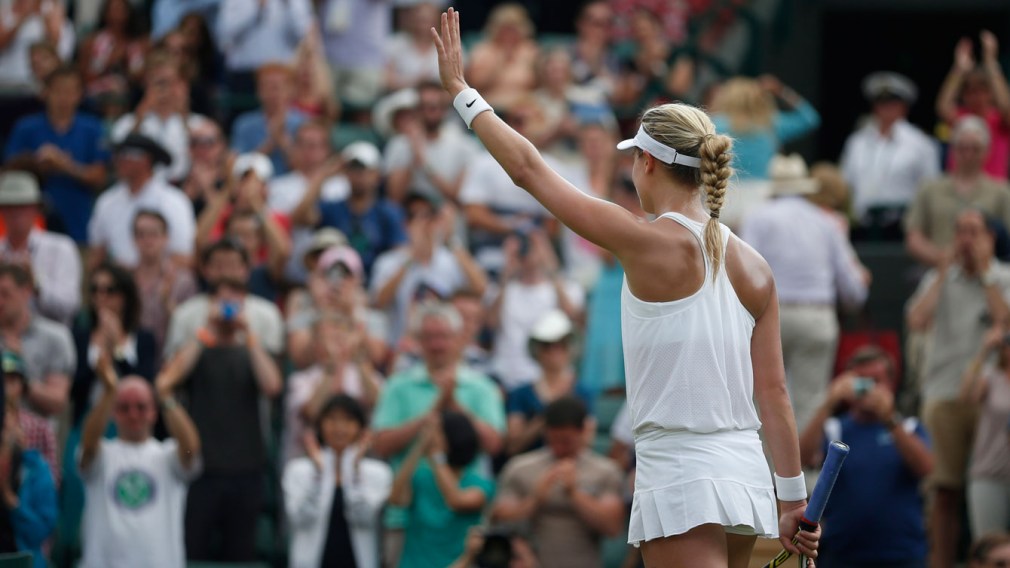 After making history as the only Canadian singles player to reach the final of a Grand Slam in the open era, Eugenie Bouchard was beaten by Petra Kvitova of the Czech Republic at the ladies’ Wimbledon final 6-3, 6-0 on Saturday.

Despite the loss, Bouchard will scale new heights on Monday, improving her women’s world ranking by six places to seventh, the highest ever for a Canadian singles player. At this point a year ago Bouchard was 66th in the world.

That may be cold comfort to Bouchard, a highly competitive athlete who expects to be the best in the world. At 20, Bouchard may one day get there but on Saturday one challenger showed she will stand in the way. Fifth seed Kvitova, 24, sprinted ahead 3-1 in the opening set as she seemed to adjust quickly to Bouchard’s serves, displaying her power to take the third game from the Canadian, then consolidate with a jaw dropping backhand winner when the point seemed lost.

Facing the possibility of being down two break points, Bouchard fought hard to hold in the next game, but the threat returned again and this time Kvitova’s powerful returns overcame the Canadian’s resistance. At 5-2, Kvitova failed to close out the set but managed to break Bouchard again for the early lead.

Hope @geniebouchard knows how many athletes & individuals she has inspired on her journey. I am certainly 1 of them! #GenieArmy #rolemodel

Down a set, Bouchard had to dig deep and limit her mistakes in the second set, but once more Kvitova simply didn’t allow any breathing room, holding serve then consolidating a break for the second time in the match to put the Canadian in an early 3-0 hole.

The Czech player delivered a near-flawless defensive game including an array of cross-court winners with unimaginable angles, combined with booming serves and taking the match in a most decisive fashion no matter how hard Bouchard tried to reverse the tide.

Good news, fellow Canucks – no need to hit the gym this morning. @geniebouchard worked hard enough for all of us. #GenieArmy

A visibly confounded Bouchard had only praise for her opponent, saying “first of all I’d like to congratulate Petra, she played fantastic these two weeks.”

“It was really tough for me today,” Bouchard said addressing the crowd, “but I’m proud of how I’ve played this whole tournament, I love coming back to Wimbledon, so thank you guys.”

Applause broke out at Centre Court before Bouchard could finish her sentence. The Canadian beat four seeded players, including two ranked higher than her, on way to the final. It’s the third time in as many Grand Slams this year – her second as a pro – Bouchard reached at least the semifinals.

Perhaps putting her tournament in perspective while courageously beating back the disappointment of the day, Bouchard told Centre Court “I feel like it’s a step in the right direction, I don’t know if I deserve all your love today but I really appreciate it.”

The crowd roared again assuring her that the love affair continues.

Bouchard beaten by dominant Kvitova in Wimbledon final
Ana Padurariu: Facing the never-ending challenges of 2020
What is the difference between racquetball and squash?
Shuttlecock and balls: The fastest moving objects in sport
Team Canada Athletes Train at Home
Getting vertical: The highest jumps in sport