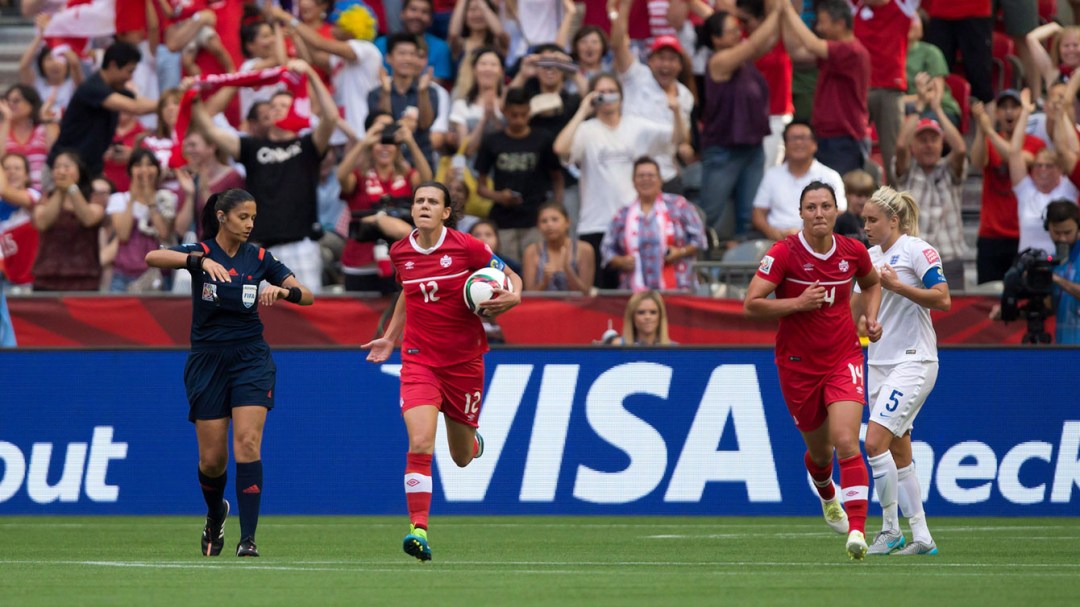 A strong start quickly turned into a two-goal disadvantage in the FIFA Women’s World Cup quarterfinals, a deficit too far for Canada in a 2-1 defeat to England on Saturday.

Before England took a 2-0 lead, Christine Sinclair had the BC Place crowd on its feet, dribbling up the right side keeping the ball inside the touchline with two crowd-pleasing nutmegs. The Canada captain then crossed the ball to a streaking Melissa Tancredi on the left side with space, but the ensuing shot from the advanced player was well off the mark.

When it looked as though Canada had all the momentum, things went sideways quickly for the host nation. 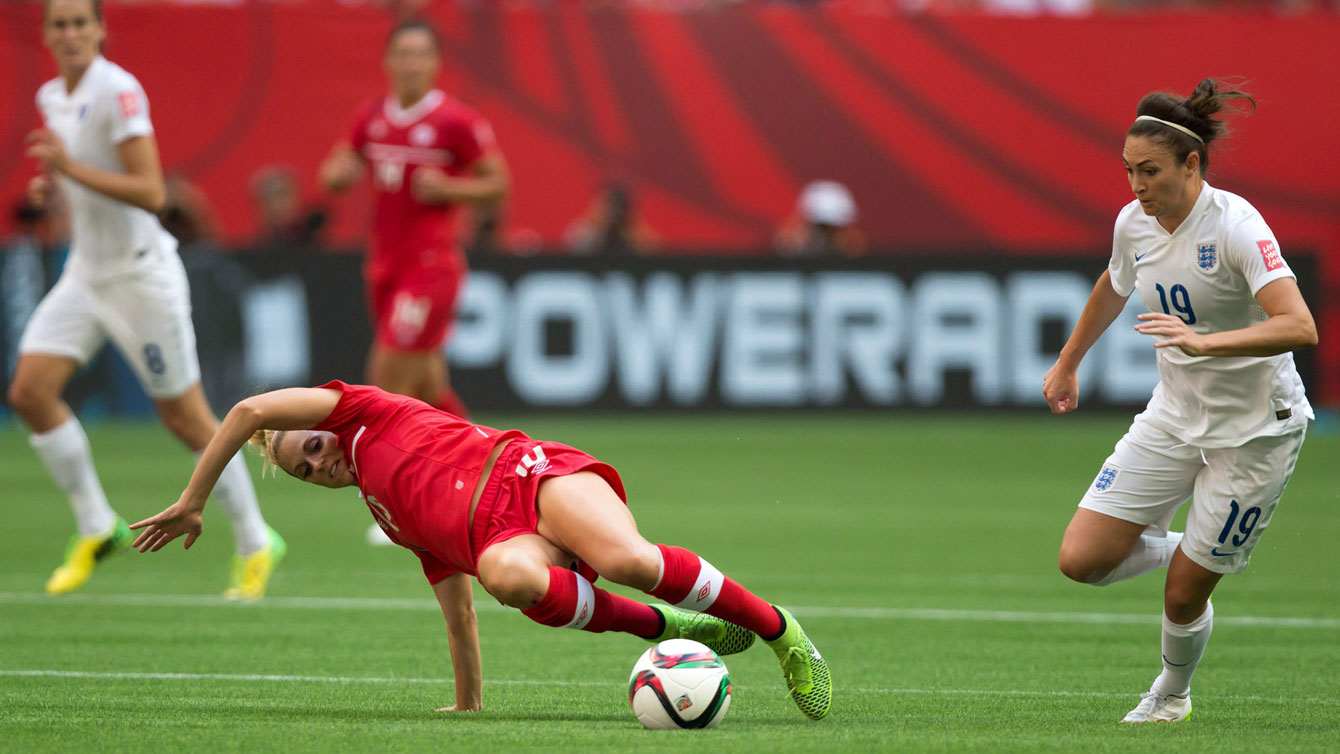 Lauren Sesselman slips and Jodie Taylor takes advantage to give England a 1-0 lead over Canada at the FIFA Women’s World Cup quarterfinals on June 27, 2015.

At the 11th minute, Canada defender Lauren Sesselman lost the ball to England forward Jodie Taylor while misplaying a pass. The opportunistic Englishwoman didn’t waste the golden opportunity, running toward the area, avoiding a desperate lunge from Allysha Chapman and firing a low shot past Canada keeper Erin McLeod for the 1-0 England lead.

Three minutes later the disaster doubled for Canada. After a foul on Taylor by Sesselman, Fara Williams floated an English free kick into the Canadian box. There, Lucy Bronze met the offer and headed the ball over McLeod, hitting the underside of the crossbar before it landed behind the goal line to make it 2-0 for England. 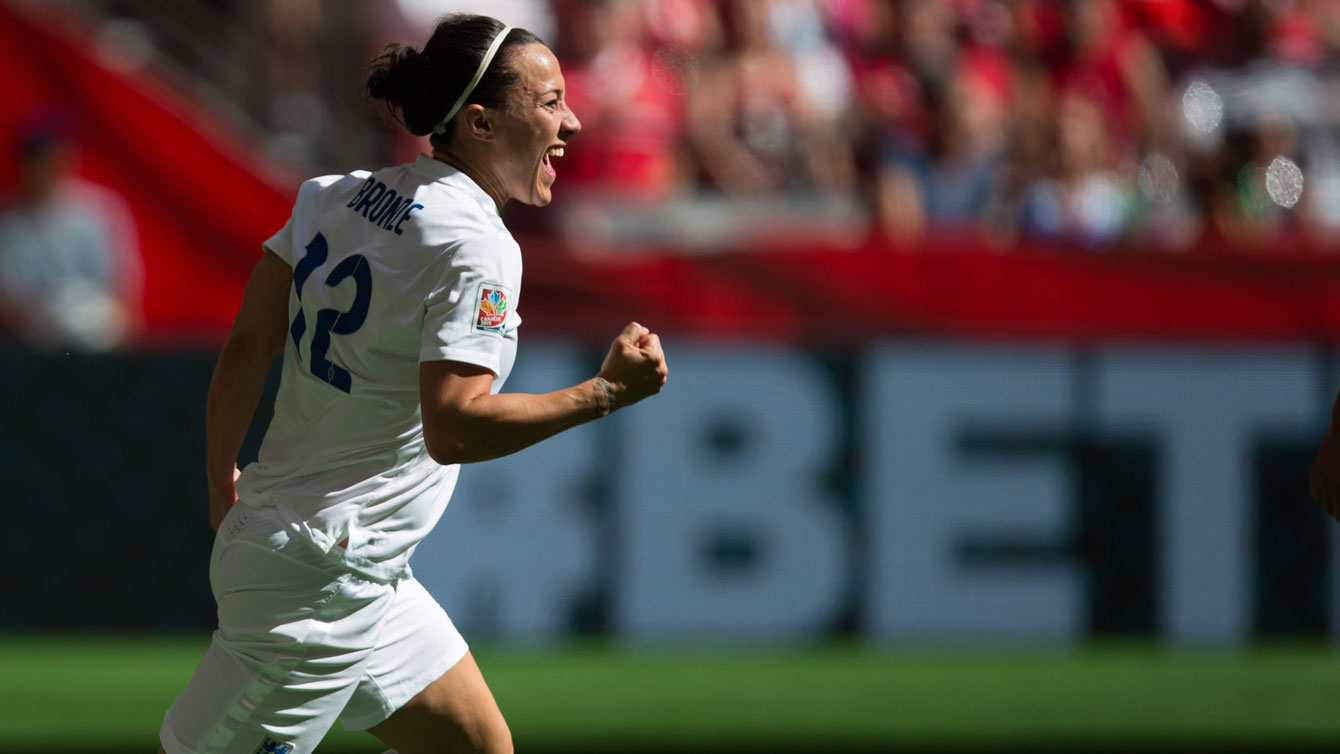 Lucy Bronze celebrates her goal against Canada to make it 2-0 England in the quarterfinals of FIFA Women’s World Cup on June 27, 2015.

Sinclair called a quick team huddle before restart and Canada responded with Tancredi and its captain each having a go at goal in the next few minutes to no avail, though Canada would get some momentum back three minutes to intermission.

England goalkeeper Karen Bardsley made a mess of a dangerous ball from Ashley Lawrence into the area at the 42nd minute. The keeper spilled it right to the foot of Canada’s most likely hero, Sinclair, who took two touches before quickly slotting the ball in to cut the deficit to 2-1 just before the teams headed to their dressing rooms at halftime.

The second half started with a goalkeeping change for England within six minutes from restart. Bardsley seemed to experience a problem with her right eye following a Canada free kick. Medical staff called for a change and Bardsley was substituted for Siobhan Chamberlain. 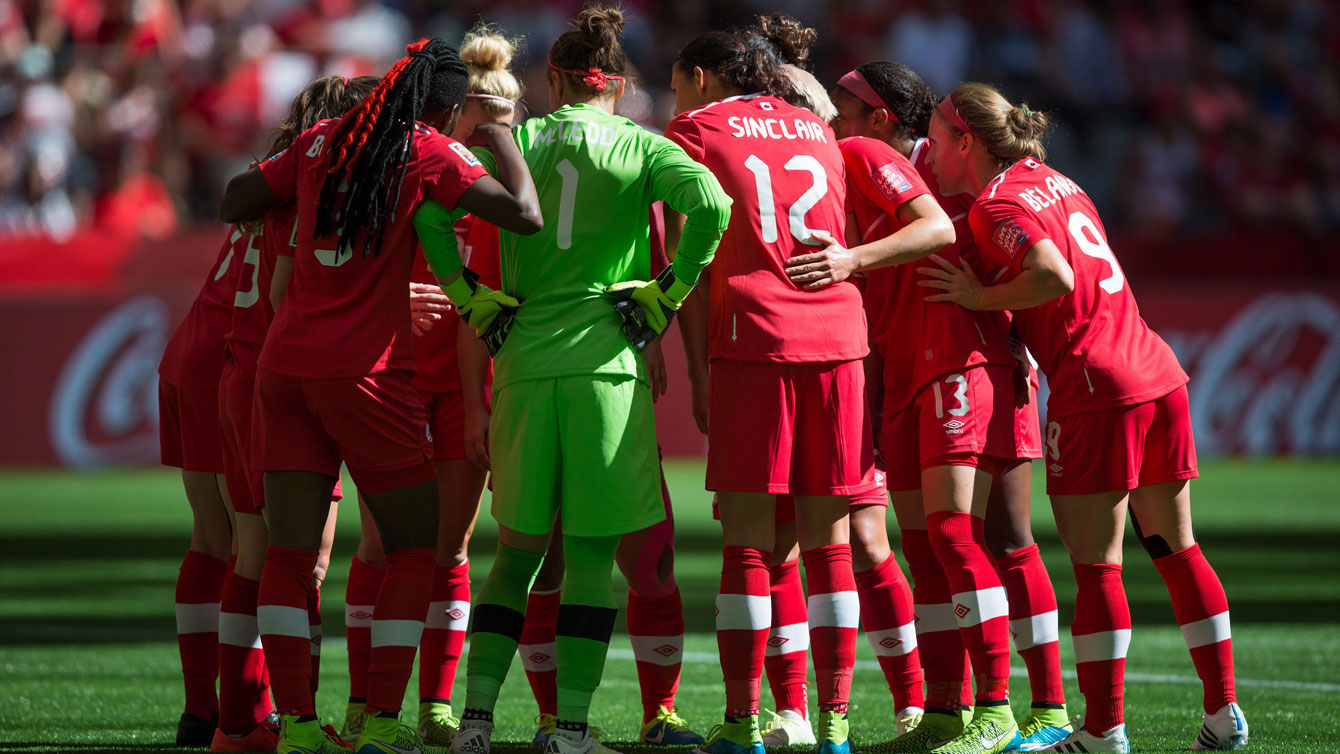 Christine Sinclair assembles the team after Canada went down 2-0 to England at the FIFA Women’s World Cup quarterfinals on June 27, 2015.

At the 55th minute, England moved up the pitch with numbers. Taylor placed a shot from the right side of the box before McLeod ranged to her left to get a hand on the ball that was surely on its way to the inside of the far post for a third England goal.

A tough day for Tancredi continued just past the hour mark, when an England defensive error allowed her a good look at goal, though the player chose to make a pass that was quickly absorbed by a pair of scrambling English legs.

It was about that time Canada introduced Diana Matheson’s pace to the match. The player battled back from a pair of serious injuries over the last year to be fit for some portion of the World Cup. 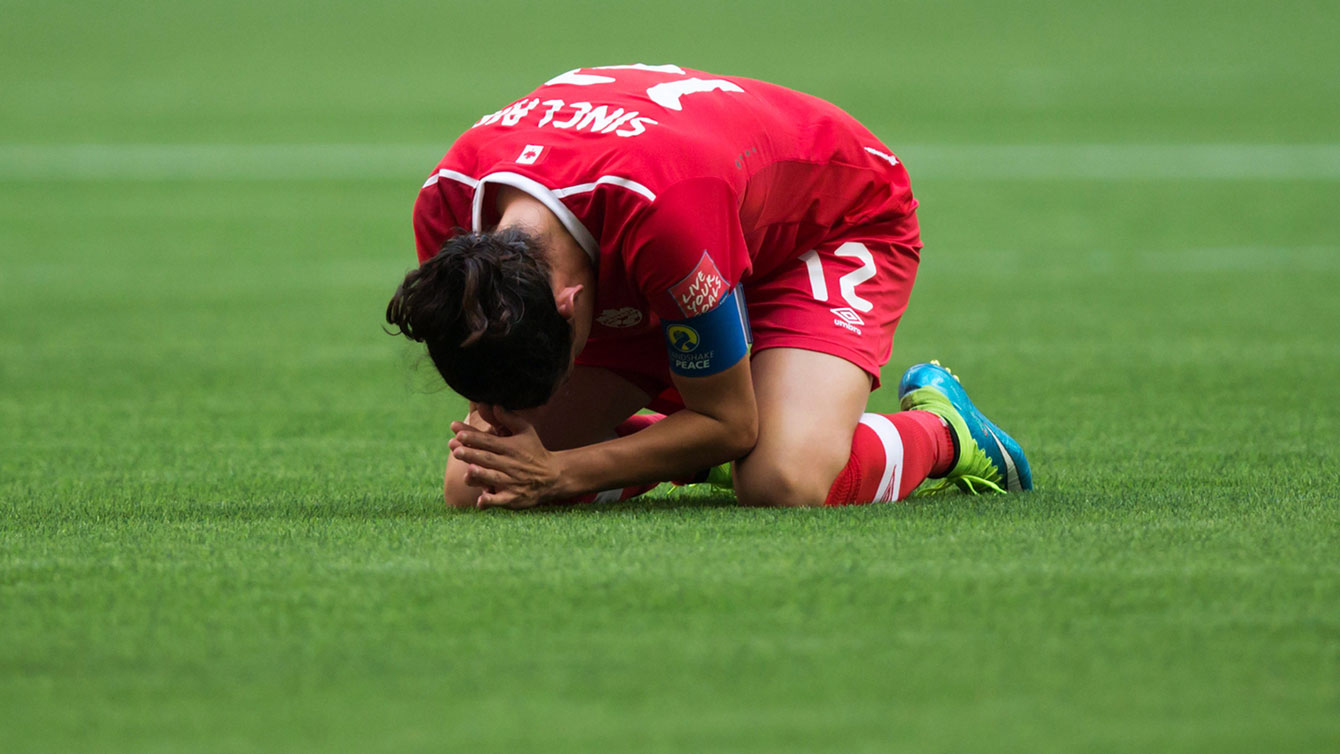 A dejected Christine Sinclair goes to ground at the final whistle as Canada loses 2-0 to England at the FIFA Women’s World Cup on June 27, 2015.

Matheson injected energy on the right side of attack, while another substitute, Adriana Leon replaced Tancredi on the left, from where she placed a near-perfect cross to the middle of the box for Sophie Schmidt at the 83rd minute. Schmidt got her left foot to the ball but it sailed over the target.

A corner at the last minute of regulation gave Canada another chance at goal. Schmidt delivered the ball and found Sinclair, her header though couldn’t redirect the ball’s momentum to test Chamberlain.

Five minutes of stoppage time didn’t provide any clear chances for Canada as England seemed content to frustrate the locals. The final whistle sent Canada out of its first FIFA Women’s World Cup at home, while England advanced to the semifinals to face defending champion Japan.