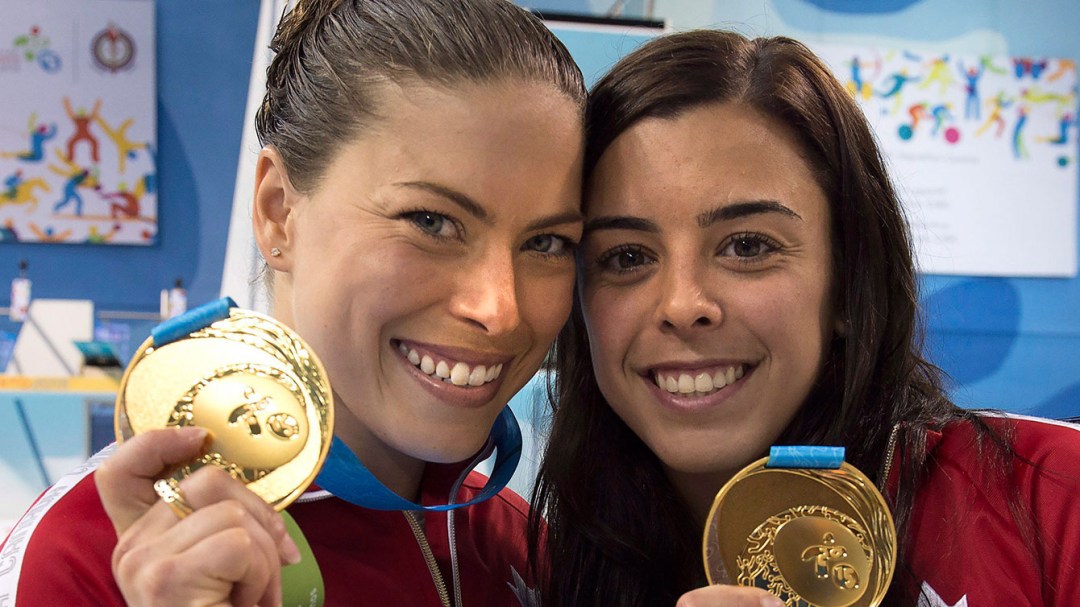 They’re great friends and now Pan Am medallists together.

Philippe Gagné and Vincent Riendeau delighted a deafening Canadian crowd and scored 404.34 points for the silver medal, helping the home team go four-for-four in synchro diving on Monday (other Canadian results below). Cuba won their first medal with a golden 439.14 points and Colombia was third with a score of 403.23. 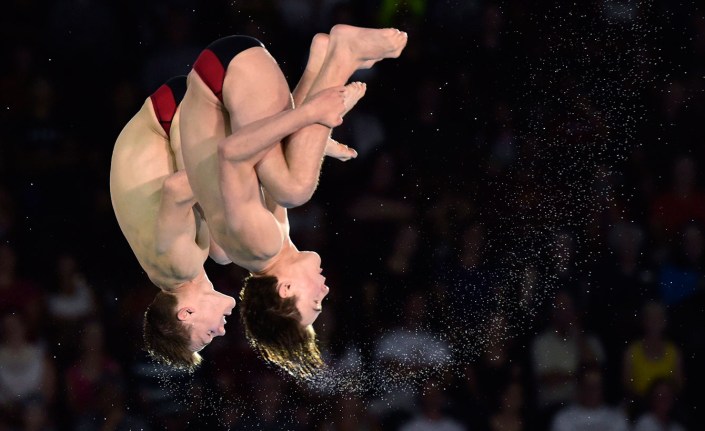 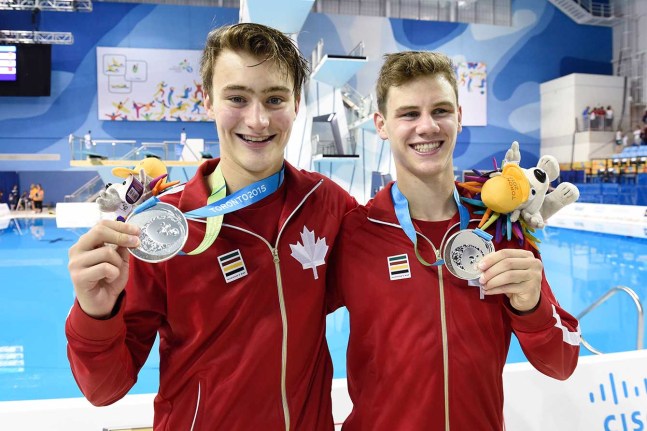 Philippe Gagné (left) and Vincent Riendeau after receiving their medals for the men’s synchro 10m platform at TO2015.

They have been diving together since they were eight years old, “We’re always together, we’re always joking, it’s amazing to be diving next to him,” said 18-year-old Riendeau about his 17-year-old buddy. They are the youngest two on the Canadian diving team. But they have shown composure here in Toronto.

Gagné leaves TO2015 as the most-decorated Canadian diver with a bronze in 3m springboard and silvers in both synchro events. He has taken a great step here toward a senior career, “It was an evolution from junior to senior diving and now that I know that I’m able to perform internationally,” he said, “My confidence for sure is sky rocketing right now.”

How does synchro diving work?

The divers complete the same dive at the same time, only feet from each other. It’s very nice to watch. The team is judged for their individual dives and how well they synchronize.

US divers Deidre Freeman and Maren Taylor were third.

Abel and Ware were 1-2 in the individual event and dove a tight competition against the Mexicans. After four rounds the Canadians had only a 2.07 point lead. Espinosa, who won bronze in 10m synchro earlier on Monday, and Hernandez simply performed better when they needed to, scoring 301.20 points. Abel and Ware earned fewer points on their final dive despite having a greater degree of difficulty, finishing at 298.23 and 5.13 points ahead of the Americans. “That dive is really hard so if we do one error it’s over,” said Ware. 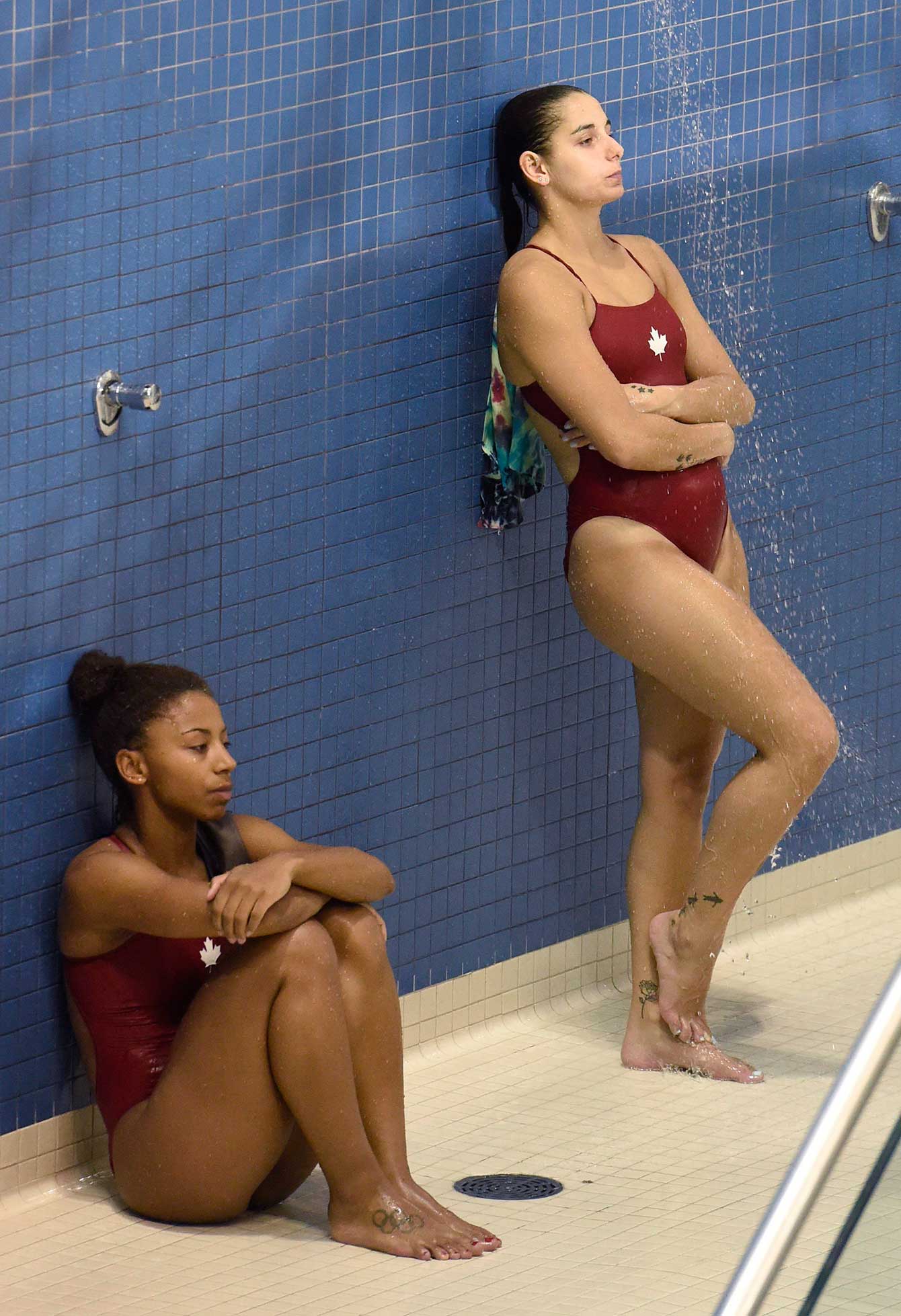 Jennifer Abel (left) and Pamela Ware during Monday’s 3m synchro competition at TO2015.

She is talking about 5154B, what they call the front 2 1/2 and 2 twist in pike position. It sounds hard, and it is. No other team in the world is doing it. If it pays off, they’ll earn huge points; it just didn’t turn out tonight. It was Abel admitting her take-off wasn’t ideal.

The Canadians won synchro medals together at five of the six stops on the elite World Series tour. They finished the season ranked second to the Chinese, partly because they did the entire tour, for the first time. Mexico was ranked fourth.

Mexico’s Jahir Ocampo and individual winner Rommel Pacheco were the strong favourites, and won with 438.27 points. The Canadians scored 413.37 points, ahead of Cory Bowersox and Zachary Nees of the United States (385.38). 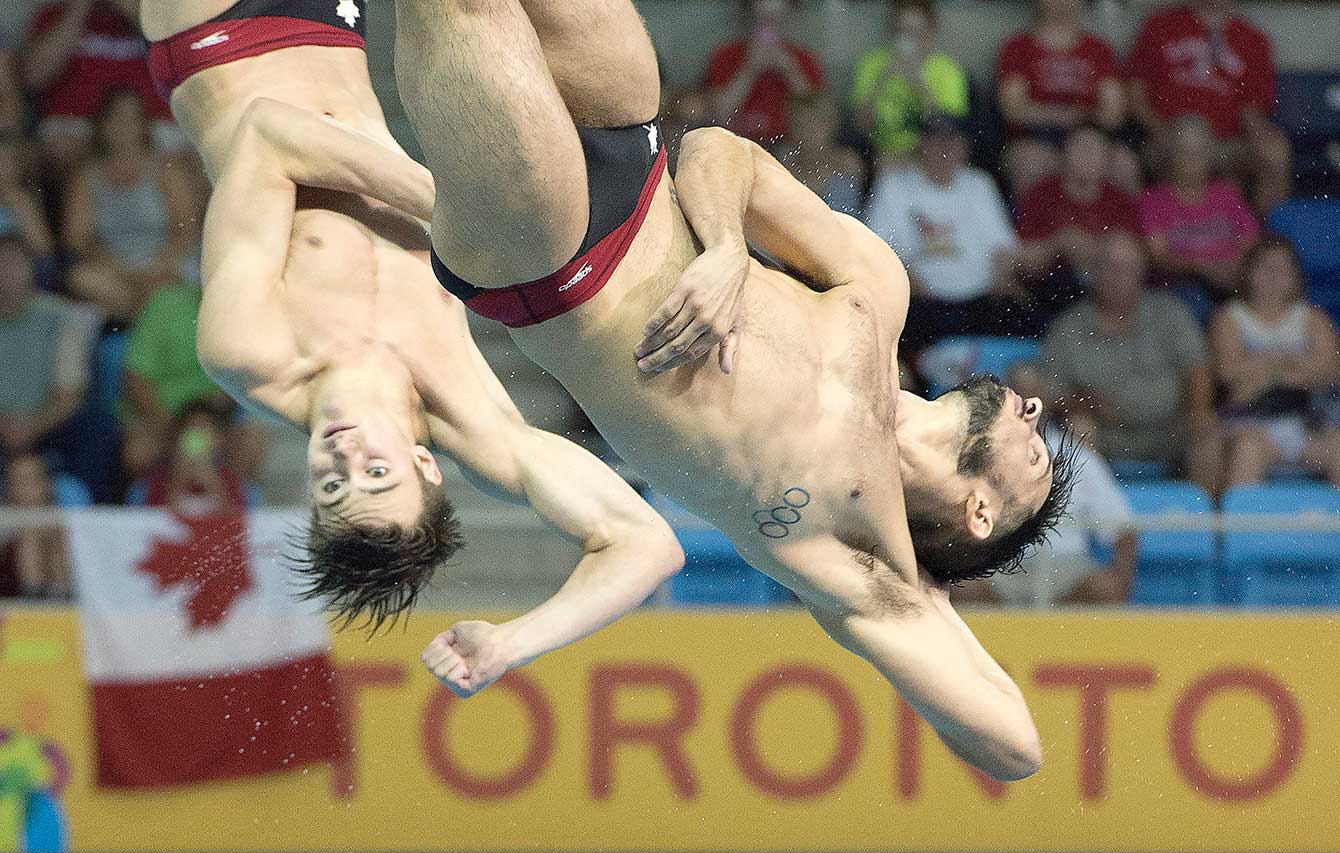 Philippe Gagné (left) and François Imbeau-Dulac compete in the men’s 3m synchro at Pan Am Games.

It is the second Pan Am medal for Gagné who was third on individual springboard. Imbeau-Dulac needed to bounce back from a disappointing sixth, “In synchro I have fun,” said Imbeau-Dulac comparing his performances, “Philippe and I are just joking around all competition and individual I’m in my own bubble, I don’t enjoy it anymore,” reflected the 24-year-old London Olympian who has admitted to struggling for two years now.

It’s been a chance for Gagné to emerge as Canada’s next great male diver, stealing a sliver of spotlight from the powerhouse ‘FAB IV’ women’s team (more below). “My confidence is really high right now,” said Gagné who will team up with another young diver, 18-year-old Vincent Riendeau for 10m synchro platform later on Monday. 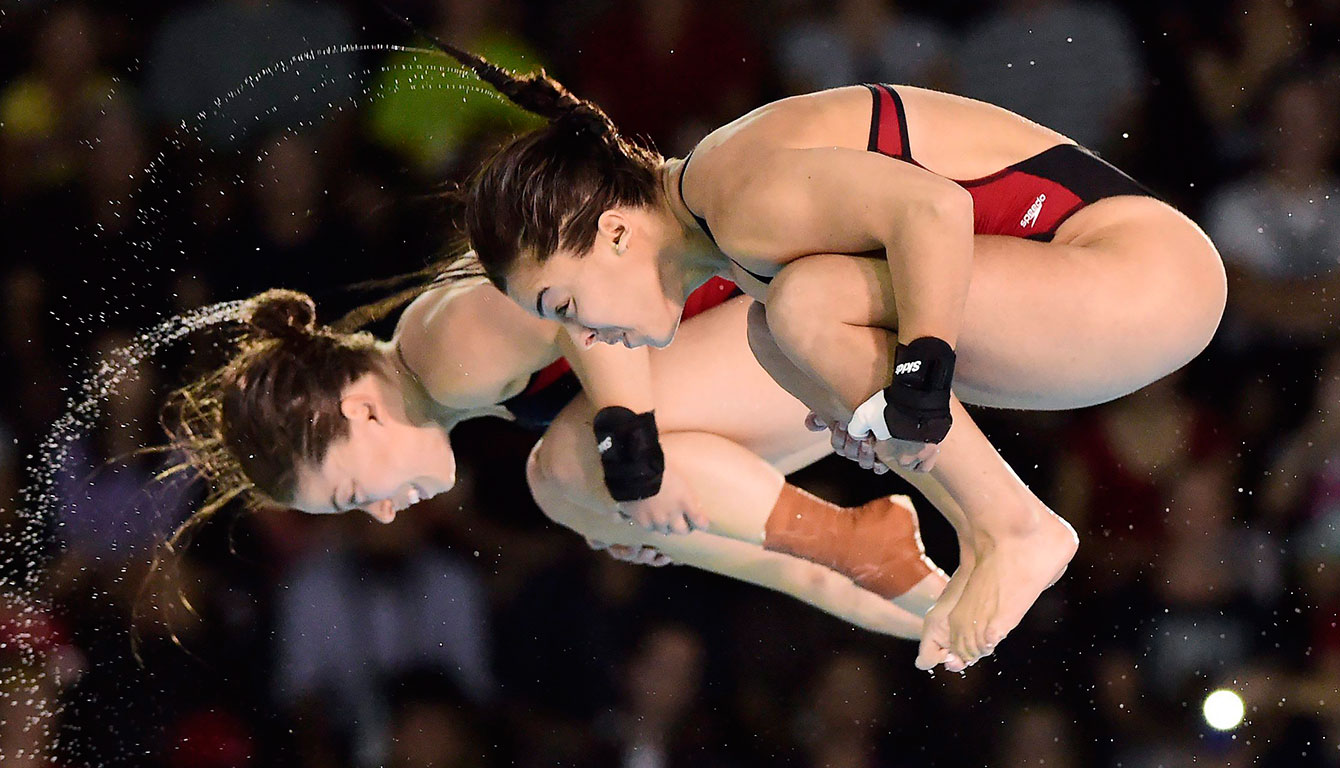 The Canadians earned 316.89 points, ahead of Ingrid de Oliveira and Giovanna Pedroso of Brazil with 291.36 points. Mexican platform Pan Am champ Paola Espinosa and her partner Alejandra Orozco were third.

“The event didn’t go as planned,” admitted Benfeito, “We made mistakes, happy to come out with gold, the crowd really helped us,” she said. 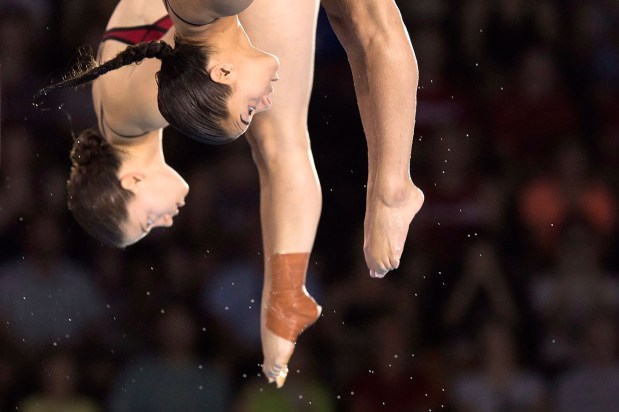 Roseline Filion (l) and Meaghan Benfeito compete in the 10m synchro platform final at TO2015. 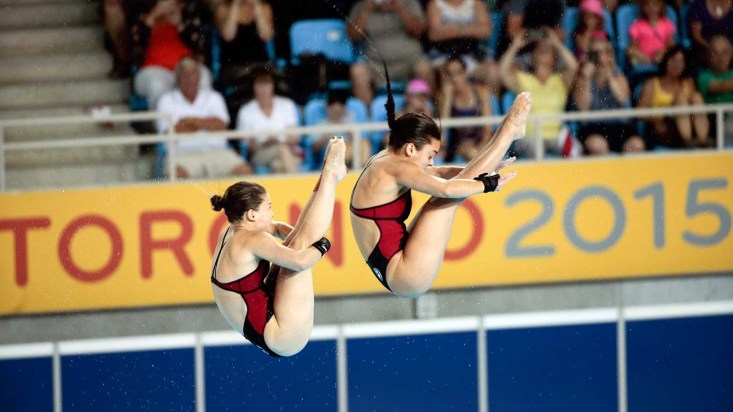 Roseline Filion (l) and Meaghan Benfeito compete in the 10m synchro platform final at TO2015.

Periscope Q & A with Benfeito and Filion

A fourth dive miss by the Mexicans opened up an opportunity but Benfeito and Filion wouldn’t hit their back 3 1/2 somersault, allowing Brazil’s sneaking Ingrid de Oliveira and Giovanna Pedroso to jump ahead after round four. 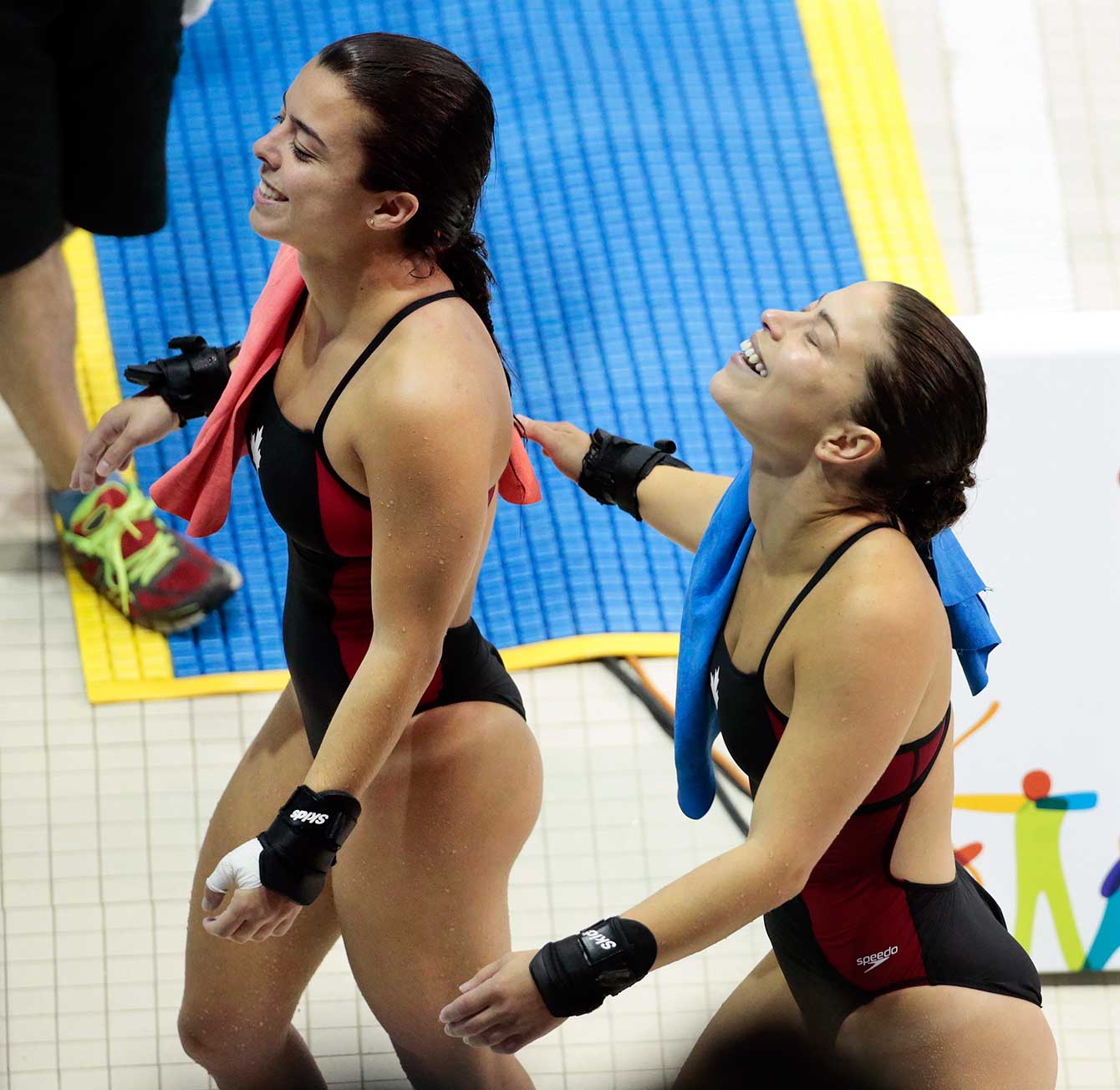 The Canadians put it away with a solid back 2 1/2 somersault 1 1/2 twist in the final round. “Our last dive is our last dive because it’s good,” said Benfeito who will now move on with Filion to FINA World Aquatic Championships, beginning at the end of July.

“A lot of pressure going into our last dive, we told ourselves ‘stop playing around, it’s time to do a good one'” – Roseline Filion

The medal is both Filion and Benfeito’s second of Pan Ams, adding to individual silver and bronze respectively from Saturday. 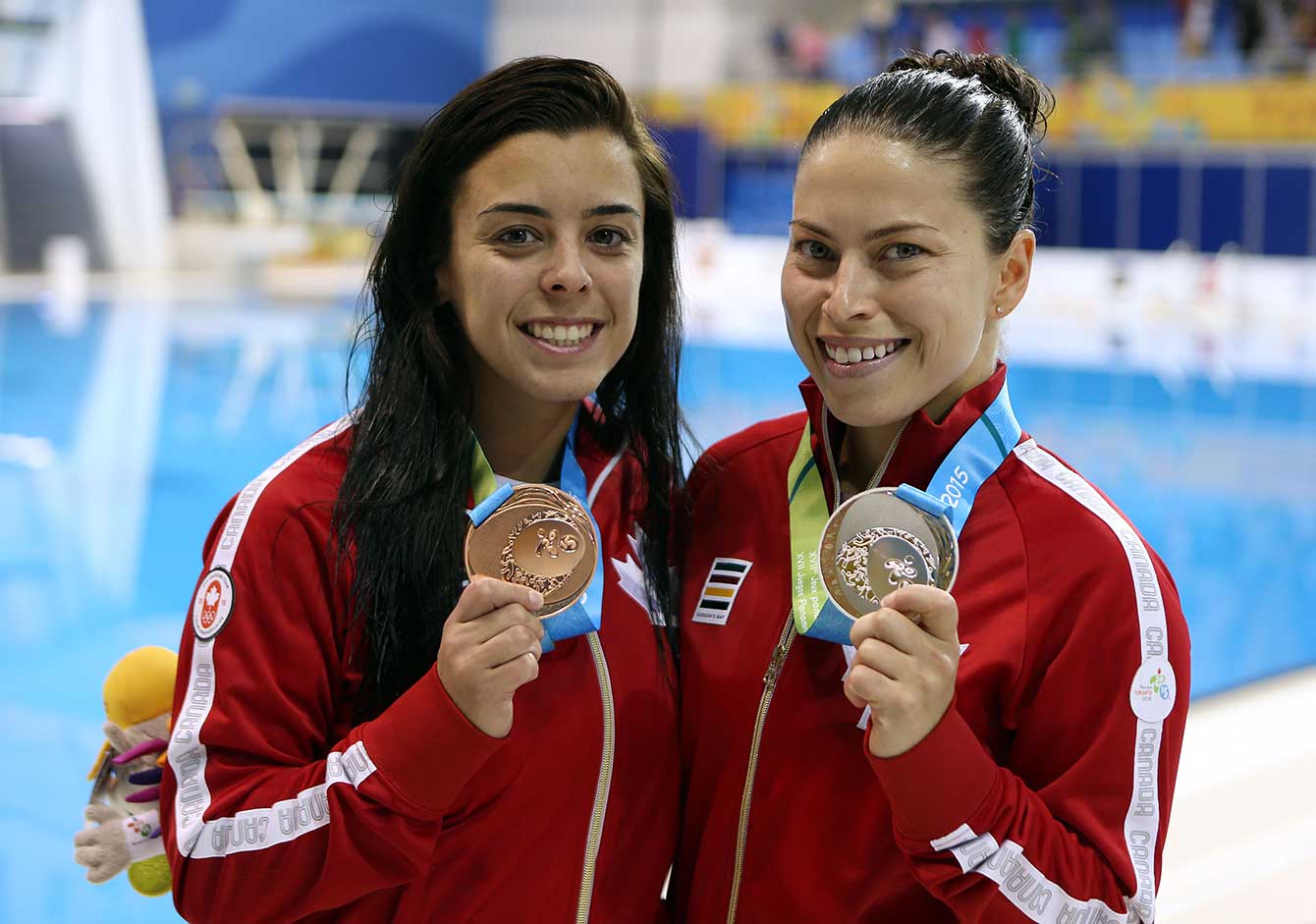