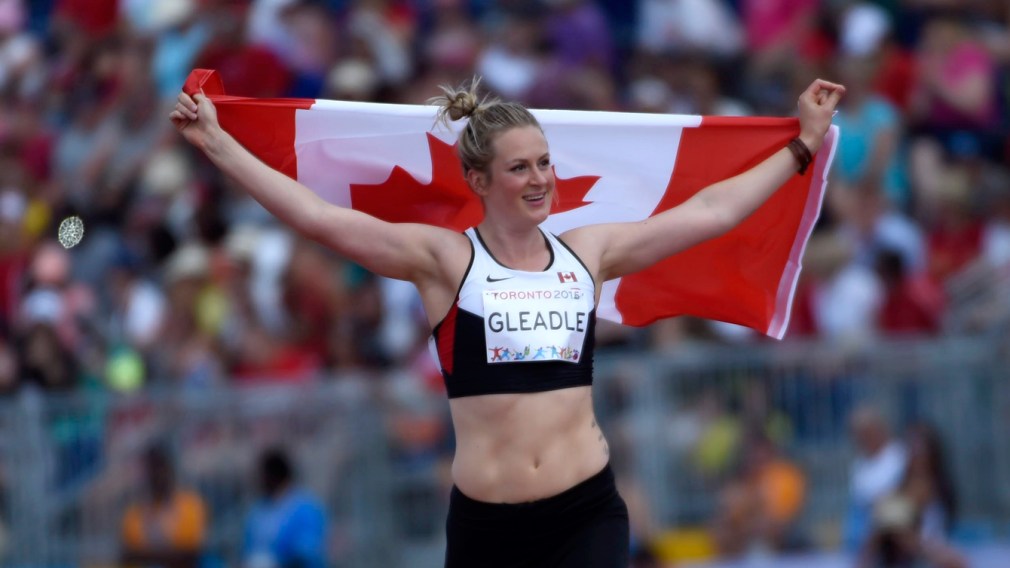 Canada’s first gold on the Pan Am Games track came on Tuesday morning courtesy of a huge clutch throw from Liz Gleadle in women’s javelin, then Shawn Barber pole vaulted his way to the top of the podium.

In the evening Tim Nedow and Sultana Frizell also found the podium winning silver and bronze respectively in their events.

While Barber was hitting his stride on the opposite side of the infield on Tuesday morning, Gleadle brought the crowd to its feet launching for 62.83 metres to beat U.S. record holder Kara Winger, who had thrown for 61.44m minutes earlier. Juciline de Lima of Brazil took the bronze medal. 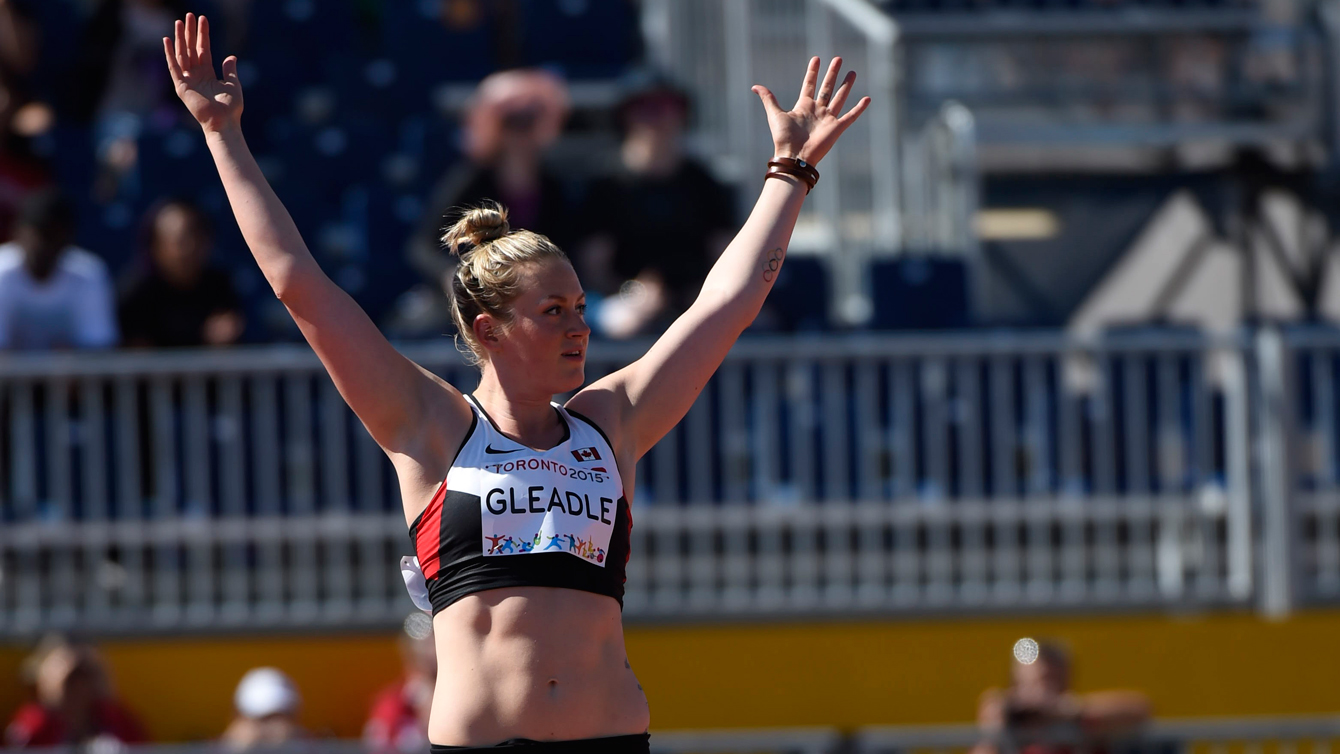 Liz Gleadle at the Pan Am Games javelin competition on July 21, 2015.

“It’s a big deal!” said Gleadle of being the first Canadian to hit the podium at York. “I was getting a little bit nervous towards the end. The wind was really picking up. It was definitely not a perfect condition day. But I saw the Brazilian do it and I saw Kara do it and I wanted to stand on the podium and hear the Canadian anthem. I thought that would sound a lot better.”

Gleadle had held the lead early, throwing 59.33 metres on the first of her six attempts. That mark held up until de Lima’s fourth attempt which flew 60.42m. After Winger surpassed de Lima with her final throw, Gleadle was sitting in third place before she stepped to the line for that all-important sixth throw. 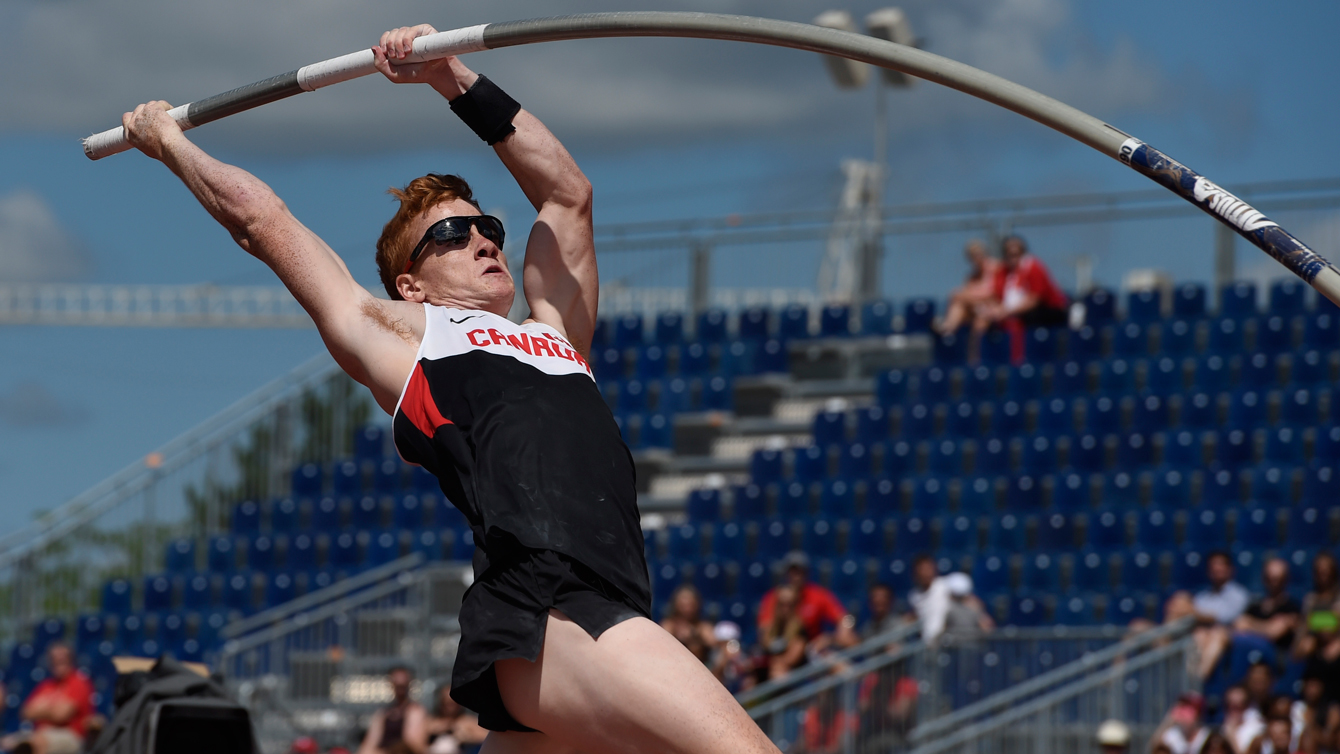 Shawn Barber vaults his way to Pan Am Games gold in Toronto on July 21, 2015.

Just after noon, Shawnacy Barber won gold in the men’s pole vault with a height of 5.80 metres, tying the Pan Am record set four years ago in Guadalajara. Guaranteed the victory over Argentina’s German Chiaraviglio, who had missed all three of his attempts at 5.85m after succeeding at 5.75m, Barber missed three shots at 5.93 metres which would have surpassed his own national record of 5.91m set earlier this spring.

“It was definitely on my mind today,” said Barber of his drive for a gold medal. ‘I just went out there and tried to continue my good year and I think I did that very well today by winning gold.” 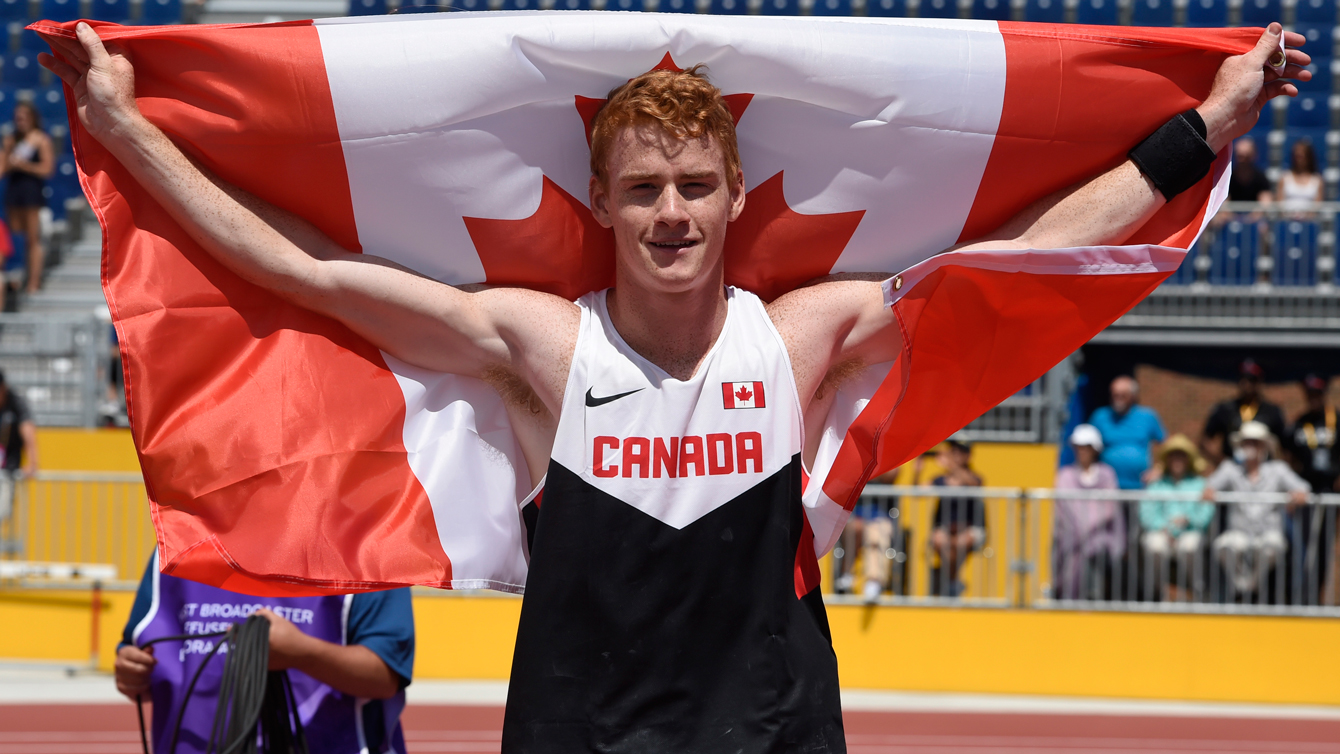 He added: “It’s great being able to perform in front of your home crowd. To have fans, your family and friends cheering you on is something special.”

The field exploits continued on Tuesday evening with Nedow winning silver against a strong field in men’s shot put.

Heavyweight O’Dayne Richards broke the Pan Am Games record (held by Canadian Olympic medallist Dylan Armstrong) with a 21.69m put. Nedow then had a brilliant fifth attempt of 20.53m (a season’s best), that placed him behind the Jamaican, beating strong competitors like German Lauro (Argentina), who took bronze, and Americans Darrell Hill and Jonathan Jones who were kept off the podium.

A fourth field medal arrived from Frizell in women’s hammer throw. Frizell’s 69.51 was good for a bronze behind Rosa Rodriguez of Venezuela (71.61) and Amber Campbell of USA (71.22).

Gleadle, Barber win Canada’s first field event gold medals at TO2015
Ana Padurariu: Facing the never-ending challenges of 2020
What is the difference between racquetball and squash?
Shuttlecock and balls: The fastest moving objects in sport
Team Canada Athletes Out of Isolation, Back to Training
Getting vertical: The highest jumps in sport