The Pan American Games 100-metre finals – for women and men – will take place on Wednesday night in what is expected to be a long sold out crowd at the Pan Am Athletics Stadium in York University.

The semifinals will get started at 6:25 p.m. ET with two heats from women. Then the men will follow with back-to-back semifinal races. That order among genders will repeat at 8:30 with the women’s final first, followed 20 minutes later by the men. At the end of those races, the Americas will have its sprint queen & king. 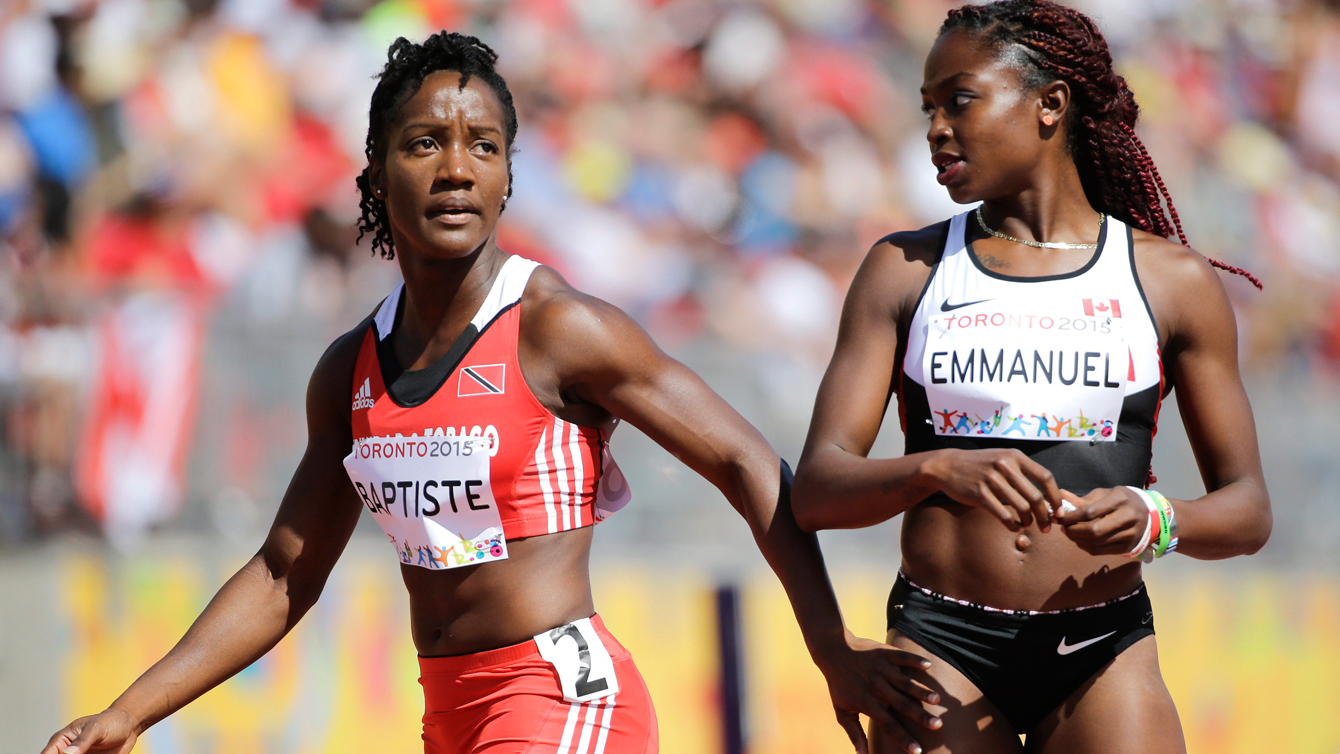 Kelly Ann Baptiste (left) looks at the scoreboard after heats, next to Canada’s Crystal Emmanuel, who also advanced to the Pan Am Games 100m semifinals on July 21, 2015.

She’s from Scarborough, but unfortunately not the one in Toronto. A 28-year old Tobago-born sprinter, Baptiste is a 2011 World Championship bronze medallist in the 100m, and has a personal best of 10.83 from 2013. 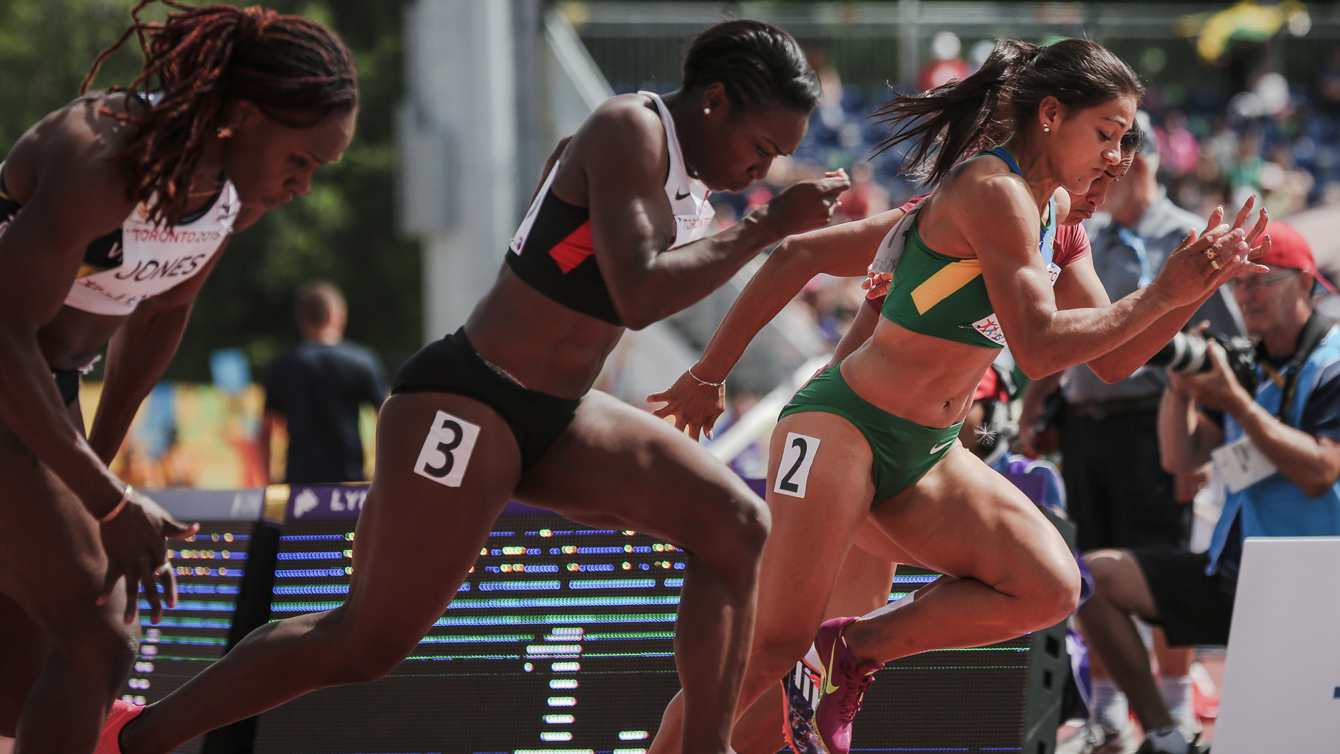 With designs on becoming a top female sprinter on the international stage for Canada, Bingham, 21, has recently set a new personal best of 11.18 at the national championships. She ran 11.00 in heats, but with a generous wind reading of 4.0 metres per second at breezy York U. 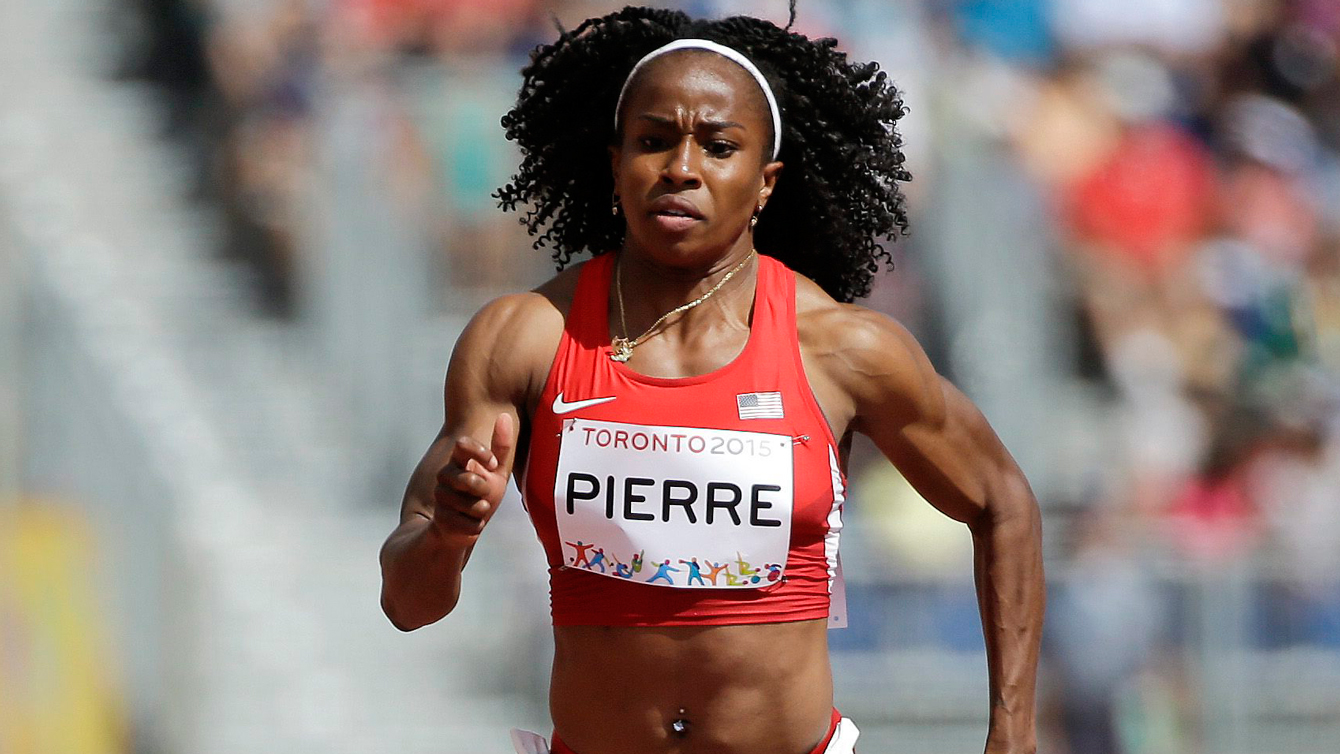 The favourite to win the women’s sprint title, Pierre already set the Pan Am Games record in heats at a wind-legal 10.92. The 28-year-old is the returning Pan Am Games silver medallist in the 100m. 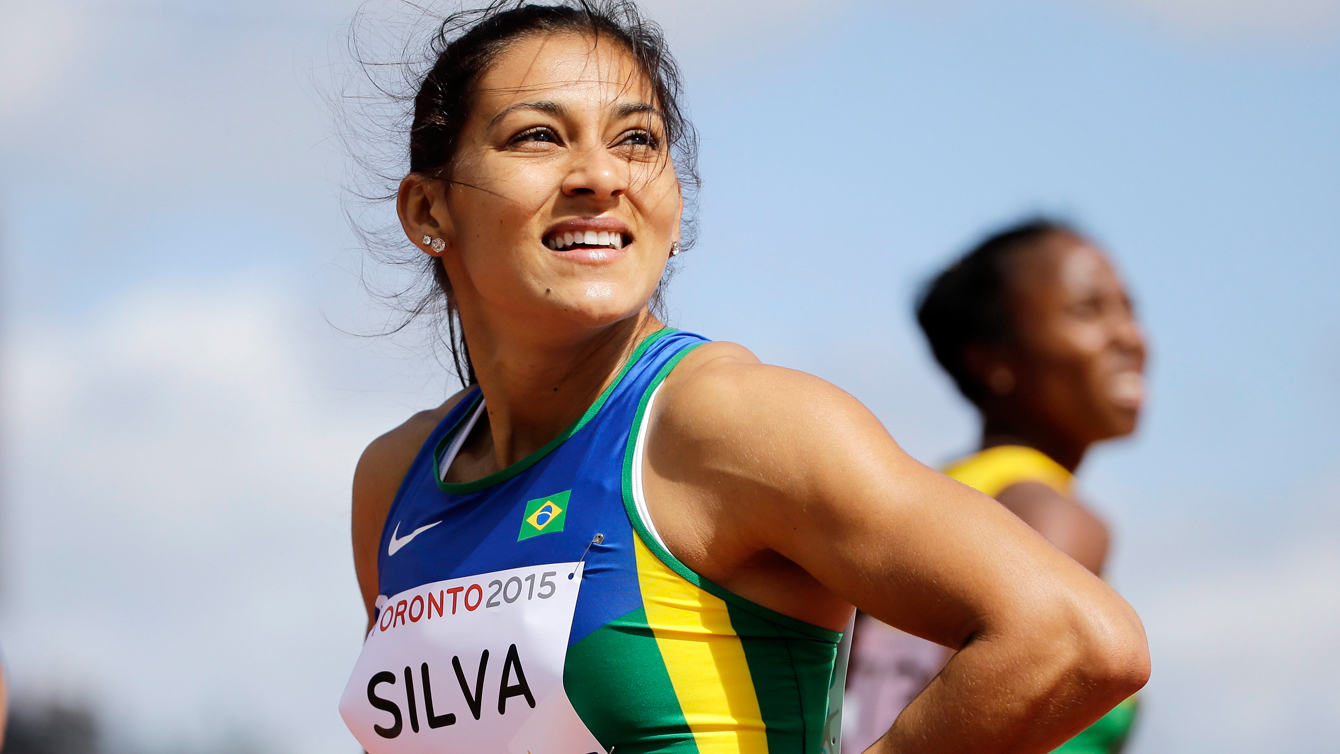 Silva has explosive closing speed and won the heat that featured Canada’s Bingham. The 26-year-old Brazilian was a member of the 4x100m gold medal-winning Pan Am Games team from Guadalajara 2011. 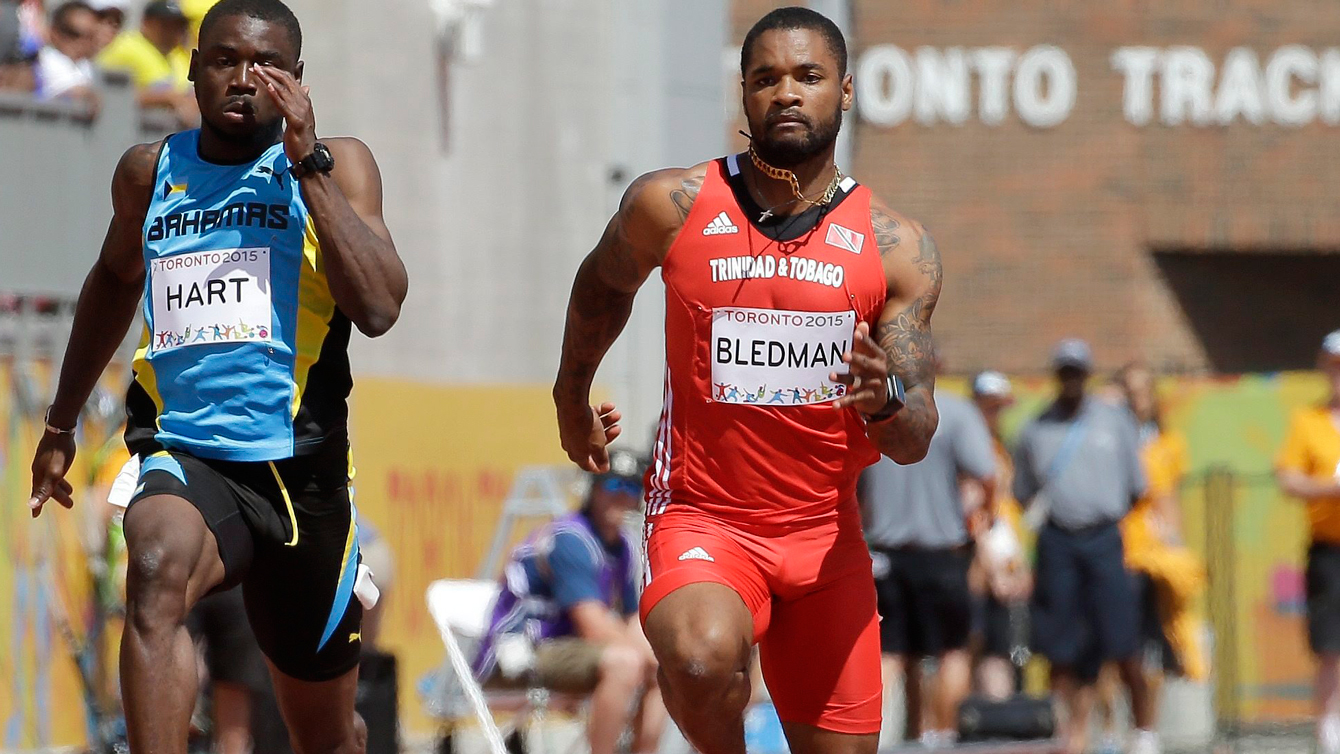 Keston Bledman (right) sprints away during Pan Am Games heats in Toronto on July 21, 2015.

A 9.86 runner cased inside a powerful frame, 27-year old Bledman is strong, confident, a two-time Olympic silver medallist in relays, and must be considered as the most experienced challenger for the men’s sprint title at Toronto 2015. 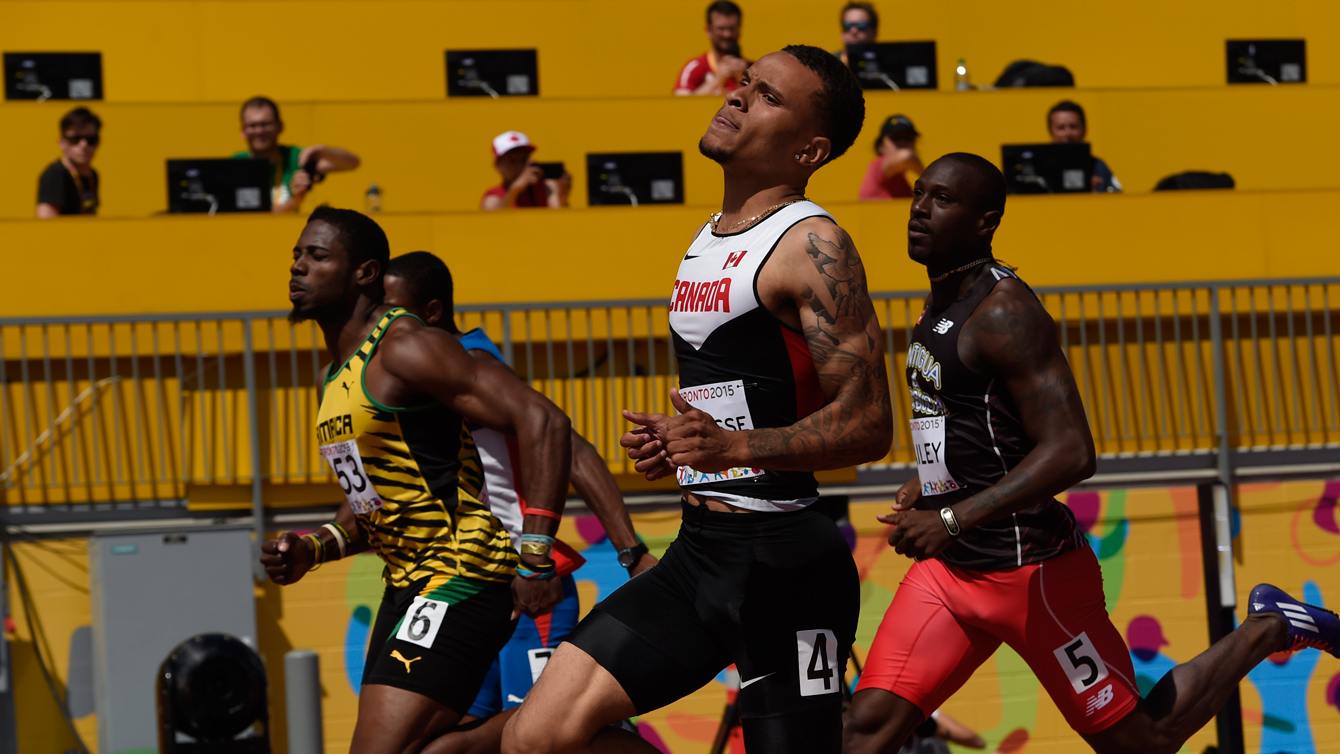 Andre De Grasse flies through the heats at the Pan Am Games on July 21, 2015 in Toronto.

The resume is still thin for De Grasse but the early offerings are spectacular. The 20-year old from Markham (not far from the Pan Am Games track), completed a 100m/200m double in U.S. collegiate championships in June, considered as one of the greatest all-conditions sprinting feats ever. Humble and focused, De Grasse will want to better his 9.95 personal best and perhaps, if fate (read: wind reading) allows, shatter the Canadian record by running under 9.84. 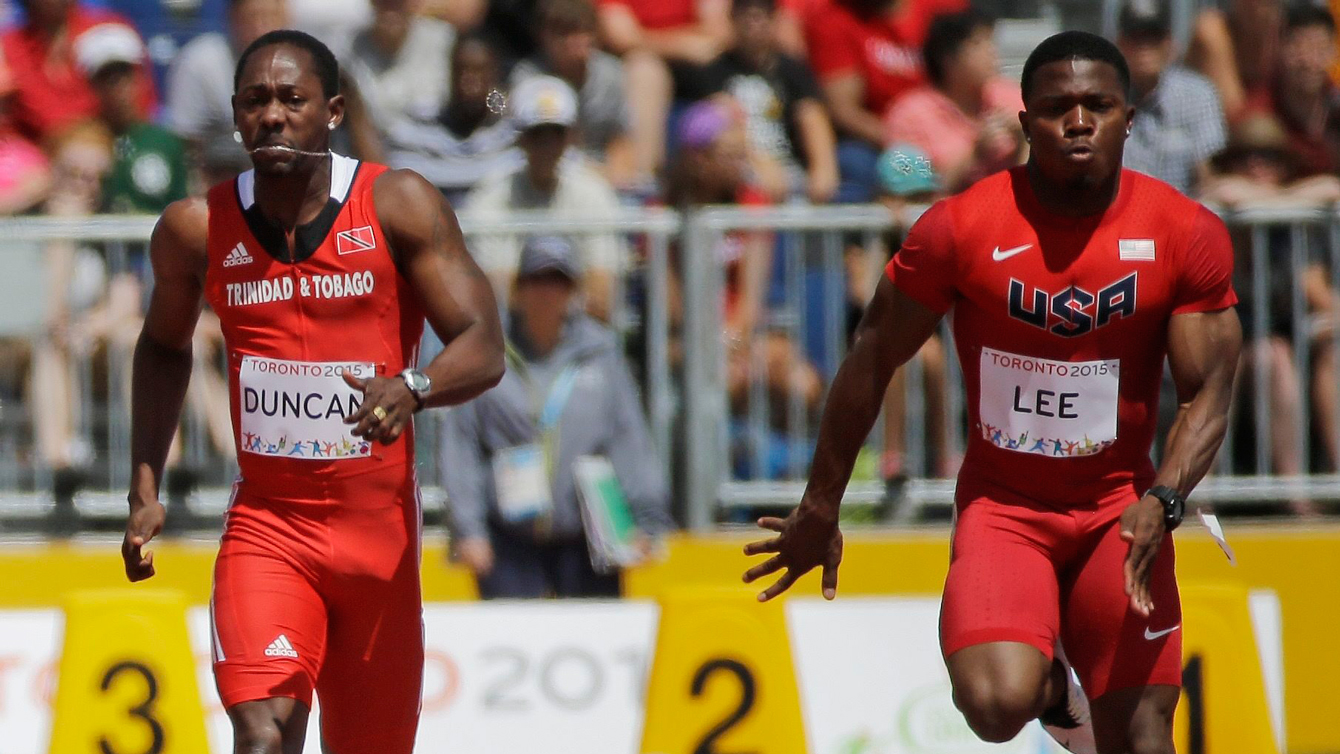 De Grasse’s teammate at University of Southern California, Lee will need a big day to overcome the Canadian at home and Bledman. The 22-year-old American will likely need to go faster than his 9.99 personal best for gold, depending on the conditions. 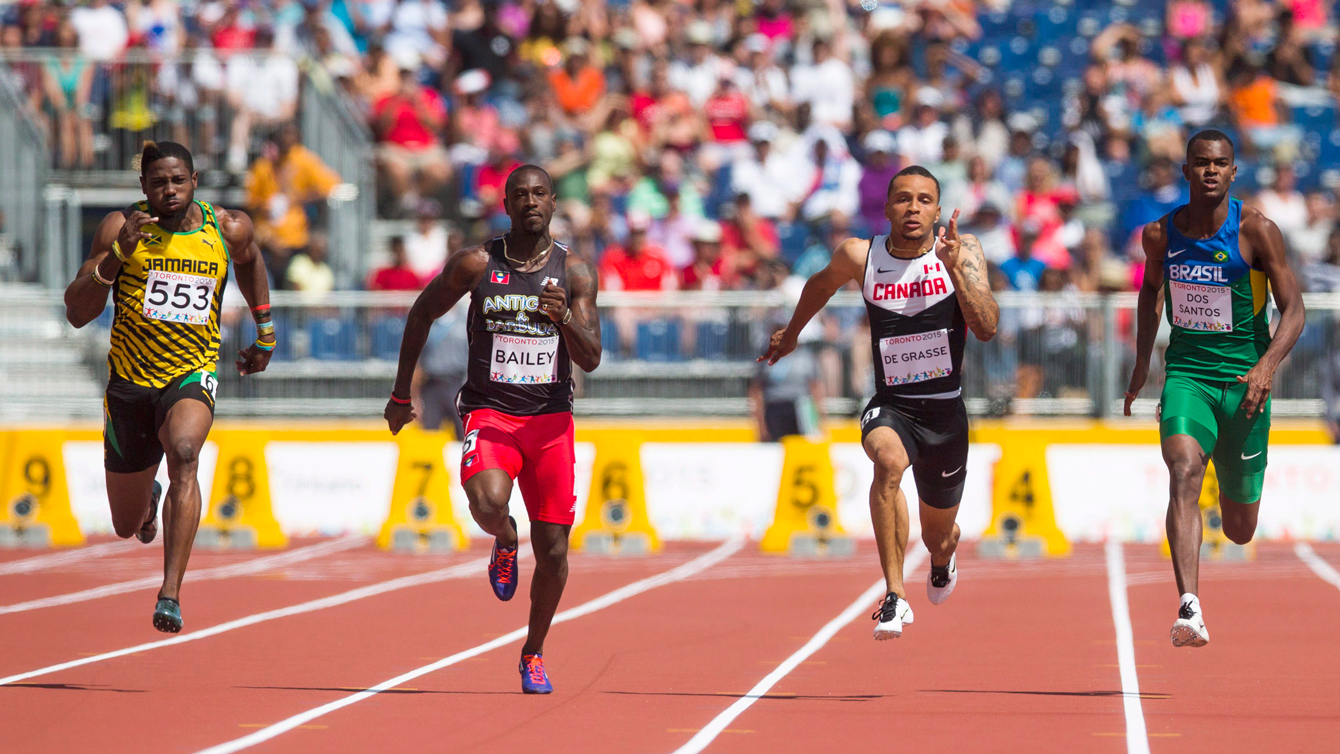 Jason Livermore (left) competes in the 100m quarterfinals at Pan Am Games on July 21, 2015 against Andre De Grasse (second from right).

This space could just as easily have been reserved for Remontay McClain of the United States. However, 27-year-old Livermore is a veteran and a strong 200m runner. A bit of endurance could play to his advantage with two races in as many hours on Wednesday night. Livermore’s personal best in the 100m is 10.05.

The wind can be erratic in the north of Toronto where the TO2015 athletics track is located. Fans shouldn’t get too excited if they see a monstrous record time on the scoreboard without also checking the wind reading. The wind assistance must be 2.0 metres per second or under for big times to hit the record books.