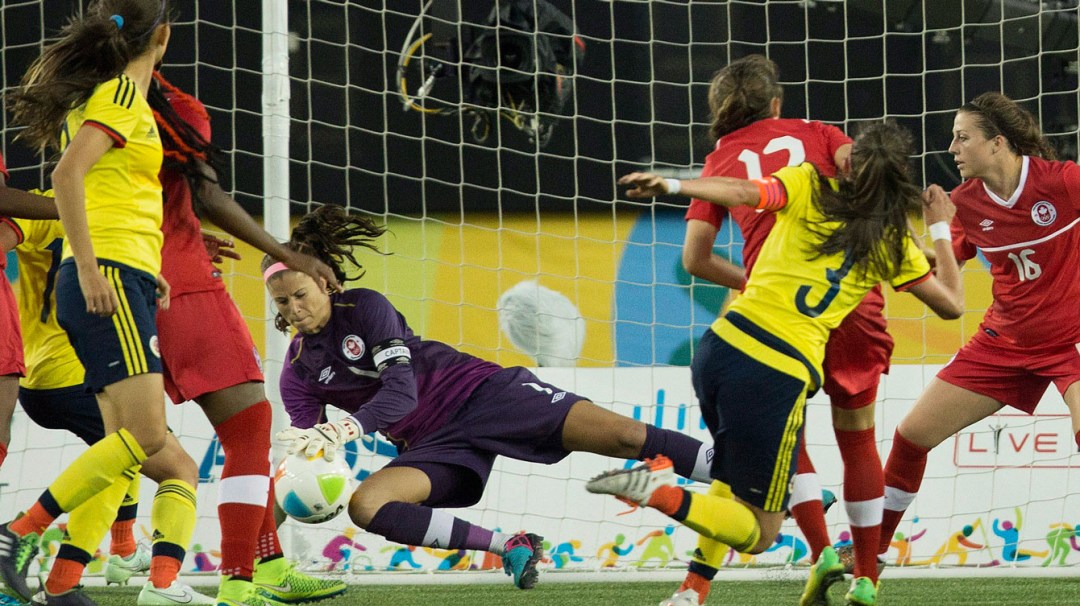 It was heartbreak on home turf on Wednesday, as Canada fell 1-0 to Colombia in the women’s soccer semifinals at the Pan American Games.

Despite being the reigning Pan Am champions, Canada came in as slight underdogs against a Colombian team full of players fresh off the team’s exciting run to the Round of 16 at the FIFA Women’s World Cup. Canada, meanwhile, was fielding a developmental squad at TO2015, with just four players from its World Cup roster.

Even so, the Canadians put out an attack-minded starting lineup, with 16-year-old striker Gabrielle Carle getting the start alongside fellow forwards Janine Beckie, 20, and Marie Levasseur, 18. 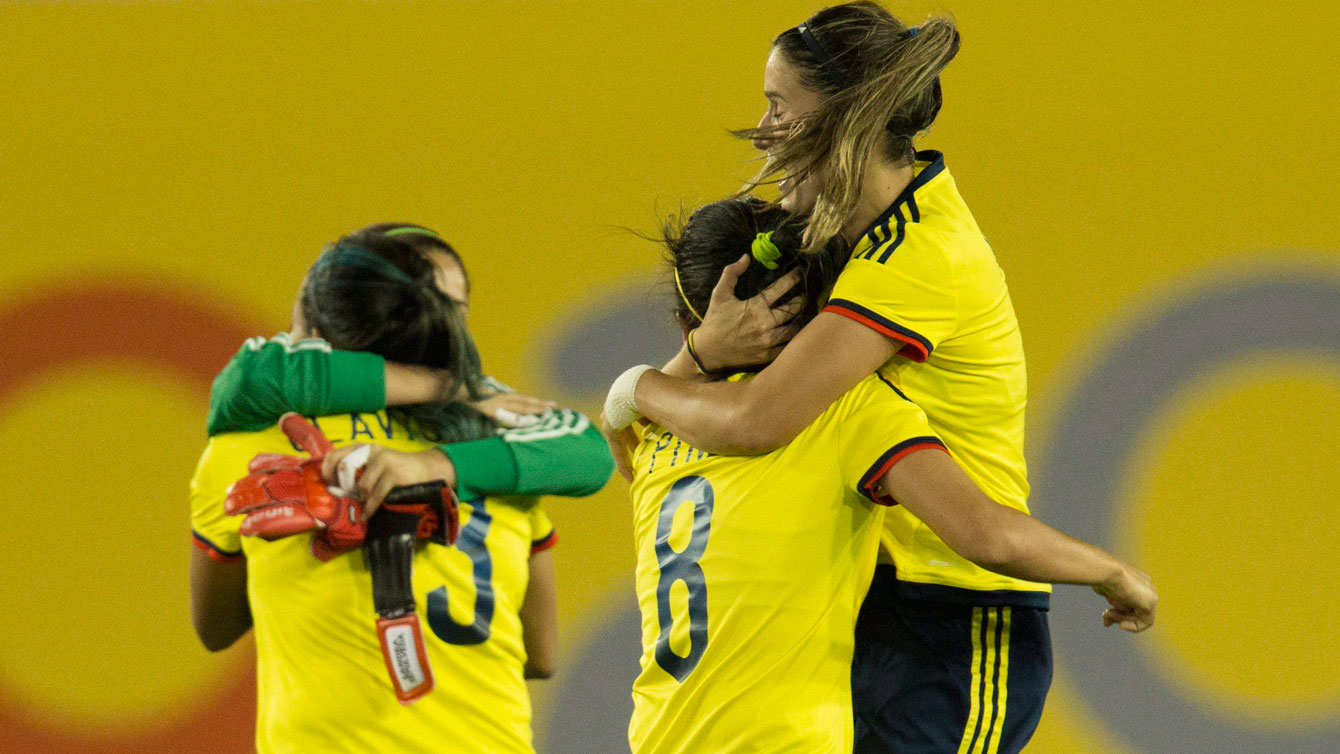 Colombia players celebrate scoring against Canada in semifinals of the Pan Am Games football tourney on July 22, 2015.

It was the Colombians, however, who came out with the attacking spark, buoyed by a large contingent of support in Hamilton. Two early free kicks tested the Canadian defence, while goalkeeper Stephanie Labbé was forced to make a diving save off a 23rd-minute corner kick.

Canada had two golden opportunities of its own shortly thereafter. Some great buildup play gave midfielder Sarah Kinzner with an open shot from 15 yards out, but she put her shot high; then, a minute later, midfielder Emma Fletcher (who’d come on as an early substitute for Levasseur, believed to be injured) had a one-on-one with Colombia goalkeeper Sandra Sepulveda, but Sepulveda made the save.

The visitors then punished the hosts in the 29th minute, when midfielder Diana Ospina got a one-on-one of her own, and slotted the ball through Labbé’s legs to open the scoring. 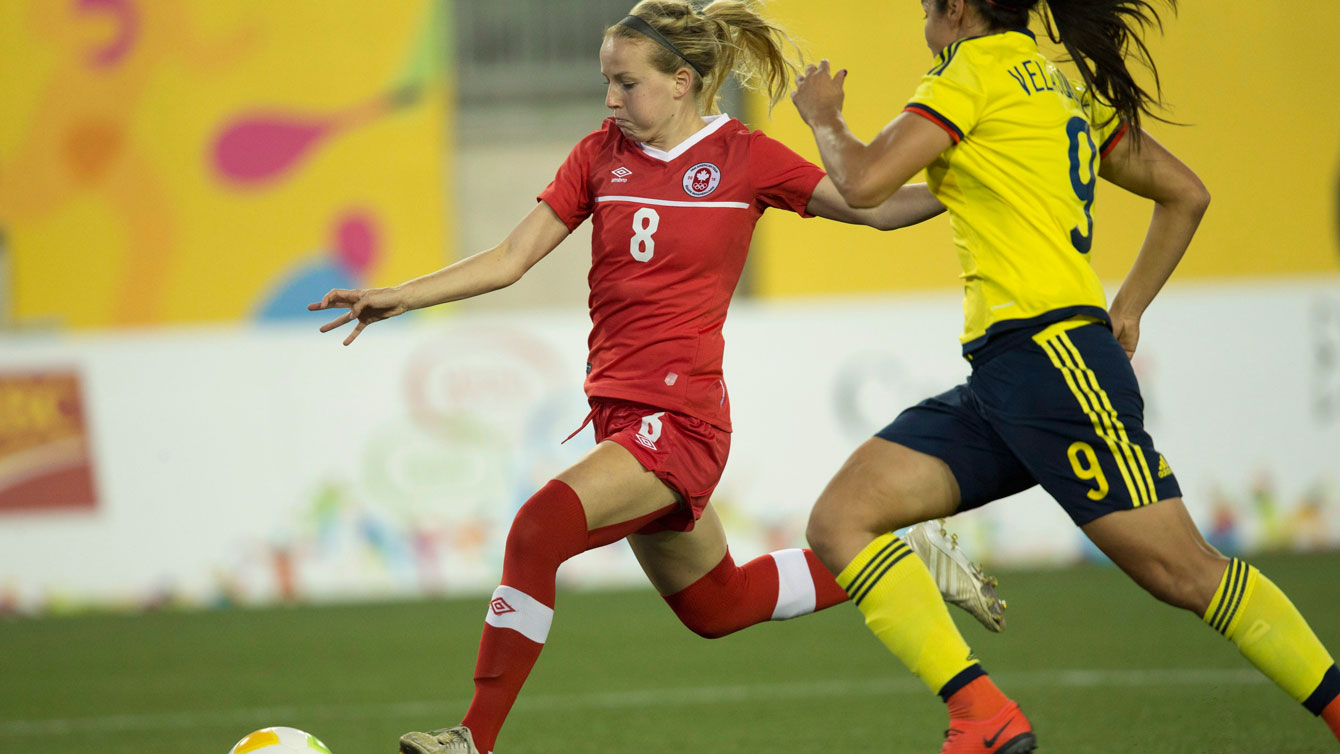 Emma Fletcher (in red, 8) dribbles before shooting against Colombia in Pan Am Games football on July 22, 2013.

In need of an equalizer, Canada surged in the second half, but despite long spells of possession, were unable to truly test Sepulveda in the Colombia goal. With Canada pushing forward, Colombia nearly struck on the counterattack in the 69th minute, when substitute Marie Usme launched a 35-yard shot that looped over Labbé’s head but not inside the goalposts.

Beckie had perhaps Canada’s best chance in the 72nd minute, when she steamed up the right wing and cracked a low shot that just missed the mark. The Canadians threw everything they had at the South Americans in a desperate final 20 minutes, but couldn’t find the crucial final touch to earn themselves an equalizer.

Canada, however, still has a shot at a Pan Am medal, as the young squad will face off against Mexico in the third-place match on Friday. Colombia, meanwhile, heads into Saturday’s gold-medal match against Brazil, who won 4-2 in Wednesday’s other semifinal matchup.