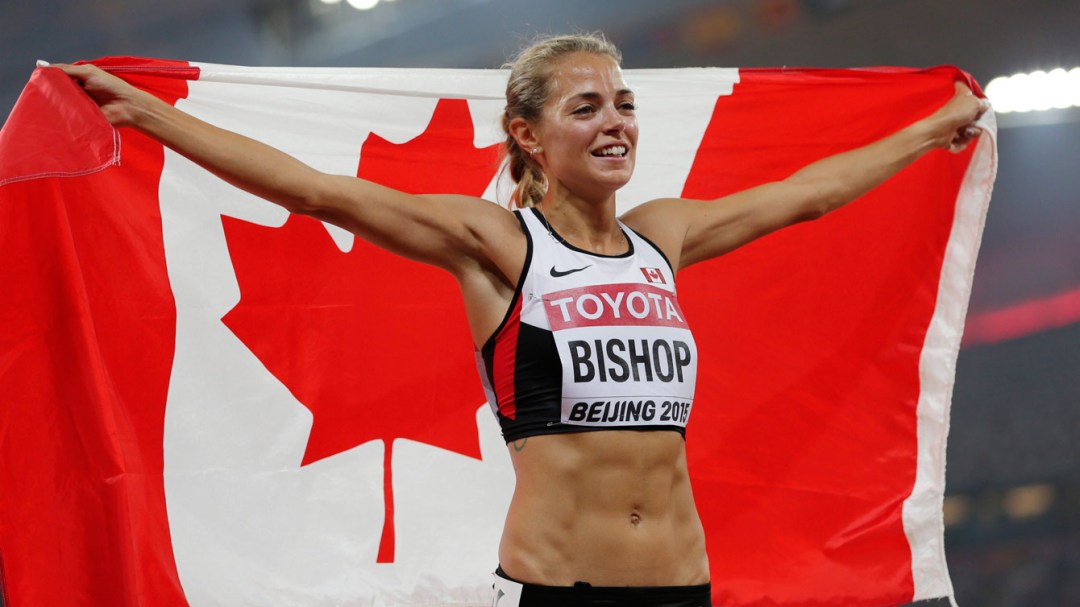 After two tremendous runs leading to the final, Melissa Bishop showed she had something left in the tank, winning a world championship silver medal in the women’s 800 metres on Saturday.

Bishop had set a national record of 1:57.52 in the semifinals to take the fastest time into the final at the IAAF World Championships in Athletics in Beijing. The Canadian stayed on the inside lane and kicked in the last 150 metres – a move that has become her trademark at big meets this year – to register the second place finish in the final at 1:58.12. 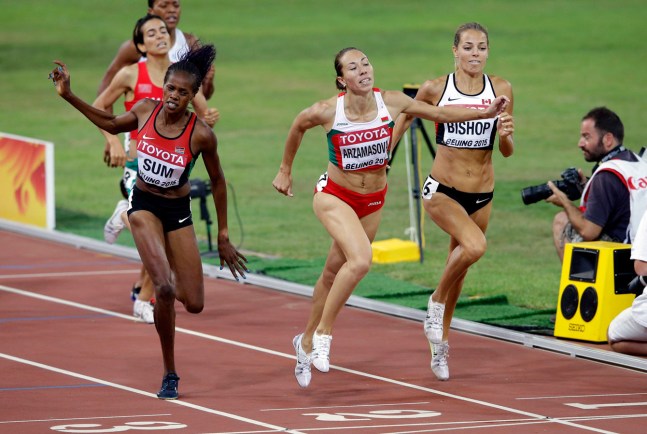 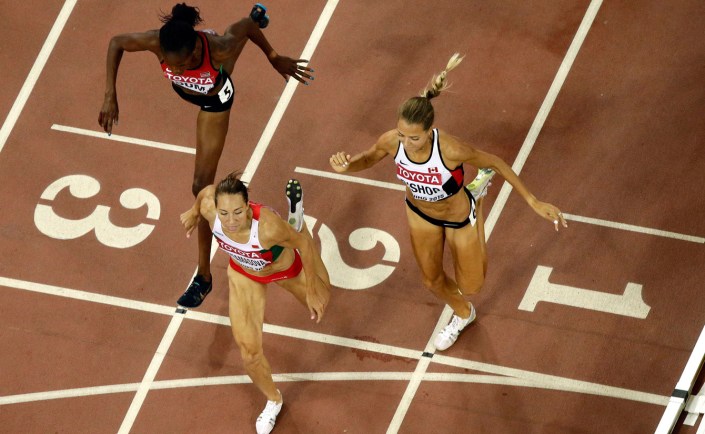 Marina Arzamasova (1:58.03) of Belarus took gold and Kenya’s Eunice Sum (1:58.18) won bronze in the final, where a three-way sprint saw the medallist finish with 0.15 seconds of each other.

“This is really a good world championships for myself and my team,” Bishop said, “I am excited.”

Before setting the national record, Bishop ran 2:00.23 in the heats earlier in the week to book her place in the semifinals. Her consistency this summer also awarded Bishop a Pan Am Games gold medal. 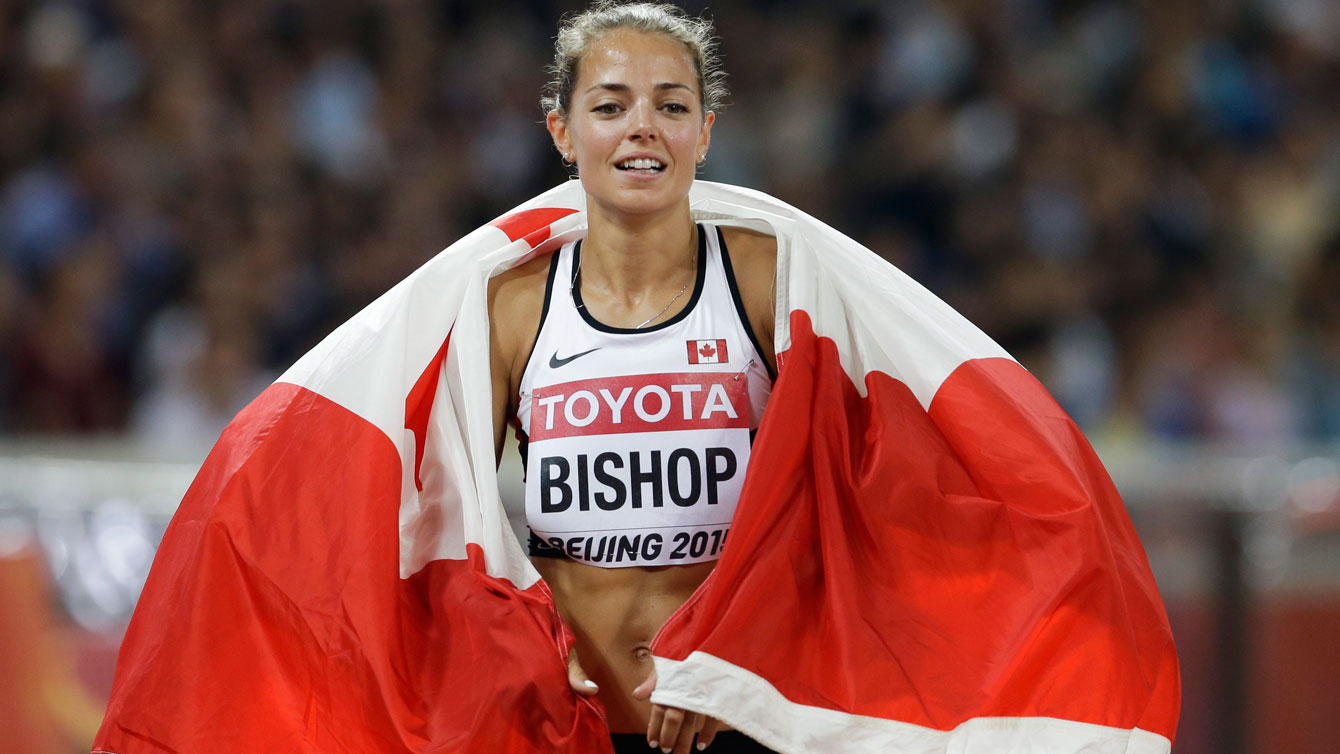 Melissa Bishop celebrates with the flag after winning 800m silver at the world championships in Beijing on August 29, 2015.

“The race was slow on the first 400m. I stayed relaxed and composed because anything can happen on the last round.”

The pace of the first lap, with the first runner crossing the 400m mark in just over 59 seconds, played to Bishop’s advantage as she has a stronger kick than most competitors at close. Until Bishop, no Canadian woman had ever won a world championship medal in the 800m and the only male athlete to do it was Gary Reed – who also won a silver – in Osaka 2007. 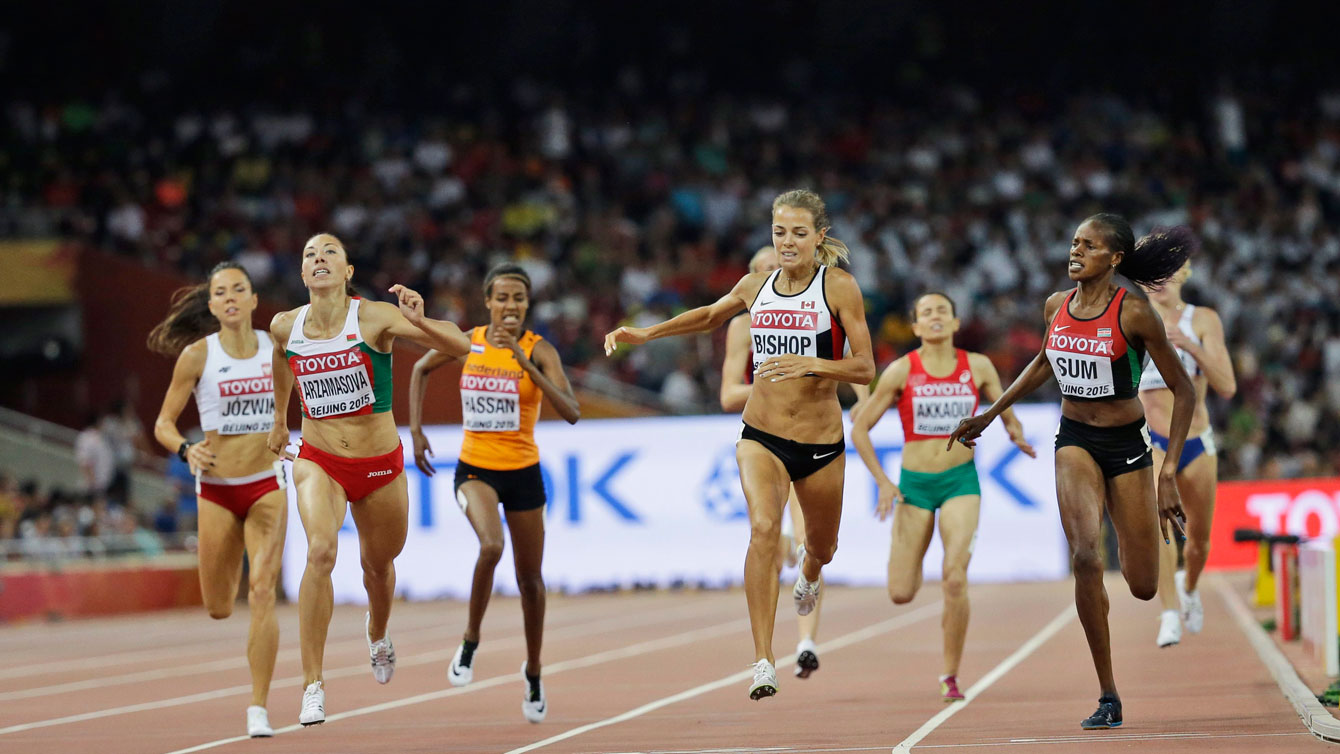 Melissa Bishop edges ahead of her competitors at the IAAF World Championships in Athletics 800m semifinals on August 27, 2015 in Beijing, China.

“Then the pace picked up after 400m and on the finish line I was not able to win this race. It is what it is and I am very pleased with the result.”

Bishop’s was the fifth medal for Athletics Canada at Beijing 2015, tying its world championships record set at the previous meet in Moscow two years ago. Canada went on to win two more medals (silver in decathlon and bronze in men’s 4x100m relay) to shatter the mark on Saturday. Bishop can relate to new standards.

“I set a new Canadian record (Thursday night) and came back tonight with a silver medal. Our training has really been consistent through the last year.”

Leya Buchanan made her IAAF World Championship debut in 2017, competing in the 100m