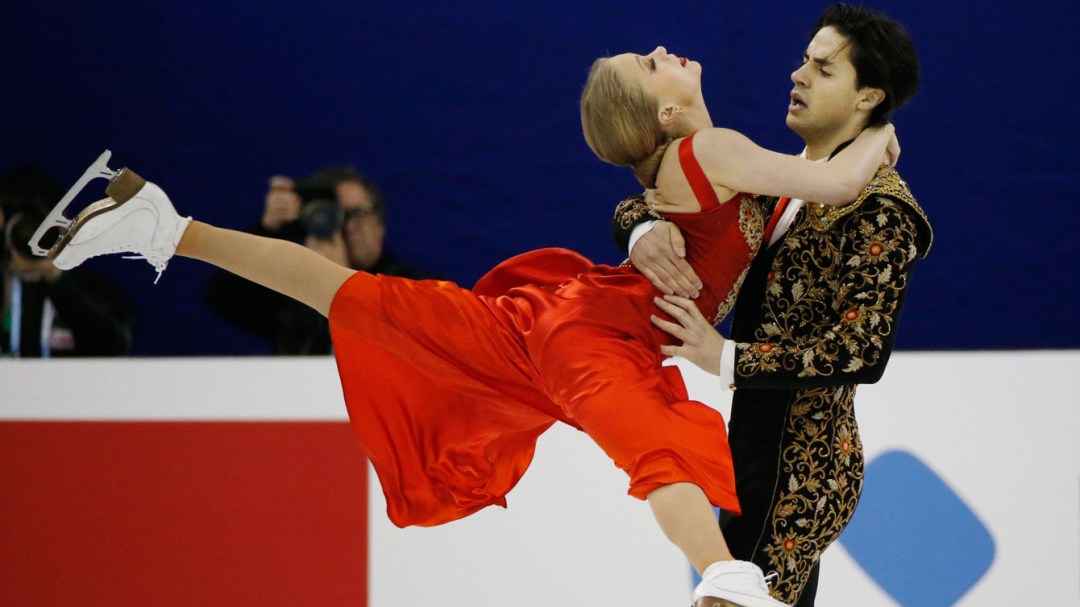 This weekend marks the start of the ISU Grand Prix series – six events featuring the world’s best figure skaters, albeit with the fields organized so that medallists from the 2015 World Championships do not face each other.

On the line: a chance to be one of the six qualifiers in each discipline for the Grand Prix Final in Barcelona in early December.

In case you didn’t know, I’m a little bit excited about the upcoming season. Here is a closer look at the Canadians competing at each of the first three stops: 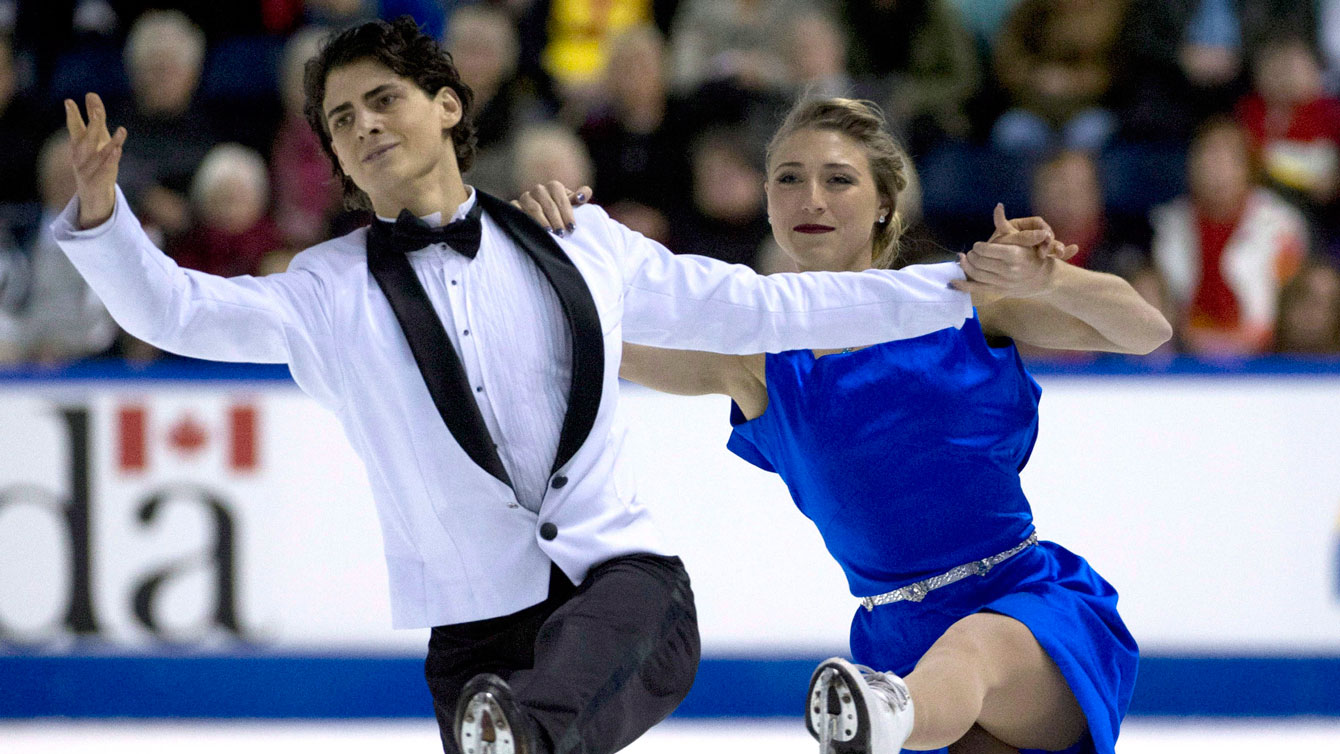 Sixth at last year’s world championships and with their sights set even higher this year, Gilles and Poirier are the second-ranked team in the field behind world silver medallists Madison Chock and Evan Bates of the host United States. The Canadians will surely be boosted by an early season victory at the Ondrej Nepela Trophy.

Chartrand was Canada’s top lady at last year’s world championships with her 11th place finish. But she’s in a tough field that includes world silver medallist Satoko Miyahara of Japan, American Gracie Gold who was fourth at the worlds, and current world junior champion Evgenia Medvedeva of Russia. 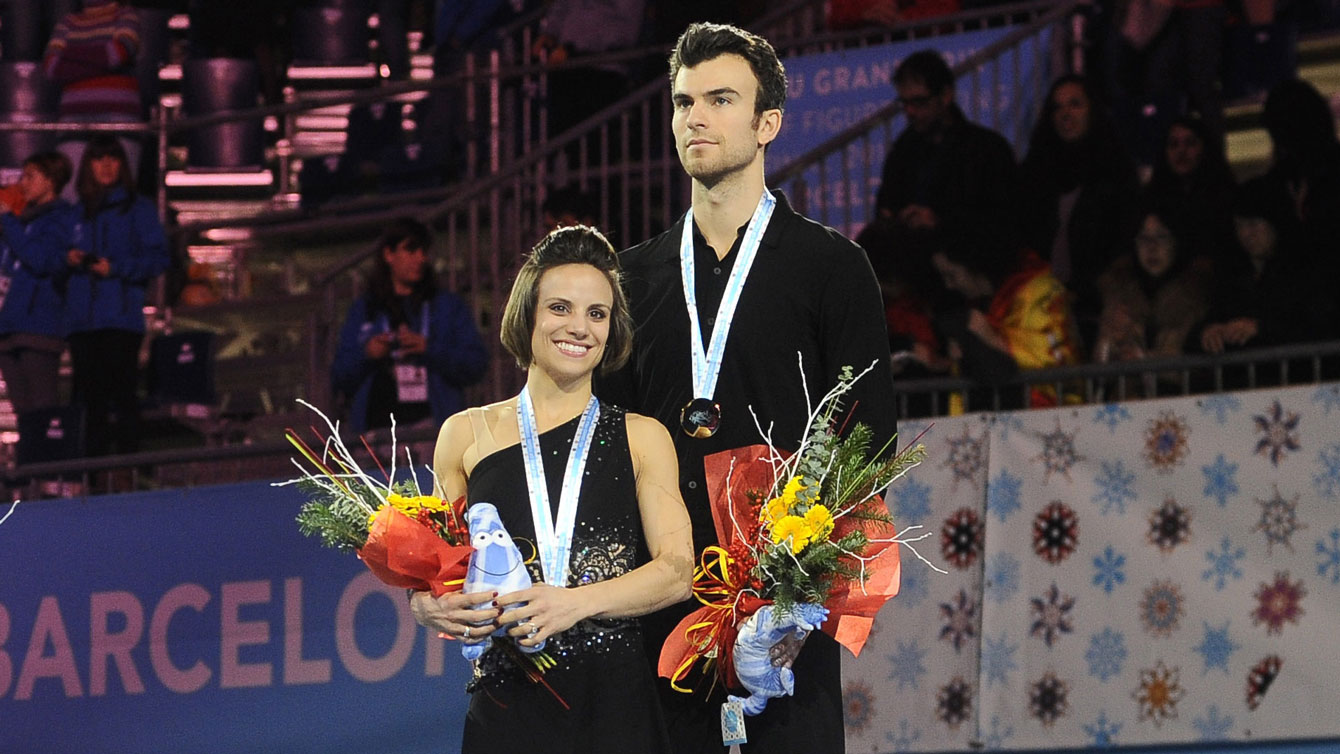 Meagan Duhamel and Eric Radford stand atop the pairs podium at the 2014 Grand Prix Final in Barcelona, Spain.

Most eyes will be on three-time world champion Chan, who is returning to competition after taking the 2014-15 season off. He’ll be immediately thrown into fire, facing the man who beat him for Olympic gold in Sochi, Japan’s Yuzuru Hanyu.

“I’m excited to compete against him and practice in the same practice with him,” said Chan during a recent conference call. “Having accepted a long time ago the results from the Olympics, I’ve moved on and become a better skater by being a better, mature athlete than I was in 2014. It’s a lot of unknowns but a lot of excitement.” 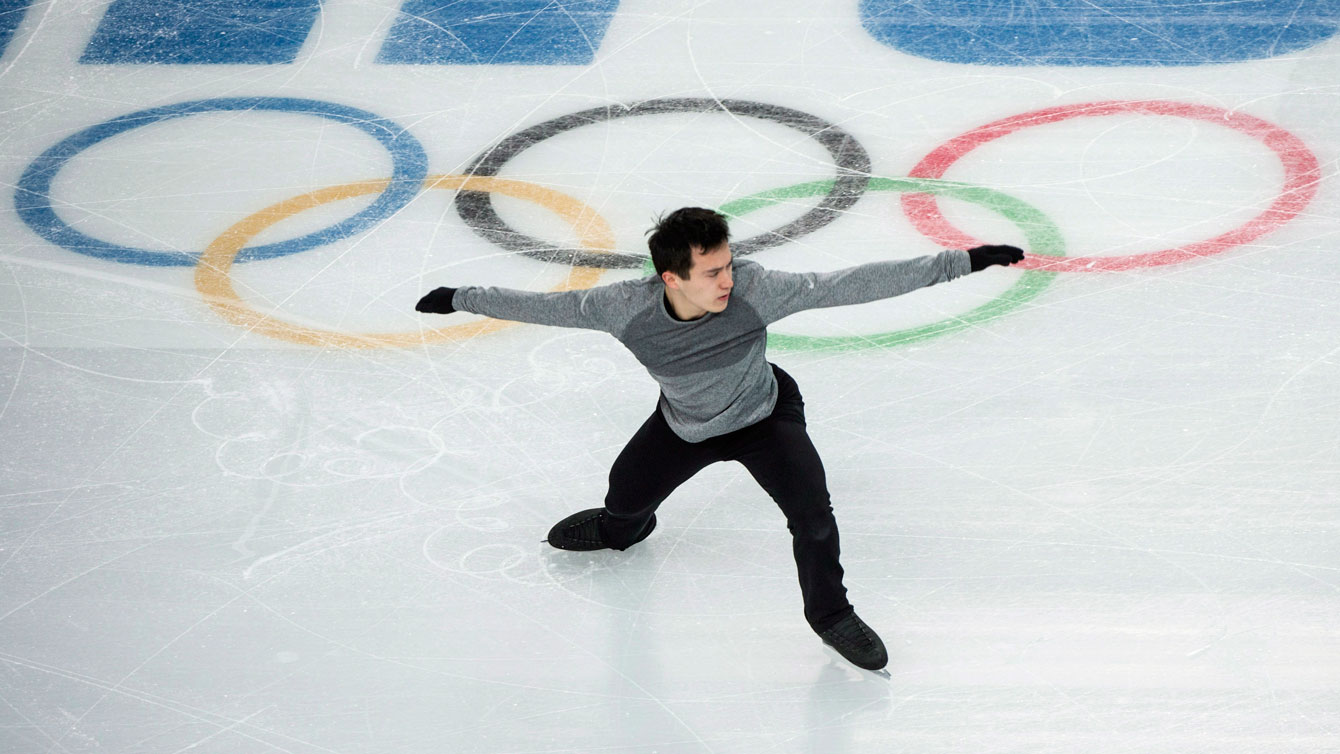 But Chan is not the lone Canadian hope in the men’s event, with 17-year-old Nguyen giving the country one of the best one-two punches in the world after his fifth place finish at the world championships. Messing, who was born and trains in Anchorage, Alaska, first began representing Canada last season when he finished fifth at the national championships.

“I’m of course nervous, but more nervous because I’m excited to show how a year off has influenced me and influenced my skating. I’m skating with a bit of lightness and a breath of fresh air in my skating and that’s something that was missing over the last two seasons.” – Patrick Chan

World champions Duhamel and Radford are the class of the pairs’ field and have further increased the technical difficulty of their free skate by adding a second quad throw, a Lutz, which has never been landed in competition. But they will be keeping an eye on the rest of the world to see if and when it’ll be necessary to input the new element into their long program. 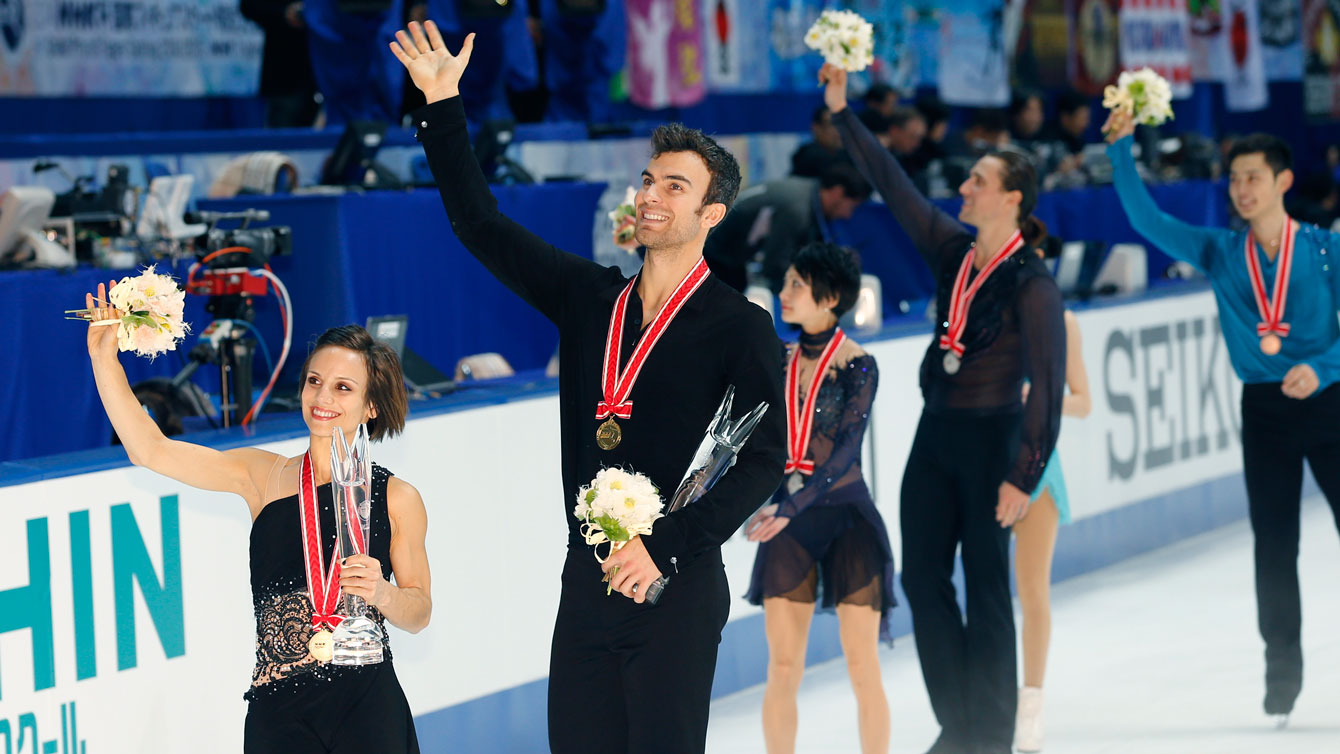 “We don’t know until the season plays out if doing two quads is the right calculated risk or if it’s not,” said Duhamel on their conference call. “We’re going to learn that as the season goes on and as we improve ourselves and our long program improves as well.”

It will be interesting to see how Moore-Towers and Marinaro have developed in their second season together since making a coaching change in the off-season, moving to Montreal to train alongside Canada’s reigning world champions. Grenier and Deschamps, who moved up from junior last season, are also part of the Richard Gauthier-Bruno Marcotte coaching camp. 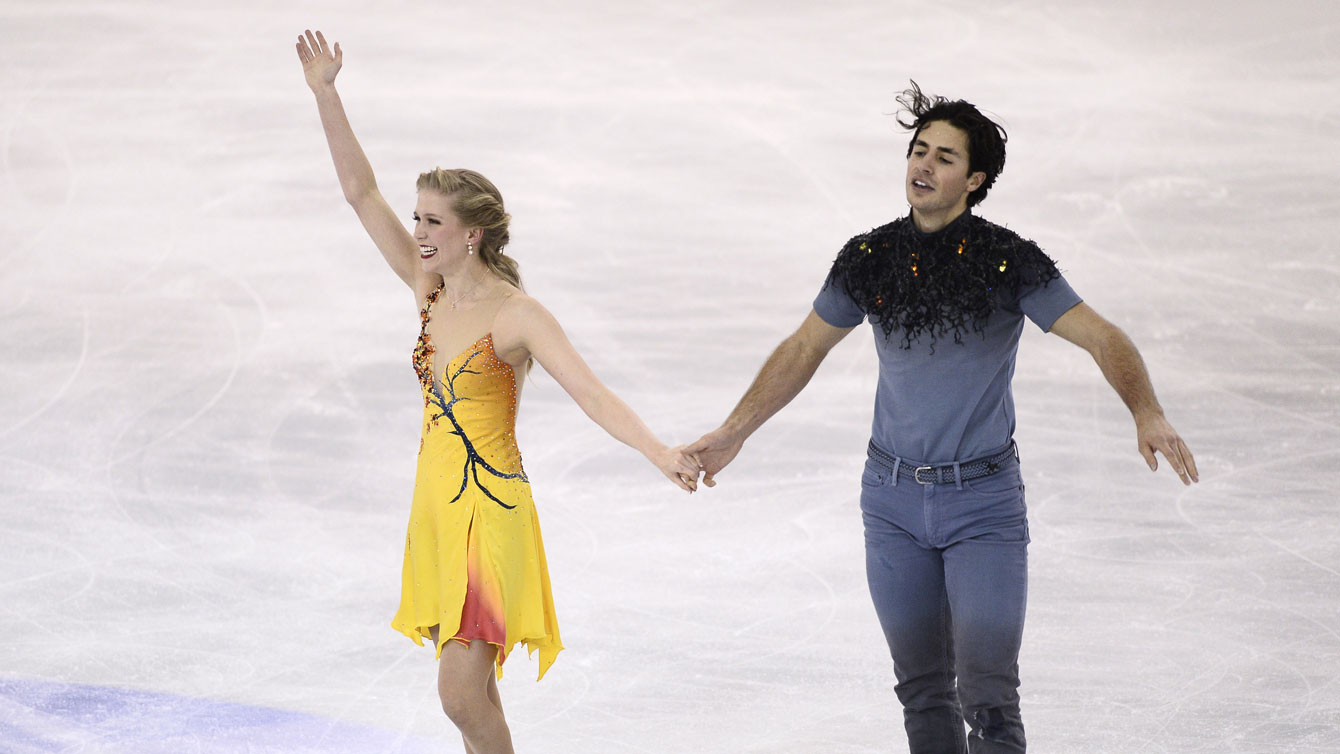 Kaitlyn Weaver and Andrew Poje at the conclusion of the free dance before being crowned ice dance champions at the Grand Prix Final in Barcelona, Spain.

Two-time world medallists Weaver and Poje, who went undefeated last season until the world championships, are the top-ranked team in the field. They got their 2015-16 season off to a strong start with a victory at the Finlandia Trophy. National bronze medallists Paul and Islam won silver in their season debut at Nebelhorn Trophy, following an off-season coaching change which now has them training in Montreal with Canadian Olympians and world medallists Marie-France Dubreuil and Patrice Lauzon. That has become a very popular camp, also including reigning world champions Gabriella Papadakis and Guillaume Cizeron as well as the third Canadian team here of Paradis and Ouellette. There is much curiosity about Russians Ekaterina Bobrova and Dmitry Soloviev who were world bronze medallists in 2013 and fifth at Sochi 2014 before missing last season while he recovered from knee surgery.

Two-time national champion Osmond is also returning after being sidelined last season with a broken leg. She’s already got an international win under her belt this season, taking gold at the Nebelhorn Trophy. Because of injuries, she has only competed at a single Grand Prix event in her career, which happened to be Skate Canada in 2012 which she won. This time she’ll have to contend with defending world champion Elizaveta Tuktamysheva of Russia as well as American veteran Ashley Wagner. But don’t tell her that. 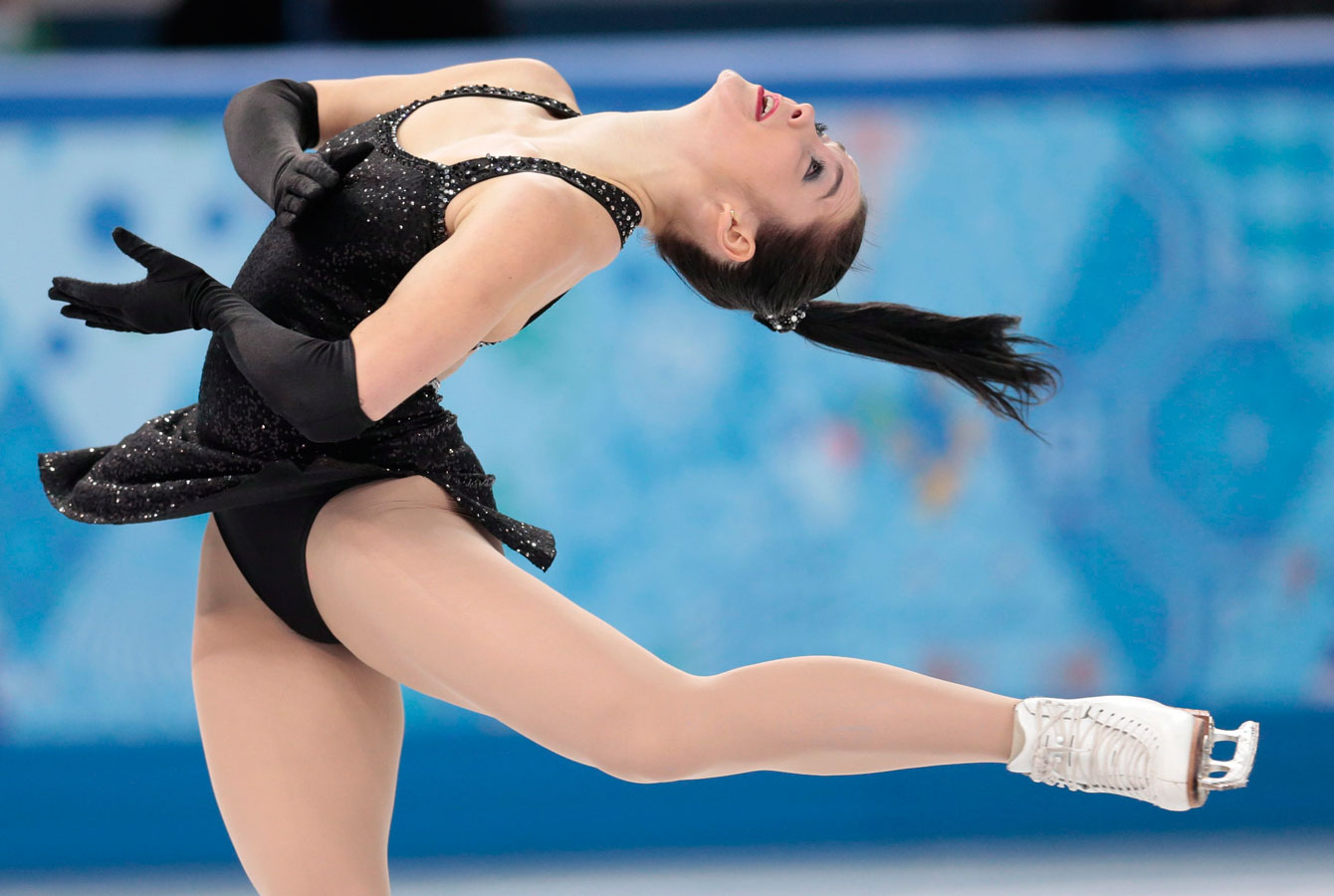 In Osmond’s absence, it was Daleman who claimed the national title last season after being the youngest member of the 2014 Olympic team. She’s now training under Lee Barkell and Brian Orser at the Toronto Cricket Club, sharing the ice with top international talent such as Hanyu and world champion Javier Fernandez of Spain. 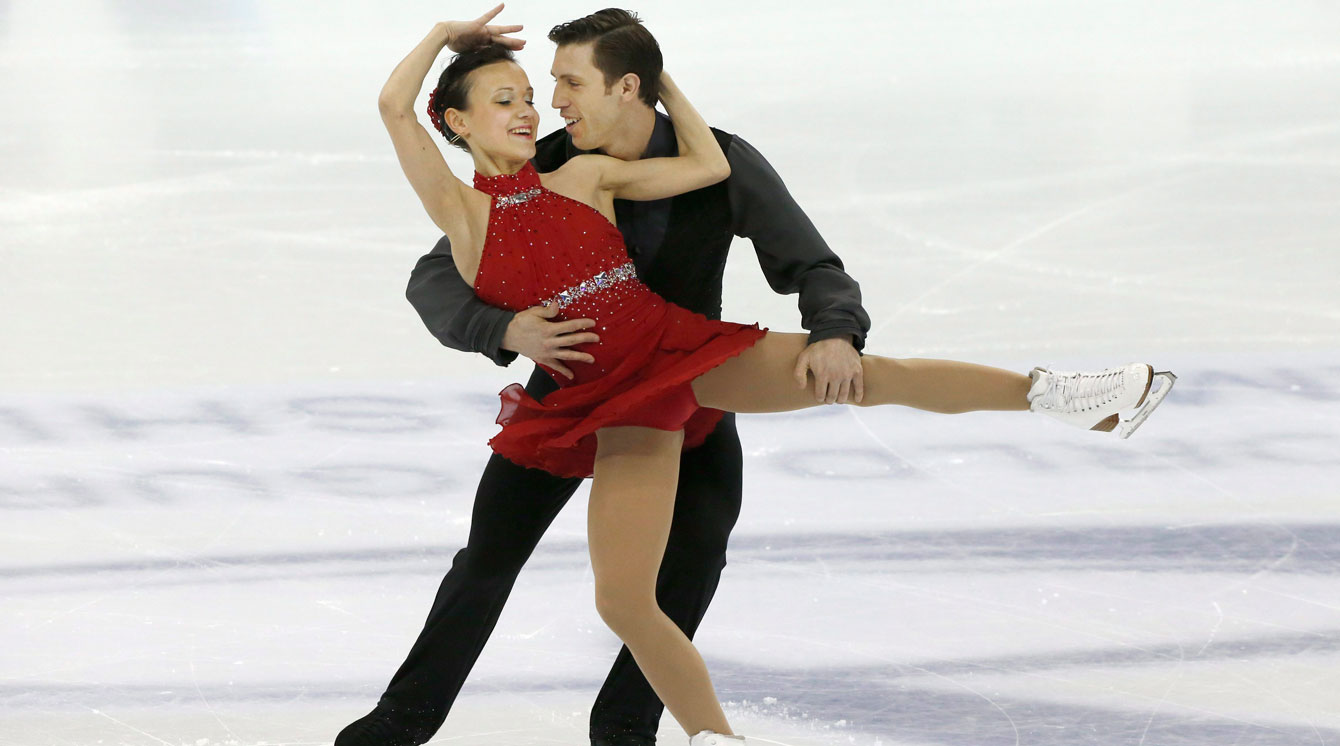 A move back home to Montreal seems to have benefitted Baldé, who had trained in Detroit since 2011. He earned his first career international victory at Nebelhorn Trophy, defeating much more seasoned competitors with a stellar free skate. That should give the showman great confidence as he takes on Fernandez.

In their second season together, Ilyushechkina and Moscovitch will make their Grand Prix debut as a team. At the Ondrej Nepela Trophy they attempted a quad throw flip in their free skate, another element that has never been landed in competition. They’re in tough against three pairs that all made the Grand Prix Final last year: Sui and Han, two-time world junior champions Xiaoyu Yu and Yang Jin, also of China, as well as reigning European champions Yuko Kavaguti and Alexander Smirnov of Russia.