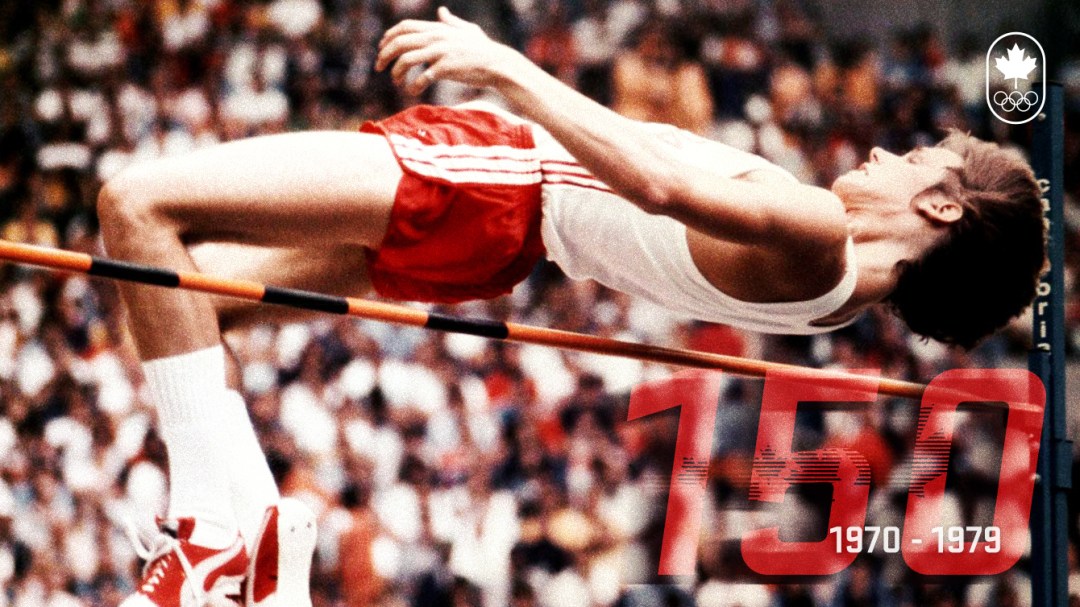 If you need help recalling all the memorable moments we’ve already highlighted, you can find them here.

Now let’s take a look at a decade that included the first Olympic Games hosted in Canada as well as one of the most defining moments in our country’s sporting history.

Canada was the first dominant force in international hockey before slowly giving way to the Soviet Union midway through the 20th century. But what was missing was an opportunity to see the two countries’ absolute best players face off. The professional status of Canada’s biggest hockey stars barred them entry into the world championships and Olympic Games. Meanwhile the Soviets stayed at home, playing away from the NHL. But at the height of the Cold War, when nationalistic feelings were at their peak, the eight-game Summit Series was played. It ended with the dramatics of Paul Henderson’s series-winning goal with just 36 seconds to play in the final game in Moscow – still one of those “where were you when” moments for a generation of Canadians.

The women’s figure skating event at Sapporo 1972 spurred the decline and eventual elimination of compulsory figures. Once worth 60% of a skater’s final score, by 1972 the value was evenly split with the free skate at 50% apiece. Karen Magnussen won Canada’s only medal in Sapporo, taking silver behind Austria’s Beatrix Schuba who had placed only seventh in the free skate but had won the figures. Meanwhile American Janet Lynn had won the free skate but had been only fourth in figures, leaving her third overall. The results confused spectators and prompted the ISU to make a change. The next year, the short program was added, worth 20% of the final score while the value of the figures was reduced to match the free skate at 40%. Magnussen captured the gold medal at the 1973 World Championships, the last Canadian woman to stand atop the world podium.

With the new emphasis on performance and programs rather than figures, the door was opened to skaters who became some of the best-known artists in the sport’s history. Included in that is Toller Cranston who won bronze at the 1974 World Championships and 1976 Olympic Winter Games but was the best in the free skate multiple times at the worlds. Figures were eliminated from competition after the 1990 World Championships. 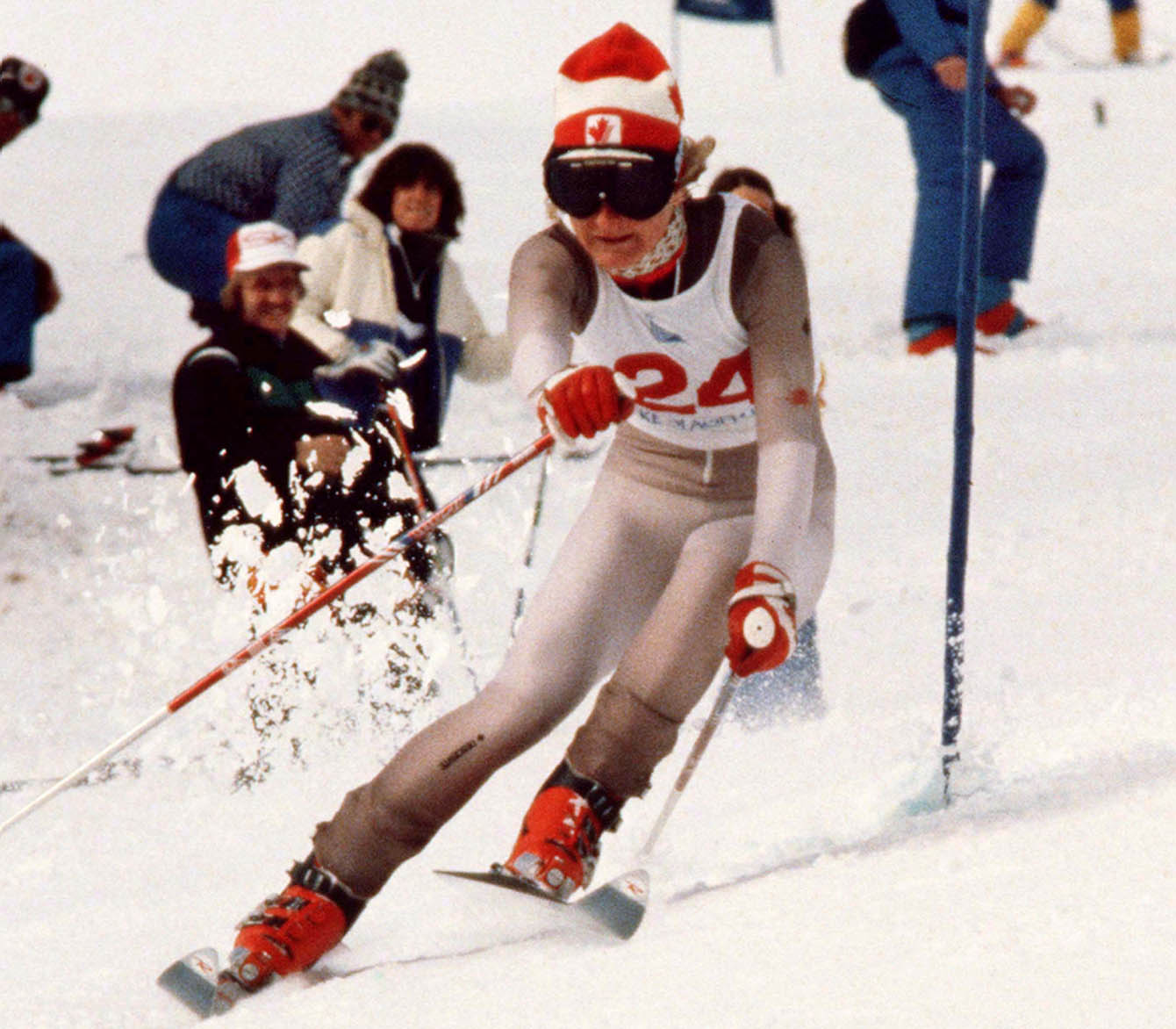 At just 14 years old, Kathy Kreiner strapped on her skis at her first Olympic Games at Sapporo 1972. Not quite podium ready, she returned at Innsbruck 1976 as an 18-year-old who had just three World Cup giant slalom podiums to her credit, including one win in 1974. First out of the gates in the Olympic giant slalom, she had to watch as others tried to beat her time. One of those was German Rosi Mittermaier, who already won the downhill and slalom. Ahead of Kreiner’s pace most of the way, she took a poor line around a late gate, giving Kreiner Canada’s only gold of the Games. At the time, she was the youngest Olympic champion skier in history and remains Canada’s youngest ever Winter Games gold medallist. 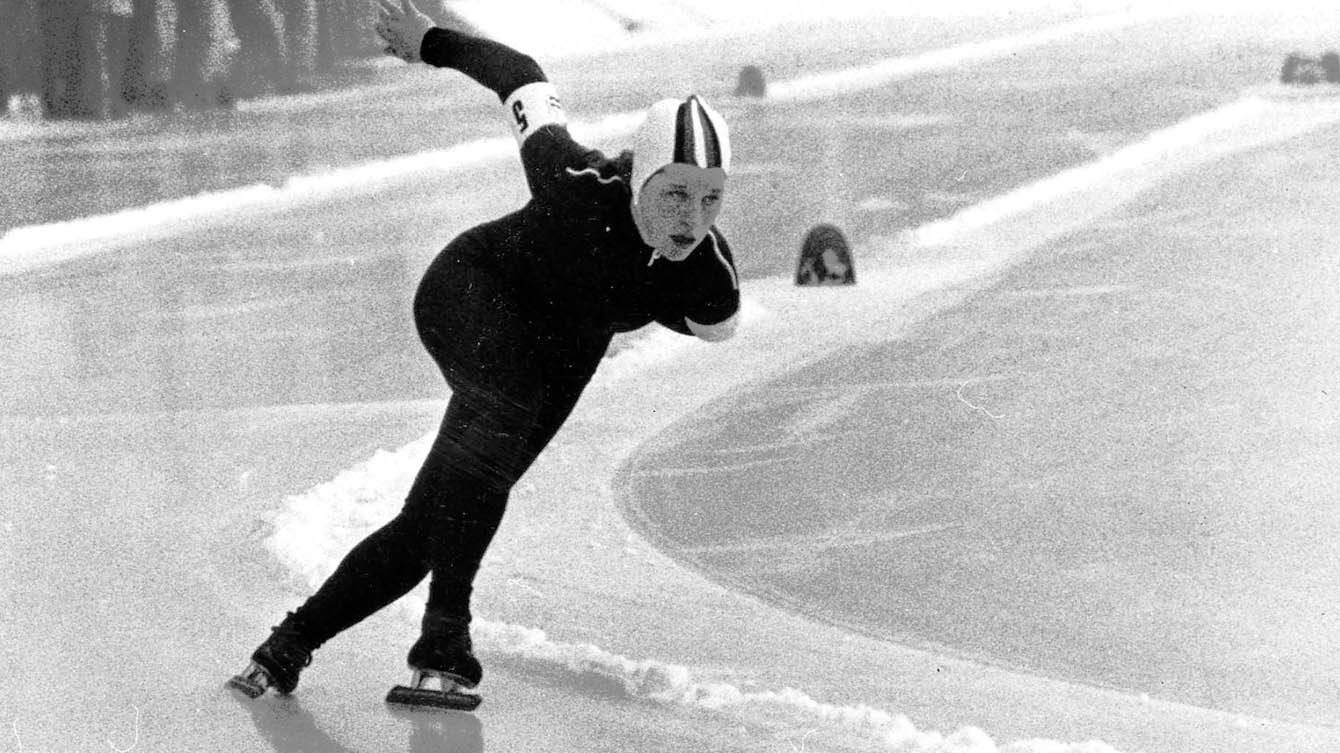 Women’s speed skating was officially added to the Olympic program at Squaw Valley 1960. Eight years later, Cathy Priestner took up the sport. Within a year she had won her first national title. In 1975 she was the bronze medallist at the World Sprint Championships. A year later, in her second Olympic appearance at just 19, she won silver in the 500m at Innsbruck 1976 to become Canada’s first female Olympic speed skating medallist. She carried the Canadian flag into the Closing Ceremony. 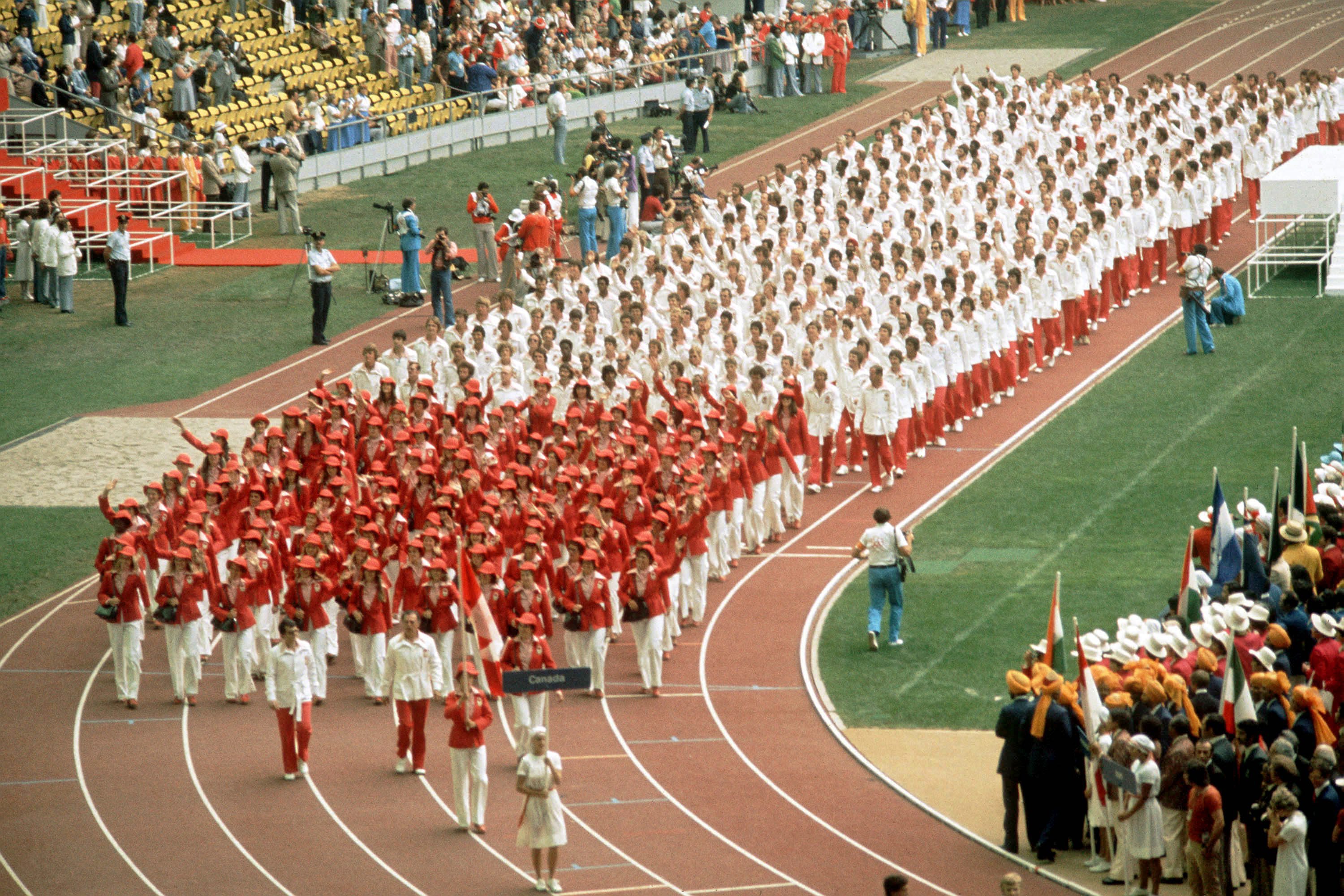 Canadian athletes make their entrance at the Opening Ceremony for the 1976 Olympic Games in Montreal. (CP PHOTO/COC/ RW)

After multiple bids, the city of Montreal was awarded the hosting rights for the 1976 Olympic Games, bringing the world’s biggest sporting event to Canada for the first time. It included a big step towards gender equality as women competed in basketball, handball and rowing for the first time at the Olympic Games. Nadia Comaneci became an international sensation after earning the first perfect 10 in Olympic gymnastics history. And the host country won more medals than it had at the last two Games combined, although none were gold. Instead a lasting image has become Greg Joy winning high jump silver in the rain on the second-last day, helped in part by its place in an O Canada montage that started and ended each broadcast day on CBC.

A pioneer for women’s trap shooting, Susan Nattrass began competing internationally in 1969, a year after Olympic shooting events first became mixed gender and therefore open to women. At Montreal 1976 she became the first woman to compete in Olympic trap shooting. It was the first of her six Olympic appearances over the next 32 years, during which time women were given their own trap shooting event, something Nattrass had long lobbied for. Over the course of her career, Nattrass won seven world titles, five of which came in the 1970s. 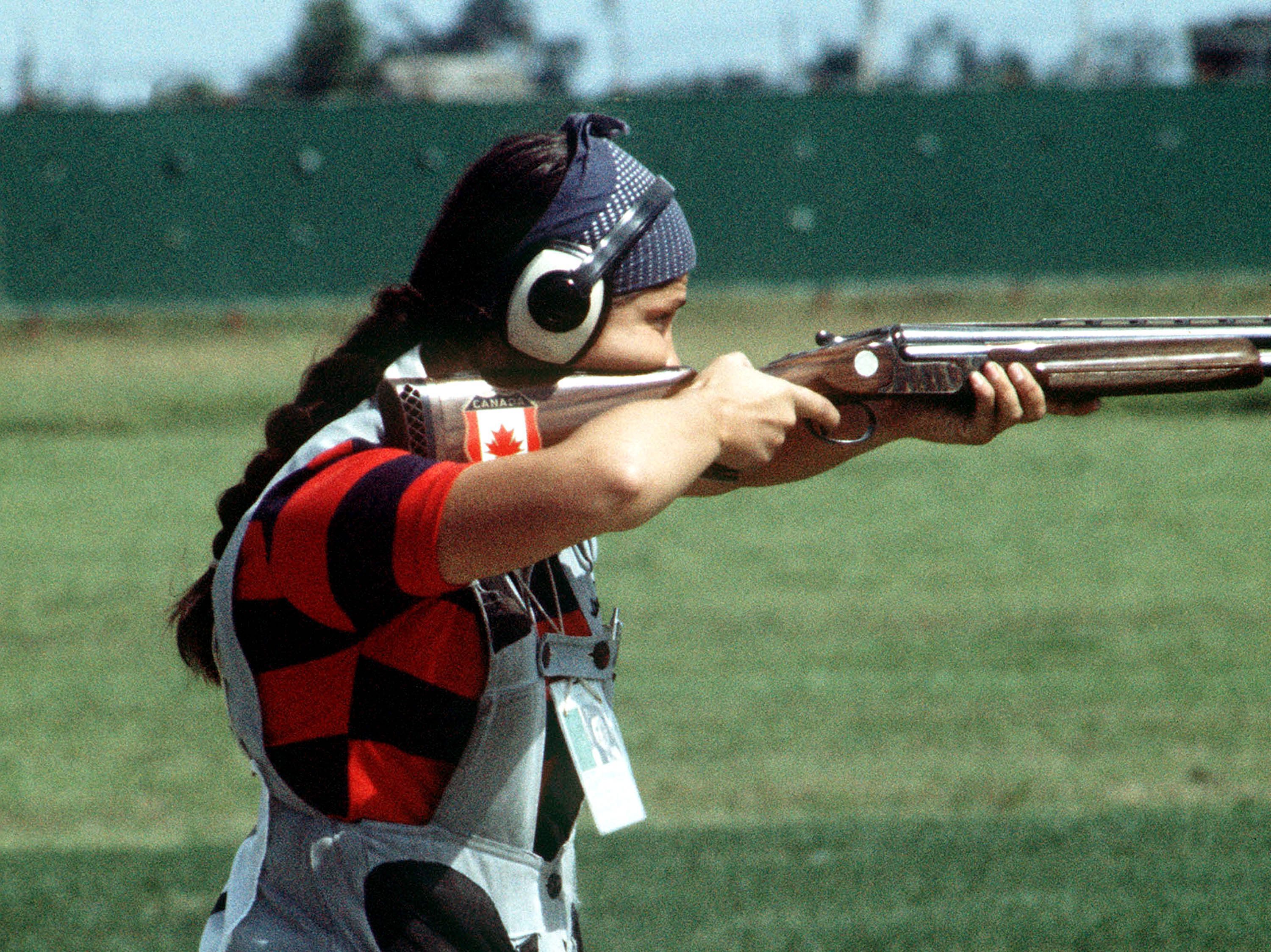 Susan Nattrass competes in the trap shooting event at the Montreal 1976 Olympic Games.

Of Canada’s 11 medals won at Montreal 1976, eight came in the swimming pool, the country’s second-largest total ever in the sport. Included in that was a pair of backstroke bronzes by Nancy Garapick. At just 13, she had set the world record in the 200m backstroke and won two world championship medals to be named the 1975 Bobbie Rosenfeld Award recipient as Canada’s Female Athlete of the Year. In her Olympic debut she finished third in the 100m and 200m backstroke behind two East German swimmers. In the 1990s, evidence finally came to light of the rampant systematic doping that had taken place in East Germany in the decades prior but no retroactive results changes occurred.

Although most of his successes occurred in the 1980s, it was in 1979 that Horst Bulau’s ski jumping career was kickstarted when he won gold at the world junior championships. At just 17, he was the first Canadian to win a Nordic title. Beginning at Lake Placid 1980, Bulau would go on to represent Canada at four consecutive Olympic Games, posting the country’s best ski jumping result ever at Calgary 1988. He stood on World Cup podiums 29 times in his career, including 13 victories, the most by any Canadian male skier at the time. 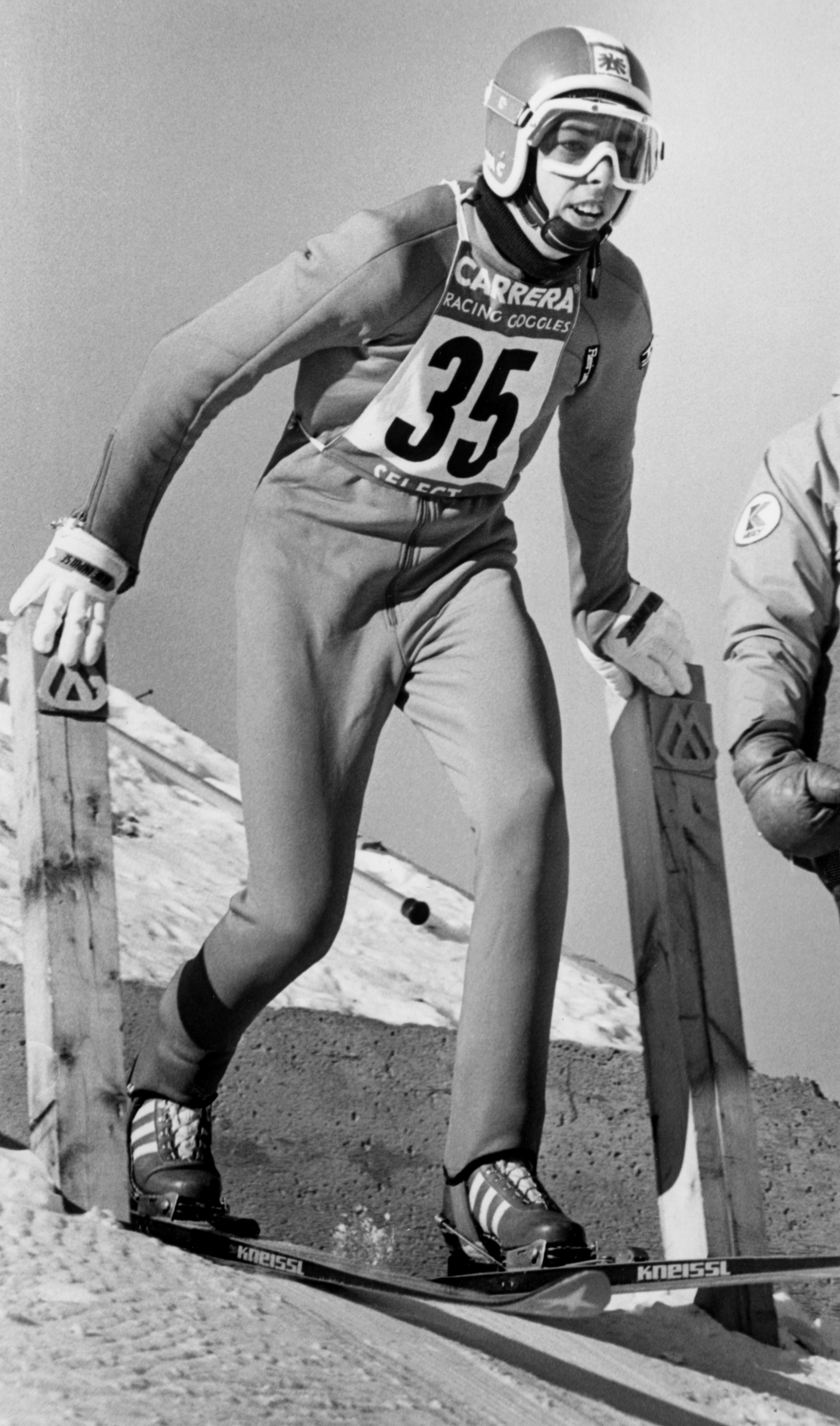 Horst Bulau of Ottawa starts down the takeoff on his way to winning the jumping competition at the World Junior Nordic Championships at Mont-Sainte-Anne in Beaupr, Que., on Sunday, Feb. 18, 1979. Bulau won the competition with 240.4 points. THE CANADIAN PRESS/Chuck Stoody