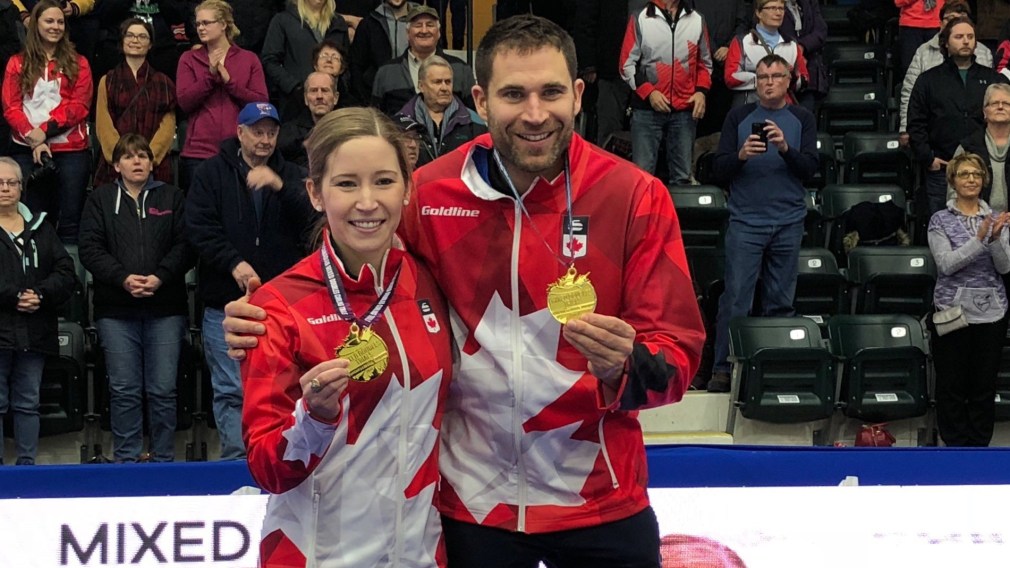 They will now become Team Canada in the first ever Olympic mixed doubles curling tournament.

Sweeting and Gushue had the hammer in the first end, but could only come away with a single point. It was the same for Lawes and Morris in the second end when Lawes made a slight tap on their last stone to tie it.

In the third, Sweeting and Gushue were lying one when Lawes missed on her last shot. That allowed Sweeting to make a hit for two, as she jumped up after throwing the rock to sweep it into the house to give her and Gushue a 3-1 lead.

Facing three opposing stones in the fourth, Sweeting had a slight miss on her last shot. That gave Lawes a chance to score four, which she did as she and Morris jumped ahead 5-3.

In the fifth end, Lawes and Morris were lying two when Sweeting stepped into the hack to throw the hammer. She attempted a runback on the guard, but it was just wide, giving up the steal of two as Lawes and Morris took a 7-3 lead.

Lawes/Morris steal 2 in the 5th end and are running away with this one, now 7-3

Trying to get back into the game, Sweeting and Gushue decided to go for the “power play” in the sixth end, shifting the pre-positioned stones in hopes of scoring multiple points. But the most they could get was two, cutting the lead to 7-5.

It's not over yet! Sweeting/Gushue make good use of their power play and get two back

Lawes and Morris had the hammer in the seventh, but gave up a steal of one to Sweeting and Gushue to make it a one point game heading to the final end.

With the hammer again in the eighth, Lawes and Morris decided to use their power play in an attempt to seal the victory. Sweeting went for a hit and roll on her last shot to try to get the steal, but it was a little too thin, giving Lawes and Morris the win.

That feeling when you book your ticket to the Olympic Games.
Lawes, Morris will represent Canada in mixed doubles curling at #Pyeongchang2018 🥌https://t.co/qzAa8FFV2R pic.twitter.com/nRM2AB2DTb

Lawes and Morris are both Olympic gold medallists. Morris was the third for skip Kevin Martin at Vancouver 2010 while Lawes was the third for skip Jennifer Jones at Sochi 2014. They teamed up for the mixed doubles trials after Morris’ original partner, Rachel Homan, skipped her team to victory at the Roar of the Rings in December to earn a spot in PyeongChang. No Canadian curler has ever won two Olympic gold medals. Lawes will be the first Canadian curler to compete at back-to-back Olympic Games.

Lawes and Morris will be the first Canadian athletes to hit the field of play in PyeongChang, with the mixed doubles round robin starting the day before the Opening Ceremony.