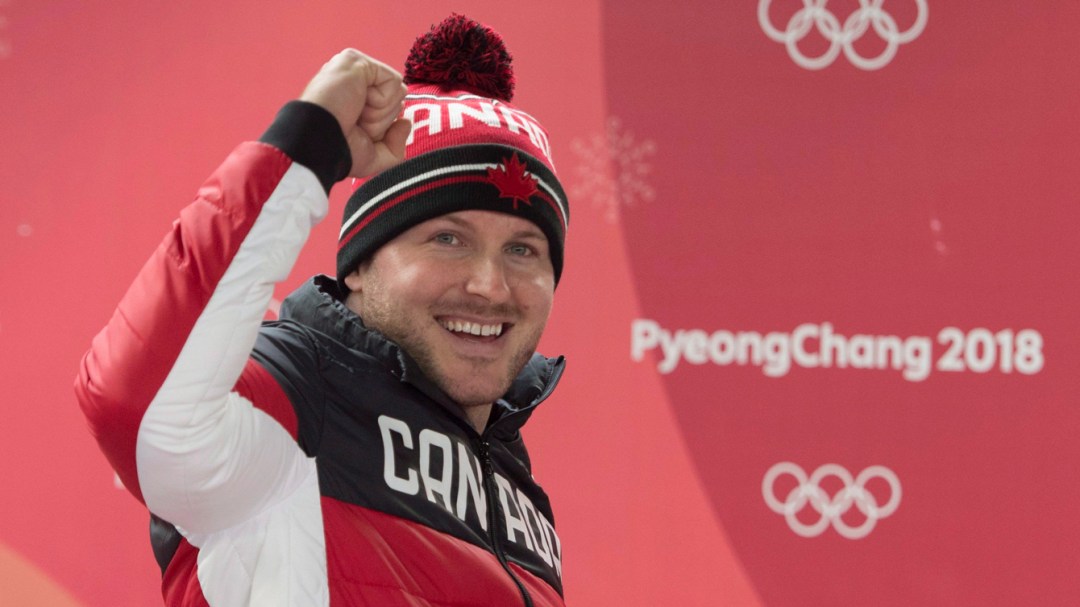 Confusion creates chaos for high performance athletes, even when it comes with a joyous international track invasion, and news of a joint-gold medal that puts them on par with one of their heroes.

On Monday, after piloting Canada to its first two-man bobsleigh Olympic gold in two decades, Justin Kripps was puzzled why the Germans were celebrating, until he realized the countries had tied for the top spot on the PyeongChang 2018 podium. 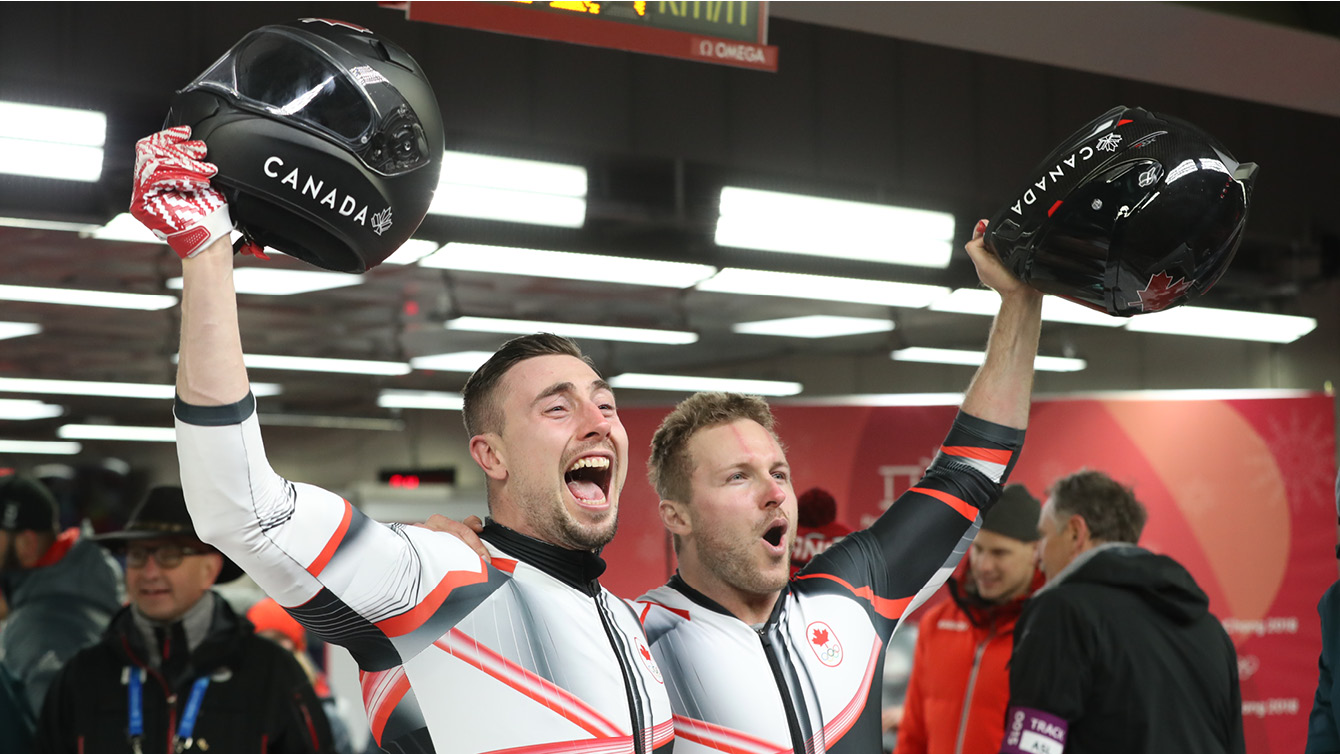 “That was amazing,” Kripps recalled. “When I crossed that line, I managed to actually see the clock and it said number one, it’s pretty tough to see when you’re ripping up the breaking stretch, but I was just so excited and everyone started mobbing onto the track.”

“Then I saw the Germans, and they were super excited too, and I was like ‘it’s really nice that they’re excited that we won,’” Kripps said to laughter around him.

“We’re all good friends, and when the mob dispersed a little bit Thorsten (Margis) was giving me a hug, and he was in my ear, he was like ‘it was three hundredths, then two and then we tied,’ and I was like ‘we tied?’ … it’s amazing.” 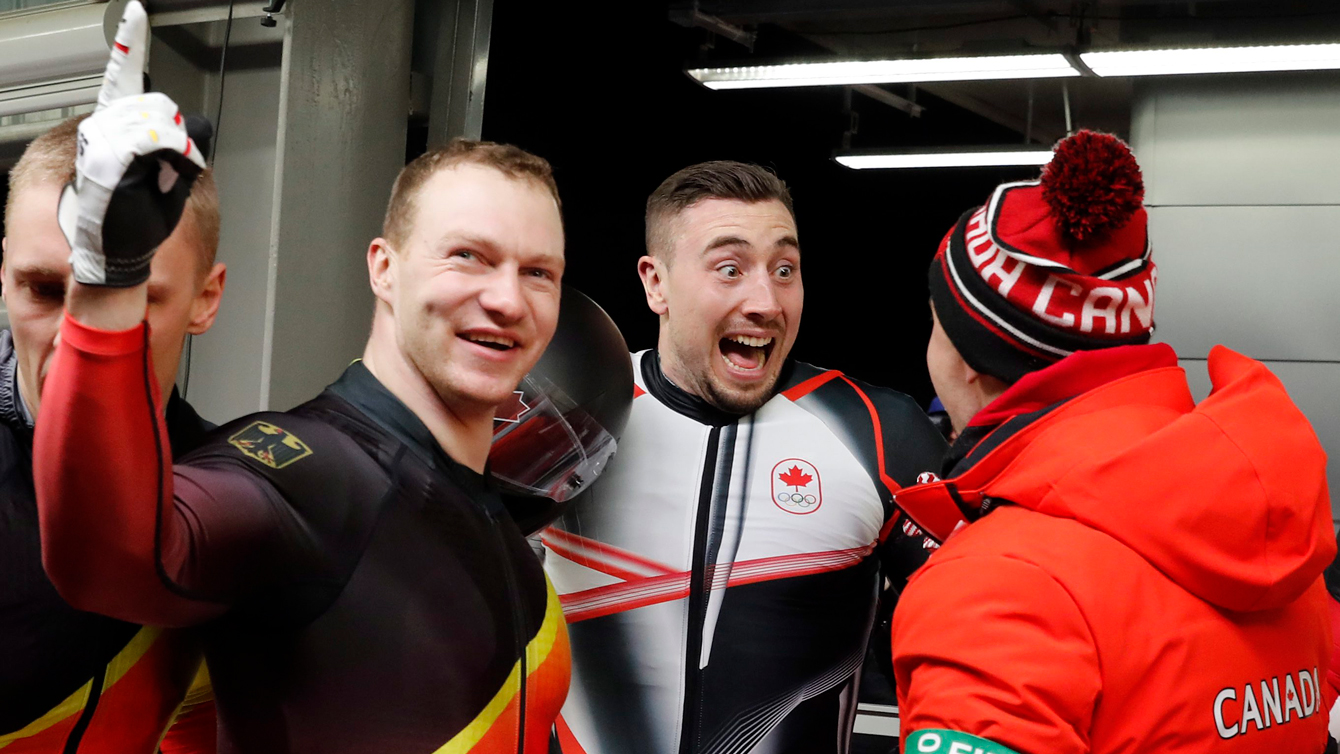 Alex Kopacz (centre) celebrates with a German rival (left) and a teammate after the two countries tied for two-man bobsleigh gold at PyeongChang 2018 on February 19, 2018.

Kripps with brakeman Alex Kopacz completed their four runs over two days in three minutes, 16.86 seconds, the identical time registered by German pilot Francesco Friedrich and his partner Thorsten Margis. Latvia’s Oskars Melbardis and Janis Strenga finished just 0.05 behind for bronze, with two more German sleds rounding out the top five within 0.28 seconds of the winners in an incredible competition where any one of them might’ve sprinted away with gold.

Kopacz too was uncertain and it wasn’t until he had further discussions with Kripps and the Germans that he fully grasped what happened.

“(I feel) stunned, that’s the best way to put it,” said the Canadian brakeman. “I didn’t actually understand that we had tied until we were in the changing room talking to everybody.”

“There’s no symbol for tie,” on the trackside clock, Kripps joked. 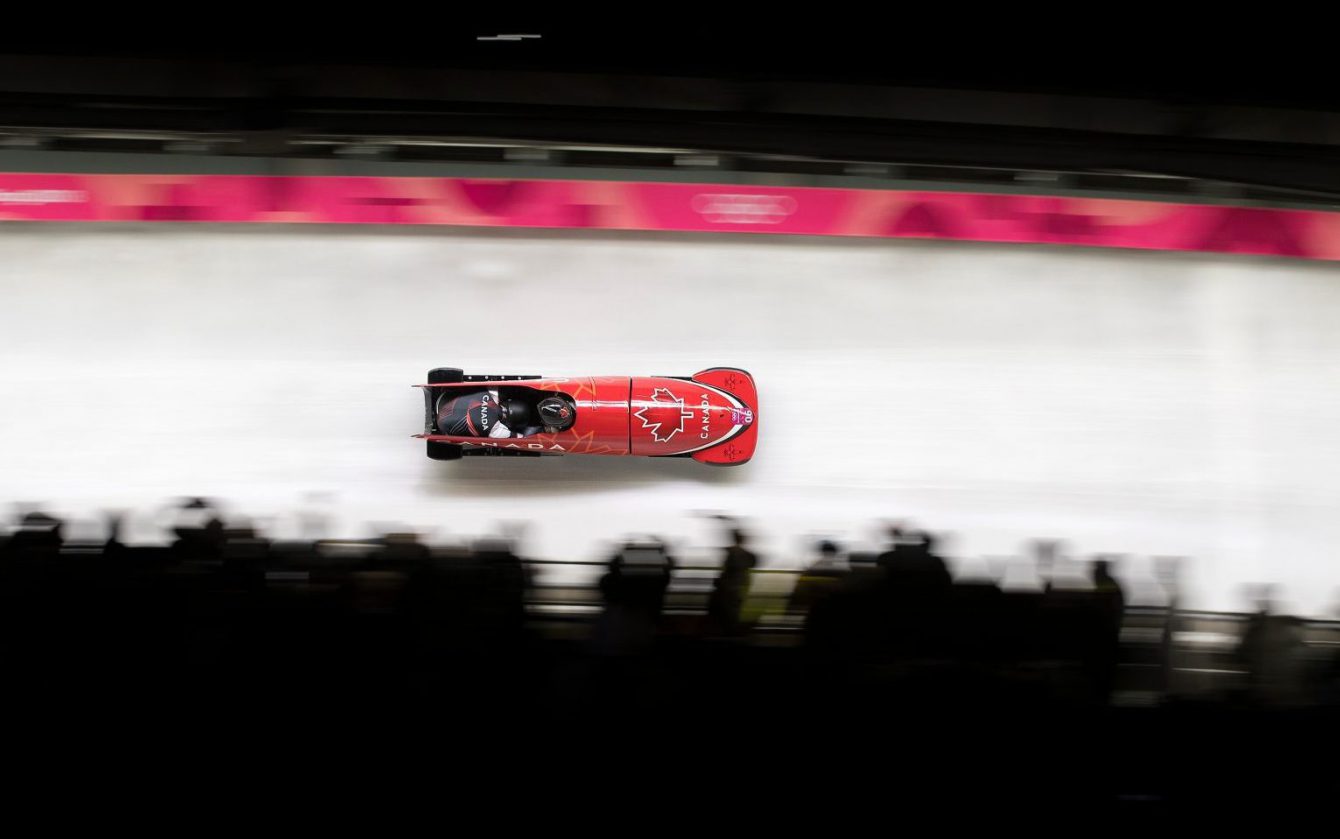 Canada’s Justin Kripps and Alexander Kopacz drive through turn 14 during their third run in the 2-man bobsleigh at the PyeongChang 2018 Olympic Winter Games in Korea, Monday, February 19, 2018.
THE CANADIAN PRESS/HO – COC – Jason Ransom

As it’s usually the case in sliding disciplines where cumulative time counts, consistency was key for Canada to topple the competition. Kripps and Kopacz were second after each of their two opening runs, however the leading sled switched from Melbardis to Nico Walther of Germany following the second round on Sunday.

At the conclusion of a topsy-turvy third run, Walther had dropped to fifth place, while Friedrich drove his sled to a track record moving him and Margis up to second. But steady as they had been throughout the first day, Kripps and Kopacz did enough to get to the top, the third set of leaders after three runs in an intensely competitive atmosphere.

When Friedrich and Margis delivered another strong result in the fourth and final run, separating themselves as the German sled to beat, Kripps and Kopacz got on the track and matched their output. 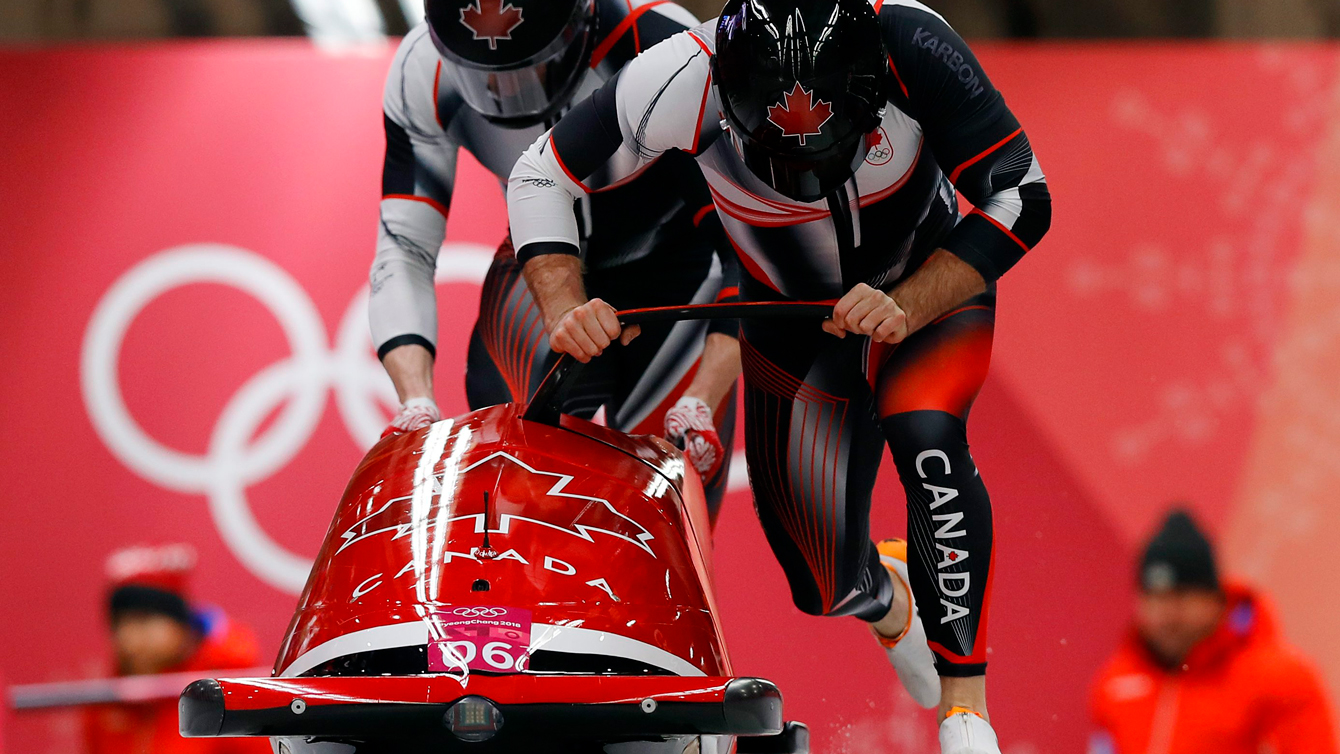 “Francesco laid down such an amazing run and Thorsten has been pushing really well,” Kripps said complimenting his rivals. “I tried to keep my mind clear and do my thing and we laid down the best run I have ever had. And we managed to take a couple of hundredths off the push too and we definitely needed it.”

The win comes in the same fashion as it did for one of Kripps’ idols, Canadian bobsleigh icon Pierre Lueders. Back in 1998 – the last time Canada won gold at this event – it was also a tie when Lueders and Dave MacEachern shared the Olympic title in Nagano with Gunther Huber and Antonio Tartaglia of Italy.

Lueders went on to win silver at Turin 2006 in the two-man with current Olympian Lascelles Brown. It was the last time Canada stood on the Olympic podium in this event. Kripps joined Lueders as a brakeman in his four-man sled for Vancouver 2010 that finished fifth, before beginning pilot school shortly thereafter under the legend. 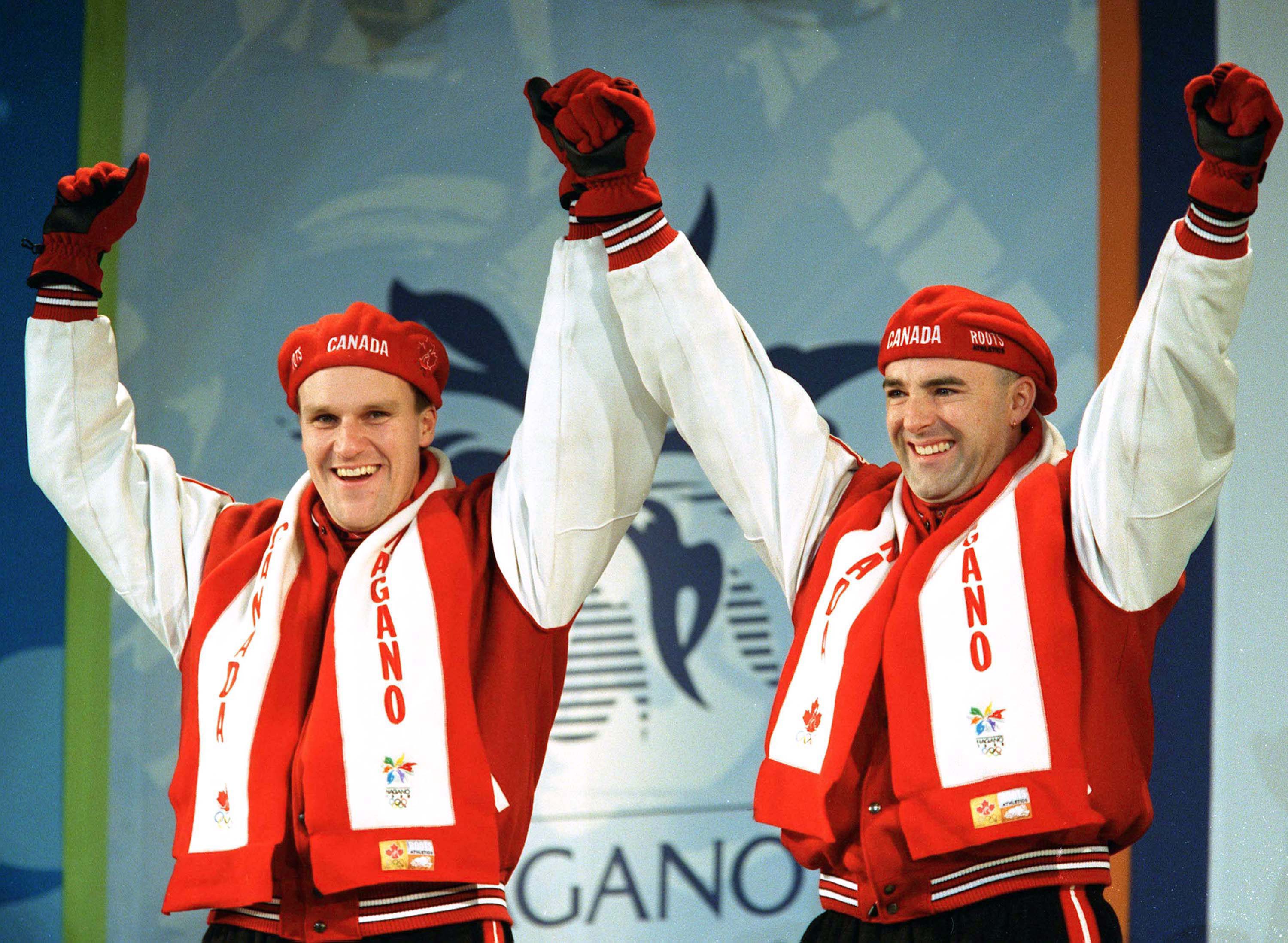 “It’s incredible, it’s the culmination of a lot of work.”

Lueders is coaching South Korea at their home Games, and Kripps hasn’t seen his former mentor due to the competitive nature of the circuit.

“We sit down in the summer, and we catch up, but during the season it’s all business and I respect that.” 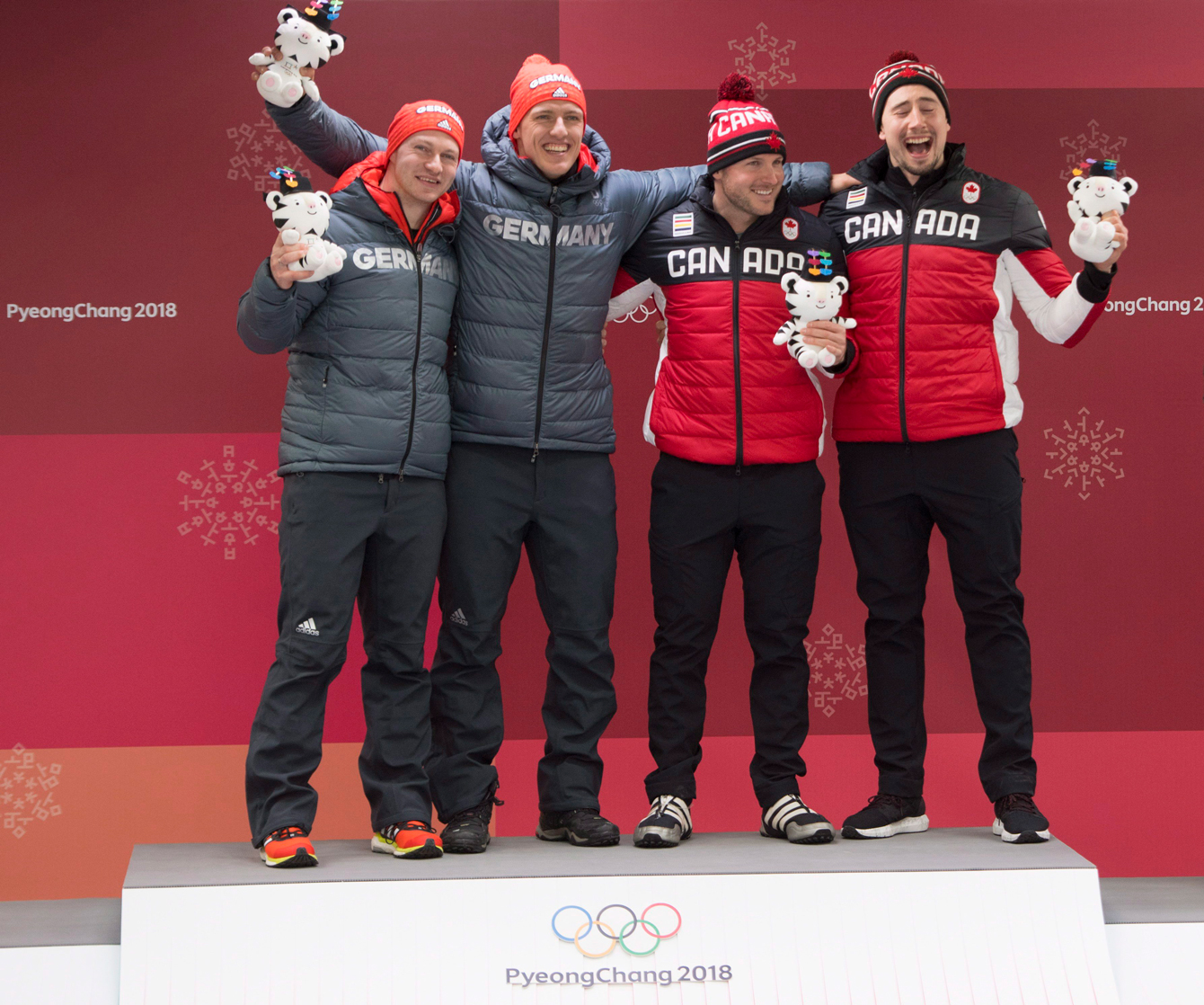 Canada’s Justin Kripps and Alex Kopacz share the top step of the Olympic podium in two-man bobsleigh with Germany on February 19, 2018.

Legacy has been an important feature for Canada at the Olympic Games. Be it in freestyle skiing where Jean-Luc Brassard got Canada rolling as a moguls powerhouse, or the path created by Charles Hamelin and Marianne St-Gelais‘ success as they give way to the next generation of short track speed skaters, lineage in Canadian sport continues to play a major contributing factor in present-day success.

While still beaming with wonder that he and Kopacz are sharing the top step of the Olympic podium with “amazing competitors” who have been “friends and rivals for years,” Kripps took the time to give a big nod to Lueders.

“He taught me the fundamentals, pretty much everything I know about bobsleigh. It’s incredible.”