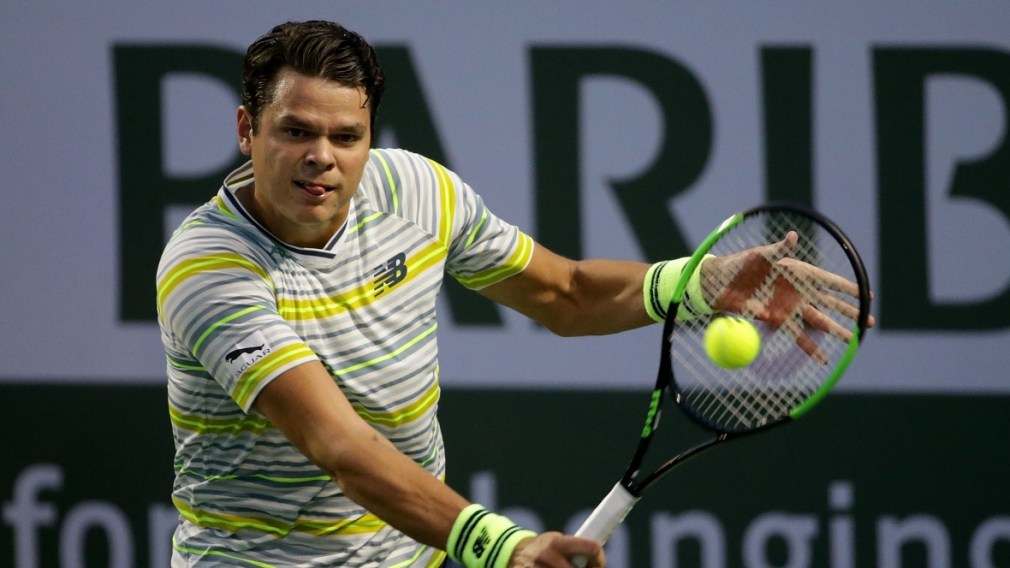 By The Canadian Olympic Committee
March 13, 2018

A roller coaster affair at Indian Wells, California eventually fell in Milos Raonic’s favour as he put together a formidable third set and advanced to the fourth round of the ATP Masters 1000 tournament.

Starting under the mid-afternoon Palm Desert sun, the match extended into the early evening hours as Joao Sousa of Portugal pushed the Canadian to three sets before Raonic triumphed 7-5, 4-6, 6-2 in two hours and 11 minutes.

Serving notice: Milos Raonic is back in the round of 16 of a @ATPWorldTour Masters 1000 for the first time since Rome last year.

The bulk of the match was played in the first frame that went nearly an hour. Raonic might’ve wrapped it up earlier but for Sousa’s determination and some unforced errors for the Canadian (he had 37 in the match). The third game alone lasted almost 10 minutes, where Raonic had five chances to break Sousa. The Portuguese scrambled back each time before holding with three consecutive first serve points.

A little later, it was Raonic’s turn to survive a scare. At 4-4, the Canadian conceded a break point to Sousa, allowing the Portuguese to serve for the first set. Facing a must-win game, Raonic wasn’t wasteful next time he had a chance to steal one from Sousa, converting his sixth break point to get back on terms. That seemed to motivate Raonic as he made quick work of Sousa in the following two games, first holding then breaking again to take a one set lead at 7-5.

It looked as though Raonic would coast from the first set momentum shift as he had Sousa on the run twice in the second, but the Portuguese player saved both break points before sending the contest to distance. As he had in the first set, Raonic fell behind again at 4-4, wildly misfiring on serve for two straight double faults to hand Sousa the game. Having lost his advantage in the first set, given another chance the Portuguese fared much better in the second, consolidating to win 6-4 and sending the match to an all-important third.

Uninterested in a repeat of the second set letdown, Raonic played a clean and dominant final frame. The third set saw the 27-year-old Canadian tighten things up serving the opening game at love, and only growing in strength from there.

Raonic’s first return win percentage in the decider went up to 50% from an abysmal 5% in the second set, putting pressure on Sousa’s service game. When on serve, Raonic suffered just one double fault in the third set versus nine through the first two. The Canadian didn’t face another break point either, while taking the two offered by Sousa, including the match point to win the set 6-2.

The path for Raonic to go deep at the tournament often dubbed ‘the fifth slam’ (to show its importance on tour alongside the four majors), has cleared up somewhat with big casualties in his half of the draw. Former world number one Novak Djokovic fell on Sunday, while world no. 3 Marin Cilic has also bowed out.

Raonic advanced to the third round beating Canadian teen sensation Felix Auger-Aliassime, and will take on the winner of Cypriot Marcos Baghdatis and Israeli Dudi Sela in the fourth.

Should he get past his next challenger, the quarterfinals could see a showdown with American world no. 10 Jack Sock, should he win his next two matches.

Tuesday’s win marks the first time in 2018 that Raonic won two straight matches in a bid to regain form after an injury-filled 2017 season.