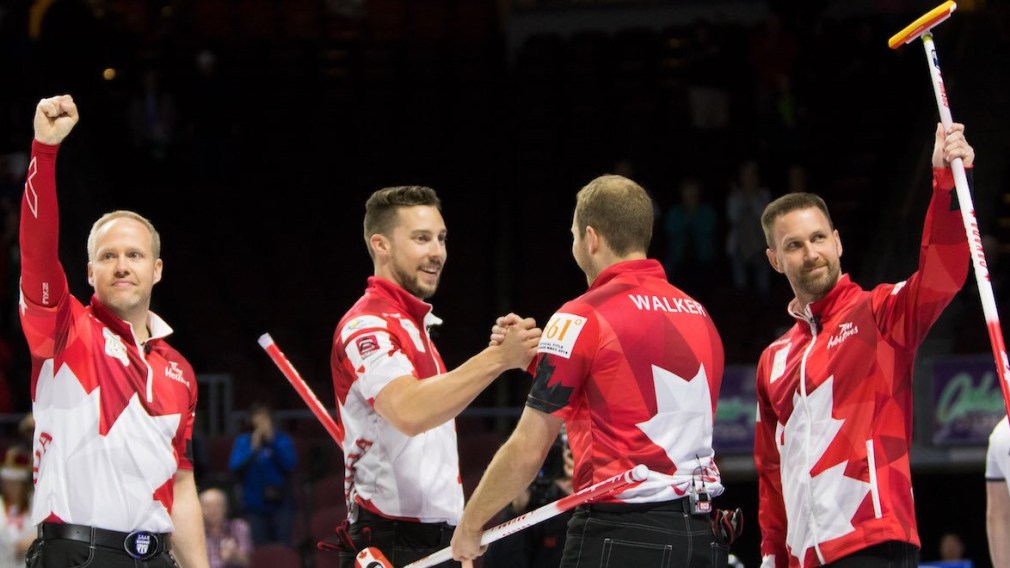 Team Gushue will play for gold at the World Men’s Curling Championship after defeating Scotland 9-5 in their semifinal on Saturday night in Las Vegas.

That sets up a rematch of last year’s final, in which Brad Gushue and his team of Mark Nichols, Brett Gallant and Geoff Walker defeated Sweden’s Niklas Edin for their first world title.

“It will be a tough game,” Gushue said in looking ahead to the final. “Niklas and his team are a great team, one of the best in the world. They have hammer starting out, so I think for the first five ends, it’s going to be about wrestling the hammer back. I certainly expect a tight game and for it to come down to the last rock.”

Holding the first end hammer, Scotland opened the scoring as skip Bruce Mouat made a draw to the four-foot for two. But Team Gushue got that deuce right back in the second end. A  couple of misses by the Scots in the third end gave Canada a steal of one for the 3-2 lead. But Mouat and his team regained the lead in the fourth end, making a double takeout to score two.

The fifth end proved to be a bit of a roller coaster for Team Gushue. They looked to be heading into a situation where they might score four or five points, but Mouat caught a break when his narrow takeout attempt rubbed on a guard, removed a Canadian stone, and then rolled to be frozen against Canada’s shot stone. Gushue had to overcome the big break the Scots had gotten and make a clutch draw to the four-foot for the single to tie it 4-4.

“I was pretty hot and I had to cool myself down to make that,” said Gushue. “It would be real easy to throw that to the back of the eight-foot, and probably earlier in my career, I would have.”

“If we don’t make that, we’re down two,” added Nichols. “After a shot goes that way (for Scotland), you just have to collect yourself and make sure you make that shot. If you don’t, you’re really struggling to get back into the game.”

After Scotland scored one in the sixth, the Canadians got the big scoring end they were looking for in the seventh. Gushue made two precision runback takeouts to put three points on the board for a 7-5 lead. Steals in the eighth and ninth ends secured the victory.

“You could see it in his eyes tonight,” said Nichols of his skip. “We were all pretty into it. It was just about, don’t get in each other’s way. And don’t get in Brad’s way when he’s seeing those shots.”