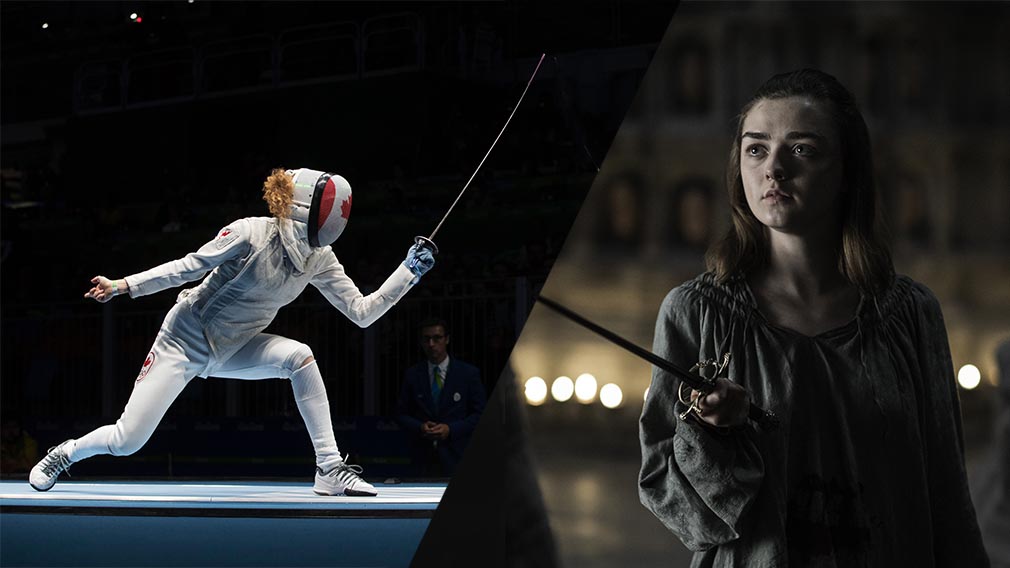 The countdown is on to the final season of Games of Thrones.

Just like when the Olympic Games are upon us, the anticipation is building quickly. We’re ready for our palms to be sweaty and our hearts to be racing almost as much as they were when Tessa and Scott were skating for gold.

And that got us thinking: what Olympic sports would the Westerosi residents we love (and love to hate) compete in if they were high performance athletes?

We had a few thoughts.

Of all the great swordsmen (and swordswomen) in the Game of Thrones world, the one we’d most like to see on a fencing piste is Arya. Small but mighty, she trains diligently, wields Needle with flair, and confuses her opponents while showcasing her great accuracy. We definitely wouldn’t want to be on her list.

Our favourite blacksmith wasn’t seen on the show for three seasons after Ser Davos set him free from Dragonstone and he set off in a rowboat back to King’s Landing. He’d never rowed before but he made it the length of Blackwater Bay so we think he could manage a 2000m Olympic course.

Brienne of Tarth and The Hound

Okay, so there were probably some moves in this match-up that are illegal according to the rule books that govern Olympic combat sports. But this epic showdown in the season four finale between two heavyweights was certainly worth waiting for.

The Prince of Dorne didn’t get the outcome he was looking for when he stepped in as Tyrion Lannister’s champion in his trial by combat (any athlete will tell you, it ain’t over til it’s over). But the way Oberyn leapt around The Mountain while twirling his spear couldn’t help but make us recall a rhythmic gymnast.

You can’t say the red-headed wildling knew nothing about archery. When Jon Snow remained loyal to the Night’s Watch, she used her true aim to allow her ex-lover to live – even while getting her payback by shooting him with three arrows.

The King in the North is what you’d call an all-around athlete. He’s good on a horse. He’s got skills with a sword. He’s always on the run from one White Walker or another. We saw him land his punches on Ramsay Bolton. But we think he’d be up for some sport climbing, given that he’s already done the tough haul to the top of The Wall.

This woman (excuse us, khaleesi) honed her equestrian skills with the Dothraki, the greatest riders in the world (have you seen them stand atop their saddles?).

But it’s the communication she has with her beloved dragons that reminds us of the horse-rider connection seen in show jumping. Dracarys.

Could it be anything other than the javelin? The assumed Big Bad of the series showed off his arm strength when he shot down dragon Viserion during Daenerys’ mission to rescue Jon Snow and company beyond the wall.

Olympic Games of Thrones
55 Olympic and Paralympic hopefuls awarded the 2020 Petro-Canada FACE™ grant
Shuttlecock and balls: The fastest moving objects in sport
Adventure, culture and food: 9 things Peru is famous for
Team Canada athletes in acting roles
What to expect from Canadian tennis players at the French Open