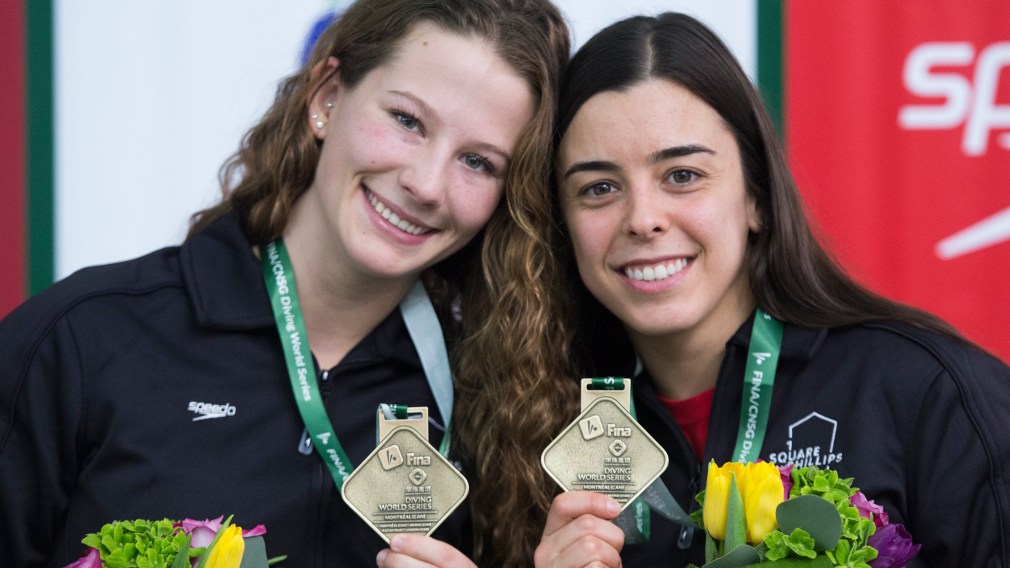 To start off the day, Meaghan Benfeito and Caeli McKay won gold in the synchronized 10m platform event in the morning.

The pair sat in second place through the first two dives of the final, trailing only Malaysia’s Mun Yee Leong and Pandelela Pamg. After a mistake on the third dive dropped them to third, Benfeito and McKay gave the home crowd a treat as they mounted their comeback.

Their fourth dive was the highest scoring attempt to that point in the final, earning 73.26 points, propelling them up into first place. They locked up the gold with an even better final dive, scoring 76.80.

Their cumulative score of 313.02 was enough to top Leong and Pamg who finished in second with 297.66 points, while Ekaterina Beliaeva and Iuliia Timoshinina from Russia, took the bronze with 288.30 points.

"We want to show that we kind of own this place" – And own it they did!
Canada's @MegBenfeito & @caemckay come out on top in the women's 10m synchro platform event in Montreal at the #DWS2020 @DivingCanadahttps://t.co/YVSM3swnrK pic.twitter.com/1dtsRjbQ0o

In the evening, Jennifer Abel and Mélissa Citrini-Beaulieu won gold in the women’s 3m synchro event. The Tokyo-bound duo stayed in first place overall throughout their six dives. They finished with a total score of 298.83 points. Joining them on the podium were Mexicans Paola Espinosa Sanchez and Melany Hernandez Torres (286.20 points) and Russians Kristina Ilinykh and Mariia Poliakova (285.60 points).

To end off the day, Vincent Riendeau and Nathan Zsombor-Murray won bronze in the men’s synchronized 10m platform. The duo had an overall score of 407.76 points, and were in second place before slipping to third after their final dive. Ahead of them on the podium were Kevin Berlin Reyes and Ivan Garcia Navarro of Mexico in second (407.94 points), and Russians Aleksandr Bondar Viktor Minibaev in first with 412.44 points.

It is worth noting that there are no Chinese divers participating in Montreal. Usually a dominant force, this opens up opportunities for the Canadians to shine at home as they embark on the road to Tokyo 2020.

Competition continues through Sunday in Montréal at the Olympic Park Sports Centre.

Canada wins two gold, one bronze at FINA Diving World Series in Montreal
What are the differences between baseball and softball?
Shuttlecock and balls: The fastest moving objects in sport
Adventure, culture and food: 9 things Peru is famous for
What is the difference between racquetball and squash?
Korea 101: Korean Customs and Traditions