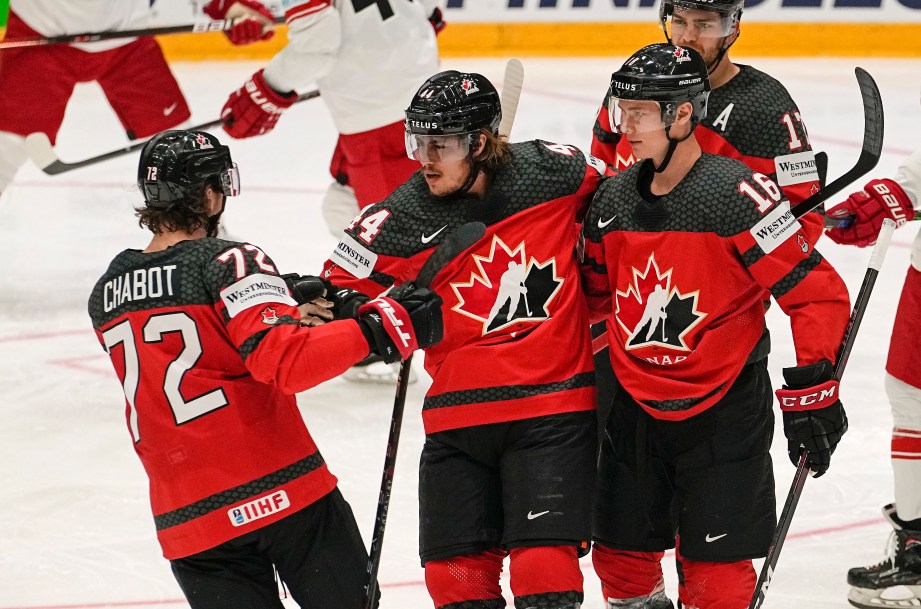 The 2022 IIHF Men’s World Hockey Championship is underway! The Canadians are on the ice in Finland against the best teams in the world from May 13 – 29.

Team Canada hit the ice hungry for a win and did not disappoint. In their final game of round robin play they faced France and came away with a convincing 7-1 win to wrap up the preliminary round of the 2022 IIHF Men’s World Hockey Championship in Finland.

Dylan Cozens opened the Canadian scoring up with a beautiful tip in front of the net to secure his fourth goal of the tournament. Before the end of the first, Max Comtois also found the back of the net on a rebound to score for his second consecutive game.

Early in the second period, Pierre-Luc Dubois scored his fifth goal of the tournament, beating the keeper with a top net shot. Eric O’Dell, who has represented Canada at the last two winter Olympics, then made the score 4-0 with a quick a shot over the pads of the French goalie.

In the third period, while each team was serving a penalty Zach Whitecloud scored off of an assist from Dawson Mercer. Anthony Rech then netted the only goal for the French 8:20 into the third bringing the score to 5-1. Team Canada then responded with two goals from Damon Severson (15:19), Pierre-Luc Dubois (11:16) — his second goal of the game.

Canada now ends the preliminary phase of the tournament in third place of Group A with a 5-2 record behind Switzerland (7-0) and Germany (5-2).

Here are the summaries of previous matches:

Canada lost their second straight game of the IIHF World Championships after falling to Denmark 3-2. It’s the first time in the history of the men’s tournament Denmark has beaten Canada.

Denmark came out aggressive and finally broke through to open the scoring at the 9:11 mark in the first period on a wrist shot by Markus Lauridsen. The Danes continued to apply pressure and nearly scored on a tipped shot that hit the Canada crossbar a few minutes later. With five minutes to go in the period, Canada turned the puck over in the neutral zone and Peter Regin scored a shorthanded goal to give Denmark the 2-0 lead.

Max Comtois scored two and a half minutes into the second to cut the lead to 2-1. Denmark’s goaltender Sebastian Dahm kept Canada from evening the score with nine saves in the period.

The two teams exchanged goals in the final ten minutes of the third period to set up a frantic finish, but Denmark’s defense held on to win 3-2.

With the loss, Canada falls to fourth in Group A play sitting at 12 points. They will take on France tomorrow in the final game in the preliminary round.

Canadians returned to the ice on Saturday, for their fifth tournament game falling 3-6 against Switzerland. The first period was the most exciting 20 minutes of this year’s tournament so far. It was a wild ride with six back-and-forth goals and Switzerland trailing three times. Kent Johnson started the scoring off for Canada, barrelling down the left side and banking a shot in off the Swiss goaltender from behind the goal line at 11:52.

Less than a minute later, the Swiss found the back of the Canadian net but Adam Lowry was quick to make it 2-1 for Canada with a short-handed breakaway. Lowry collected the puck at his blue line from a turnover, and as he went in on the goal, he lost the puck on the deke. The move fooled the Swiss goaltender and the puck slid between his pads. Switzerland responded quickly once again, roofing a shot on the power play to get back on the board.

With less than a minute to go in the first period, Drake Batherson pushed Canada into another short-lived lead. This time Matt Barzal kept the puck in at the blue line and slide a smart pass to Batherson who moved in front and beat the Swiss goaltender to the stick side with 56.6 seconds left. Switzerland responded with seconds remaining, raising the score to 3-3 to end the first period.

The second period was much quieter with shots only 5-5 in the frame and Switzerland posting one power play goal. They were able to control play and contain Canada for the rest of the period. Then the Swiss went up by two in the third, extending their lead to 5-3. With two minutes to go, Switzerland sealed the deal with an empty netter to win 6-3.

This win moves the Swiss into first place in Group A and gives them the inside track to play the fourth place team from Group B in the cross-over quarterfinals. However, both teams, have two games remaining.

Canada took to the ice against Kazakhstan for their fourth game of the tournament and secured a 6-3 victory to stay undefeated in round robin play.

Both teams were busy in the first period with five total goals being scored. Kazakhstan started the game off early with a goal by Yegor Petujhov at 2:25 that was quickly equaled by Canadian Dylan Cozens. After a trio of Canadian penalties Arkadi Shestakov of Kazakhstan found the back of the net to regain the lead. The final two goals of the period came from Team Canada’s Drake Batherson and Adam Lowry who took advantage of Canada’s first power play to take the lead and finish the period 3-2.

In the second period, Kazakh goalkeeper Andrei Shutov made several key saves to keep his team in the game, including this impressive save against Kent Johnson. Fresh out of the penalty box Canadian Damon Severson snuck past the defenders and was able to shoot one by him though ending the period 4-2.

7:55 into the third period, Kirill Savitski scored for the Kazakhs as Canadian defensemen Ryan Graves lay on the ice unable to get up after blocking a shot. Taking advantage of two penalties from Kazakhstan, Dylan Cozens was able to find the net twice at 51:58 and 59:11 completing his first hat trick of the tournament and securing a 6-3 win for Canada.

The round robin round continues until May 24 in Finland. Canada will face Switzerland — who is also undefeated in this tournament, on May 21 at 9:20 a.m. ET. The playoffs will begin on May 26.

Continuing on with their hot streak Canada improved to a 3-0 record after closing out their third game with a 5-1 win over Slovakia.

The score was tied 1-1 after the first period when a goal scored by Canadian Adam Lowry was answered by Slovakian Samuel Takac during a power play.

Assistant captain Pierre-Luc Dubois responded in the second period with two goals — one on a power play, and one after fighting through the entire Slovakian line. They finished the period with a score of 3-1 after some monster saves in the net by goaltender Logan Thompson.

Canada went on to score two more goals in the final period when Cole Sillinger found the back of the net at 41:08, and Morgan Geekie got one of his own midway through the third. The Slovakian’s were unable to respond and Team Canada came away with a 5-1 victory.

Catch them back in action on Thursday May 19 against Kazakhstan as they continue round robin play.

Canada improved to 2-0 at the IIHF Men’s Hockey World Championship after a convincing 6-1 win over Italy.

Sunday’s game got off to a bit of a shocking start after Italy’s Phil Pietroniro buried a wrist shot past the glove of Chris Driedger to open the scoring in the first period. Canada quickly responded with a goal on a slap shot from Travis Sanheim that tied the game 1-1.

From there, the floodgates opened for Canada as they peppered the Italy goal with three goals on eleven shots in the second period. Six different Canadians would go on to tally a goal on the scoresheet in a 6-1 win.

Canada looks to remain unbeaten as they take on Slovakia on Sunday, May 16.

In the first period, the Canadians took an early lead thanks to a goal from Cole Sillinger. Before the end of the first Pierre-Luc Dubois also added to the scoring finishing the period 2-0.

At the start of the second, Germany came back and found the back of the net, but that wasn’t enough against Team Canada who shot in two power play goals by Dubois (31:37) and Kent Johnson (33:39). Noah Gregor ended the period with a goal giving Canada a 5-1 lead heading into the third.

After a third period riddled with penalties the Germans were able to knock in two more goals at 41:13 and 52:35 but they were unable to close the gap on the Canadians. Team Canada secured their first win of the tournament finishing the game with a score of 5-3.

This team will be back in action on May 15th when they take to the ice against Italy. 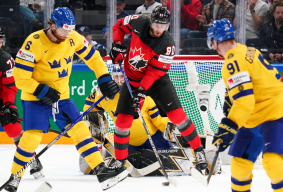 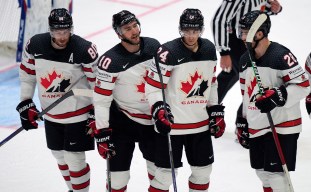