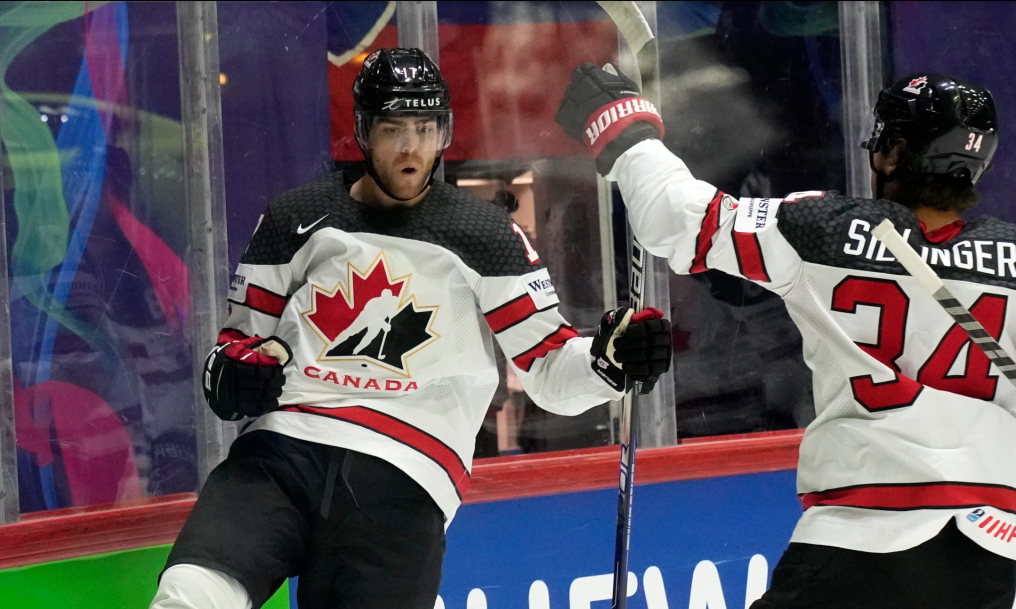 The 2022 IIHF Men’s World Hockey Championship has begun! The Canadians are on the ice in Finland against the best teams in the world from May 13 – 29.

Canada took to the ice against Kazakhstan for their fourth game of the tournament and secured a 6-3 victory to stay undefeated in round robin play.

Both teams were busy in the first period with five total goals being scored. Kazakhstan started the game off early with a goal by Yegor Petujhov at 2:25 that was quickly equaled by Canadian Dylan Cozens. After a trio of Canadian penalties Arkadi Shestakov of Kazakhstan found the back of the net to regain the lead. The final two goals of the period came from Team Canada’s Drake Batherson and Adam Lowry who took advantage of Canada’s first power play to take the lead and finish the period 3-2.

In the second period, Kazakh goalkeeper Andrei Shutov made several key saves to keep his team in the game, including this impressive save against Kent Johnson. Fresh out of the penalty box Canadian Damon Severson snuck past the defenders and was able to shoot one by him though ending the period 4-2.

7:55 into the third period, Kirill Savitski scored for the Kazakhs as Canadian defensemen Ryan Graves lay on the ice unable to get up after blocking a shot. Taking advantage of two penalties from Kazakhstan, Dylan Cozens was able to find the net twice at 51:58 and 59:11 completing his first hat trick of the tournament and securing a 6-3 win for Canada.

The round robin round continues until May 24 in Finland. Canada will face Switzerland — who is also undefeated in this tournament, on May 21 at 9:20 a.m. ET. The playoffs will begin on May 26.

Here are the summaries of previous matches:

Continuing on with their hot streak Canada improved to a 3-0 record after closing out their third game with a 5-1 win over Slovakia.

The score was tied 1-1 after the first period when a goal scored by Canadian Adam Lowry was answered by Slovakian Samuel Takac during a power play.

Assistant captain Pierre-Luc Dubois responded in the second period with two goals — one on a power play, and one after fighting through the entire Slovakian line. They finished the period with a score of 3-1 after some monster saves in the net by goaltender Logan Thompson.

Canada went on to score two more goals in the final period when Cole Sillinger found the back of the net at 41:08, and Morgan Geekie got one of his own midway through the third. The Slovakian’s were unable to respond and Team Canada came away with a 5-1 victory.

Catch them back in action on Thursday May 19 against Kazakhstan as they continue round robin play.

Canada improved to 2-0 at the IIHF Men’s Hockey World Championship after a convincing 6-1 win over Italy.

Sunday’s game got off to a bit of a shocking start after Italy’s Phil Pietroniro buried a wrist shot past the glove of Chris Driedger to open the scoring in the first period. Canada quickly responded with a goal on a slap shot from Travis Sanheim that tied the game 1-1.

From there, the floodgates opened for Canada as they peppered the Italy goal with three goals on eleven shots in the second period. Six different Canadians would go on to tally a goal on the scoresheet in a 6-1 win.

Canada looks to remain unbeaten as they take on Slovakia on Sunday, May 16.

In the first period, the Canadians took an early lead thanks to a goal from Cole Sillinger. Before the end of the first Pierre-Luc Dubois also added to the scoring finishing the period 2-0.

At the start of the second, Germany came back and found the back of the net, but that wasn’t enough against Team Canada who shot in two power play goals by Dubois (31:37) and Kent Johnson (33:39). Noah Gregor ended the period with a goal giving Canada a 5-1 lead heading into the third.

After a third period riddled with penalties the Germans were able to knock in two more goals at 41:13 and 52:35 but they were unable to close the gap on the Canadians. Team Canada secured their first win of the tournament finishing the game with a score of 5-3.

This team will be back in action on May 15th when they take to the ice against Italy. 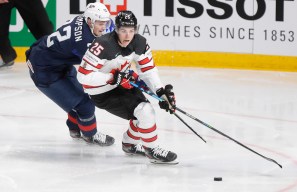 Devon Levi was the starting goaltender for Team Canada at the 2020 IIHF World Junior Championships. He led the tournament...