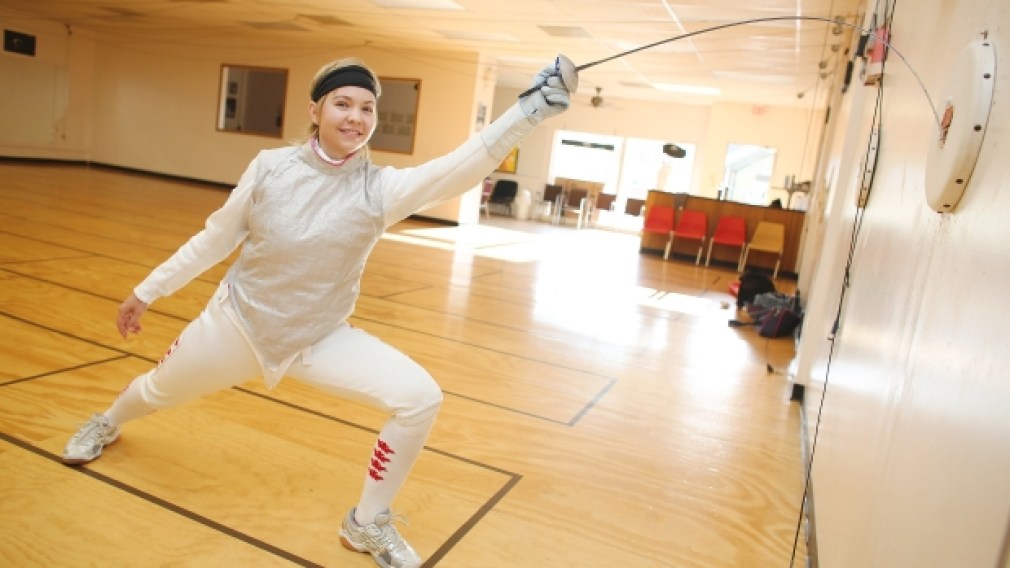 Being an athlete requires maximum efforts to the point of exhaustion, a lot of sacrifices, and the determination of refusing to do anything that could hinder that competitive edge in the relentless pursuit of a dream. Being a farmer requires long hours of heavy, hard and exhausting labor, and constant toil of plowing, sowing, tending, and reaping the hopeful harvest.

This is the perfect combination that works for 30-year-old #OneTeam ambassador, Shannon Comerford.

Raised on a honey farm just twenty minutes outside of Saskatoon, the farm was always her calling.

Although farming honey is the family business and requires long hours of work, it isn’t the only thing that keeps her occupied. Now an Olympic hopeful for the Tokyo 2020 Games, Shannon began fencing when she was 8-years-old following in the footsteps of her brother. She has competed on both the cadet (U17) and Junior (U20) national team. As well, as a member of the Senior national team since 2009 she has helped the team match a best result for any Canadian women’s foil team placing 6th at the 2018 World Championships as well as helped achieve a best world ranking of 6th overall.

“My sport aspirations of competing at the Olympics has always been the number one goal. Since I started fencing, I have always dreamed of competing with the world’s best on the biggest stage.  I was part of the qualification process for London 2012 and Rio 2016 and I feel Tokyo 2020 is my time!”

Life as an athlete and her road to the Olympics hasn’t always been clear skies and easy roads. Her journey was disrupted in 2011 when she tore her left knee ACL right before the Olympic qualification.

“I was able to complete the qualification period using a brace but was unable to qualify through individual and, as a team, we hadn’t had much experience together yet. For Rio, our team started to achieve best results for a Canadian women’s foil team but, unfortunately, the team event was not included in the Olympics for our discipline,” explained Shannon.

As they approach Tokyo 2020, the team is achieving stronger results, and their discipline is included for both individual and team at the Olympics. “It is our time!”

As a gay athlete, her team, coach and club have always been welcoming and embraced her as a gay woman. Internationally, however, and even amongst other members of the national fencing team (other disciplines) have made disrespectful comments and remarks.

“For me, the best way of dealing with these things is just to remain visible and approach the comments head on,” said Shannon. “Nobody should ever be made to feel less because of their sexuality and I think the more we confront rude comments and exclusion in sport, the more welcomed other queer people will feel.”

Shannon came out as a gay when she was 19. Her family has always taught love and inclusion. They have always gone to bat for her and have consistently, without fail, been her solid foundation. Although her coming out was no exception to her family’s inclusivity, she still had a world of homophobia and gender-based discrimination in front of her.

“Homophobia and heteronormativity are everywhere and they (her parents) couldn’t protect me from the world. I still struggled with being different. It took me a long time to feel comfortable identifying as gay but it’s the best thing I ever did for myself! Maybe it’s cliché but honestly one of the things I would go back and tell my 15-year-old self is first you’re gay and that’s why you feel so different than your friends and second, it gets better!” smiled Shannon. “My family life is amazing. I have an incredibly supportive wife and we have an amazing daughter whose love of life astounds me every day. I’d say, yea, the coming out part is hard, but trust me, the family part is all worth it.”

Shannon’s met her wife Meghan through mutual friends, and they have been together for five strong and healthy years. With farming, training for the Olympic Games, and family life, there’s no doubt that her schedule is busy, but it’s managed with continuous support from one another.

“Since welcoming our child Scarlett into the world, our lives have completely changed. Sleep is a distant memory. What used to take five minutes to leave the house now takes closer to an hour because putting on your coat and shoes is just about the worst thing a parent could ever ask of a child! In all seriousness though, having Scarlett is the best thing that ever happened to us.  We love tackling adventures as a trio and seeing the joy she has for trying new things.”

As an athlete, evidently, life has gotten more hectic.

“Taking those selfish moments to develop myself as an athlete is even more difficult than it was before.  But the drive to achieve my goals has almost been heightened.  It doesn’t just feel like it’s for myself anymore but for her as well.  I want her to grow up seeing her mom be committed, hard working and driven to achieve her goals.”

Not only does Shannon want to be a strong example for her daughter, she also wants to be visibly open and advocate to be the role model she never had in sport and that could have made an easier transition in her coming out.

“That is why the #OneTeam program is an amazing initiative. I think it is so important for there to be visible LGBT role models amongst the sporting community to push for inclusion in sport. I hope that by being visible, bringing my family with me to tournaments and sharing my story that other LGBT athletes in fencing or any sport can feel more comfortable and free to be themselves.”

Like a stone thrown in the water, the ripples go on and on. Visibility within the community has been the most important piece for Shannon. More specifically, she is the first #OneTeam ambassador from Saskatchewan. Being brave enough to take that step, talking about her journey and being authentic through it all is something she wishes to share with young athletes.

“At the 2018 Saskatoon Pride Parade, I worked with the #OneTeam crew to ensure we had a #OneTeam float visible in the parade. I drove the truck and had Meghan and Scarlett with me in the front seat waving throughout the parade.”

Up next for this busy athlete is to continue to lead this initiative, but also to focus on her competitive season. As family life will soon transition to two full-time working parents and with Olympic qualification period starting April 1st, 2019, her journey will continue with discipline, patience and hopefully a successful journey to Tokyo 2020.

“Life will be a juggling act but with family support, I know it’s something we can handle.”