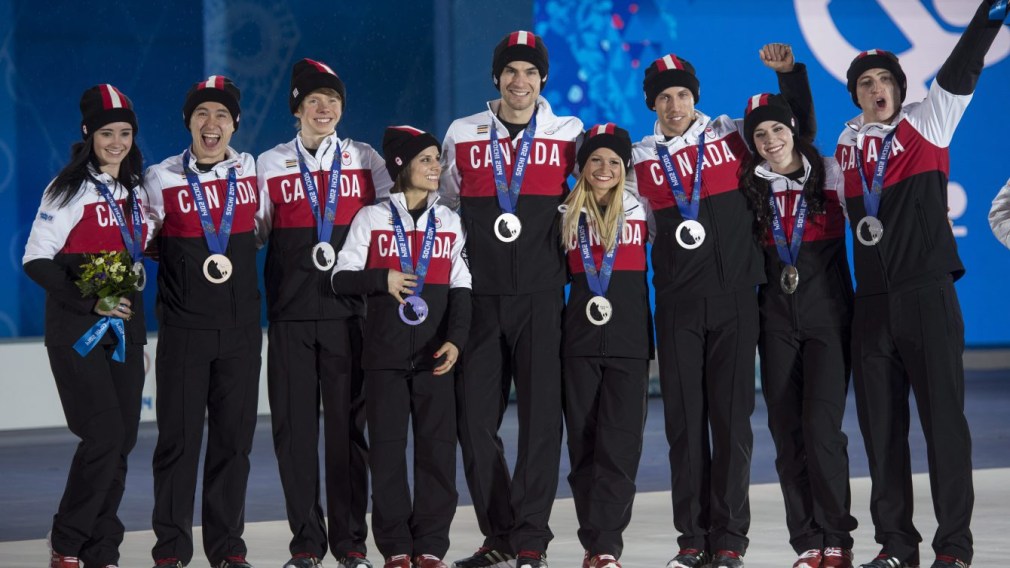 “Dylan is my best friend. We are different in some ways but similar in most. He was one of the first people I came out too.” – Eric Radford.

Eric Radford and Dylan Moscovitch first met when they were seventeen. Both respected Canadian pairs figure skaters, amongst the elite, crossed paths at the Toronto Cricket, Skating and Curling Club, where they were training at the time.

“I didn’t like Dylan when he first arrived. All the girls at the club liked this new guy and I was jealous he stole their attention away from me. We also had similar haircuts at the time and people would confuse us with one another,” said three-time Olympic medalist Radford.

“He was so skeptical about me at first, but I was nice to him and eventually he (Eric) stopped being stand-offish”, laughed the also highly decorated Moscovitch.

It’s funny to think how someone at first encounter can appear like they’ll never come close to becoming such a big part of your life and more specifically a friend. Friendship often needs a certain parallelism of life, a community of thought, and a rivalry of aim. For Radford and Moscovitch, skating was that mix as their rivalry was on the ice, but also where their friendship blossomed.

“I feel the way our careers and lives have been so connected is something very rare and special. How many stories are there where your best friend is also your archrival?” posed Radford.

Although their goals and aspirations as Olympic skaters completely intertwined, this was the start in which created a special bond over their sport.

“Our friendship developed because of our skating lives. Eric lived with my family for a time, so we were together a lot, from training all day, to hanging out at home. We went through a lot of highs and lows together,” said Moscovitch.

It was during this time that Eric came out to Dylan.

“We were seventeen and Eric was living with my family at the time. For about four months he told me he had a secret but that he’d tell me when he was forty, or he’d have to kill me if he told me before then,” chuckled Moscovitch. “For four months I nagged him, but I had a good idea of what it would be. It was a funny scene when he did tell me. He made me guess and he was nervous to say it, but I was also nervous that I’d guess wrong and offend him. In the end, it made our relationship grow closer as he was able to be comfortable being his authentic self and exploring what that meant. I tried my best to encourage and help him feel confident with the whole process; first with his level of comfort and confidence and then with telling his family and friends and being more public about it.”

Having a best friend that is on the same path as you and who understands the time and sacrifice it takes to get to where you want to go, is invaluable, especially for Radford. Even now, as both these athletes are in a major transition period (both recently retiring at age thirty-three) they are still there for one another, which makes a huge difference.

“I believe we are simply there for one another unconditionally. Every big decision I’ve made in my life and for so many big moments in my life, Dylan has been and will be a part of them. We give each other advice, celebrate the great times, and are there to support and weather the difficult times together,” Radford continued.

“Dylan was also a major part of me accepting myself and learning to be comfortable in my own skin. He was the first guy I wasn’t afraid to be myself in front of,” smiled Radford.

The #OneTeam initiative has also been able to influence LGBTQ athletes such as Radford and Moscovitch.

“It has made a huge difference for me not only in deciding to come out publicly but also in how I felt while I was at the Olympics in PyeongChang. I feel completely comfortable. It addresses the issues in sport that I faced when I was growing up.”

For Dylan, his journey as an ally began by helping Radford come out and discover himself by being supportive, encouraging and even defending him if need arose.

“I’m happy to say that I don’t have to act so much as an ally, more just as Eric’s friend. I think being an ally means that I’m a supporter and an advocate for equality and inclusion. I tell people Eric and my story, as well as many other friends stories, what their coming outs were like and what it means to support them. I don’t think I should even need to have a label, in my opinion it’s just called being a supportive and accepting person,” expressed Moscovitch.

Moscovitch and the #OneTeam initiative has enabled him “a platform to speak about being a supporter and to show how someone who isn’t directly affected by this type of prejudice can help change stereotypes and shift the norm to view all as equal.”

For all the big decisions, moments, struggles and triumphs, their relationship has been built on a sounding board of support, acceptance, and trust. Their friendship has stood the test of time, and more importantly competition and rivalry.

“As everything is changing so much, it’s comforting to know that our friendship is a constant. I’m proud to be an ally and proud that I played a role in Eric’s journey.”  – Dylan Moscovitch.