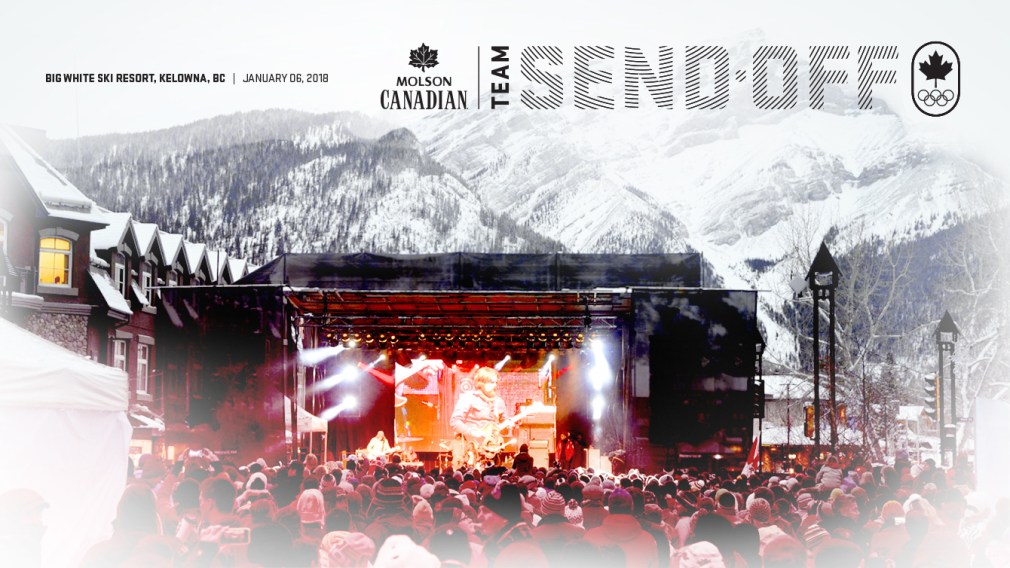 PyeongChang 2018 is quickly approaching and to celebrate, we’re sending off Team Canada athletes in style at the Molson Canadian Olympic Team Send-off.

With Canadian artists performing on the main stage, sport activations and Molson Canadian flowing, we’ve made sure there’s no shortage of excitement as we send-off Team Canada athletes on January 6th. The event will be hosted at Big White Ski Resort in Kelowna, British Columbia, and is free to the public.

Interested? Here’s what you need to know about the Molson Canadian Olympic Team Send-Off.

While many of the nation’s top winter athletes will be around the world booking their tickets to the Games, some PyeongChang 2018 hopefuls will be on-site so we can send them off in person. Fans will have the opportunity to interact with members of  Team Canada – including the newly announced PyeongChang 2018 curling team -during meet-and-greet sessions.

Here are a few of the athletes that will be in attendance:

In addition to catching a glimpse of the athletes looking to represent the nation this winter, fans will be treated to a show by Canadian alternative rock band July Talk. With hits like Picturing Love and Beck + Call, July Talk will help turn up the party in the evening.

Few things scream winter as much as a snowy ski slope, which makes Big White Ski Resort in Kelowna the perfect spot for the Molson Canadian Team Send-Off. Located just 60 minutes from Kelowna.

*This contest is currently closed, but fans can join the Canadian Olympic Club to stay up to date with the latest rewards.

Follow Team Canada’s social media platforms for more details about the Molson Canadian Olympic Send-Off, as we get closer to watching Canada take on PyeongChang 2018.