• Played with Canada’s Senior Women’s National Team in a five-game European exhibition tour in 2019
• Appeared in 25 games in 2019 season for Dafni Agiou Dimitriou in Greece, making it all the way to the Greek League Semifinals; averaged 15 points, 5.7 rebounds, and 1.2 assists per game and was named to the Eurobasket.com All-Greek League 3rd Team
• Helped Canada finish third at the 2010 FIBA Americas U18 Championship in Colorado; averaged 16.2 minutes, 9.6 points and 5.6 rebounds per game 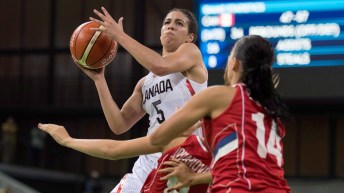