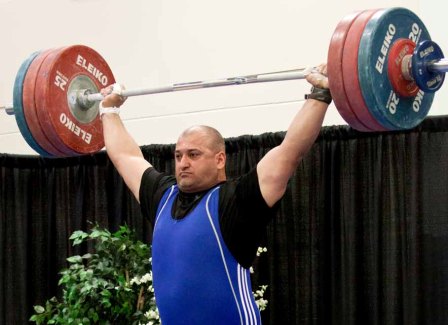 George Kobaladze competed at the 1999 and 2001 World Championships for his native Georgia before moving to Canada in 2003. Since then, he has been named Canada’s best male lifter five times. He won a bronze medal at the 2011 Pan Am Games in Guadalajara. At the 2014 Commonwealth Games in Glasgow, he set Games records in the clean and jerk (229kg) and total weight (400kg) to win the gold medal after taking bronze in 2010. Kobaladze is also a two-time silver medallist at the Pan American Champi0nships.

Family: Father Jimsher Kobaladze practiced weightlifting as a hobby and is his role model for his extraordinary strength and personality… Brother Levani and sister Etheri… Wife Natalia… Son Luca (born 2009)… Getting into the Sport: Started weightlifting at age 13, introduced to it by his father… Outside Interests: Enjoys playing ping pong with his son… Earned his Bachelor of Physical Education at the Sports Institute of Tbilisi… Odds and Ends: Favourite motto: “Hard work leads inevitably to success”…

Three-time Olympian Pierre St. Jean, one of Canada’s best-ever weightlifters, had a top finish of 10th in the light heavyweight…