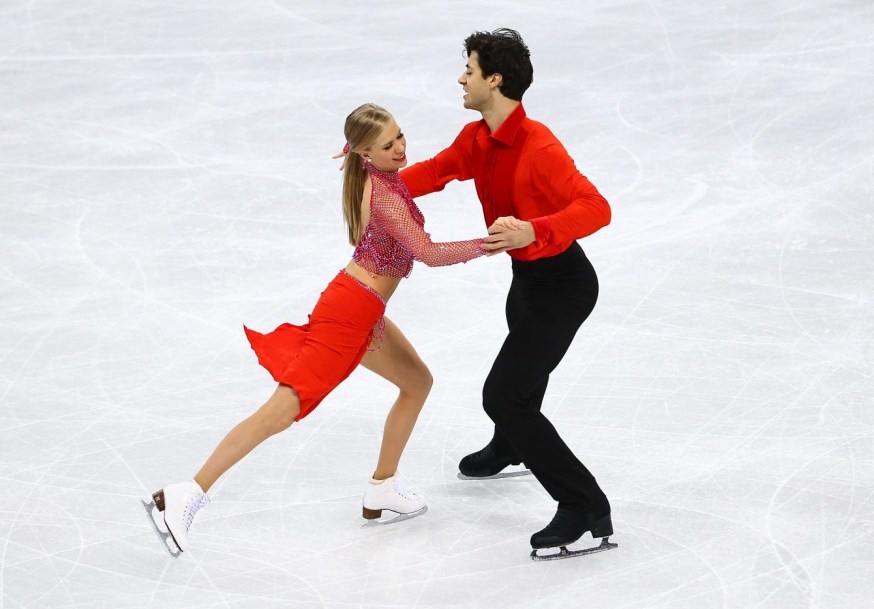 Kaitlyn Weaver and Andrew Poje are three-time world medallists in ice dance, winning silver in 2014 to go with bronzes in 2015 and 2018. At the former, they came within two one-hundredths of a point of claiming the world title. That came on the heels of a seventh-place finish in their Olympic debut at Sochi 2014. In 2014-15, they won every event they entered until the world championships.

Weaver and Poje began their partnership in August 2006, after they had competed against each other with previous partners. When they both became available at the same time, they had a tryout and found an immediate connection. Moving to Canada at age 17, American-born Weaver felt more at home than ever before. Just five months later they debuted at the Canadian championships where they won the bronze medal. They also won bronze at the 2007 World Junior Championships.

After competing at the 2007 and 2008 World Championships, they came up short of qualifying for the global event in 2009 and 2010. They also missed the Vancouver 2010 Olympic team by just three-tenths of a point. After Weaver was sworn in as a Canadian citizen in June 2009, they changed training locations to be in a more competitive environment. Working with coaches Pasquale Camerlengo and Angelika Krylova in the Detroit area, they became stronger technically.

Weaver returned to the ice in early February and they were able to compete in London, finishing an incredible fifth. Ahead of the 2016-17 season, Weaver and Poje began training with coach Nikolai Morozov, splitting their ice time between Hackensack, New Jersey and Moscow, Russia. Taking their skating in a new direction, they finished fourth at the 2017 World Championships, missing the podium by less than four-tenths of a point. Their return to the world championship podium in 2018 followed their seventh-place finish at PyeongChang 2018.

A little more about Kaitlyn

Getting into the Sport: Starting skating at age six when she received skates along with a skating skirt and sweater for Christmas… Went to the rink on Boxing Day and loved it immediately… Has always been an ice dancer because she wasn’t a strong jumper… Outside Interests: Enjoys ballet, yoga, writing and learning foreign languages… Working towards a Bachelor of Arts at the University of Waterloo… Co-founded the charity Skate to Great to help give all Canadian children the opportunity to get on the ice… Right to Play ambassador… Odds and Ends: Says the book The Alchemist changed her life, telling her it’s okay to follow her dreams and let go of results… Favourite Olympic memory is watching Shae-Lynn Bourne and Victor Kraatz compete at Salt Lake City 2002… Has wanted to be an Olympian since her first time on the ice because it is the highest level possible… Also inspired by Tara Lipinski at Nagano 1998… Sometimes called “Katush” by her coaches, which is a Russian nickname for Katya… Collects keychains during her travels… Favourite quote: “Just when the caterpillar thought the world was over, it became a butterfly.”