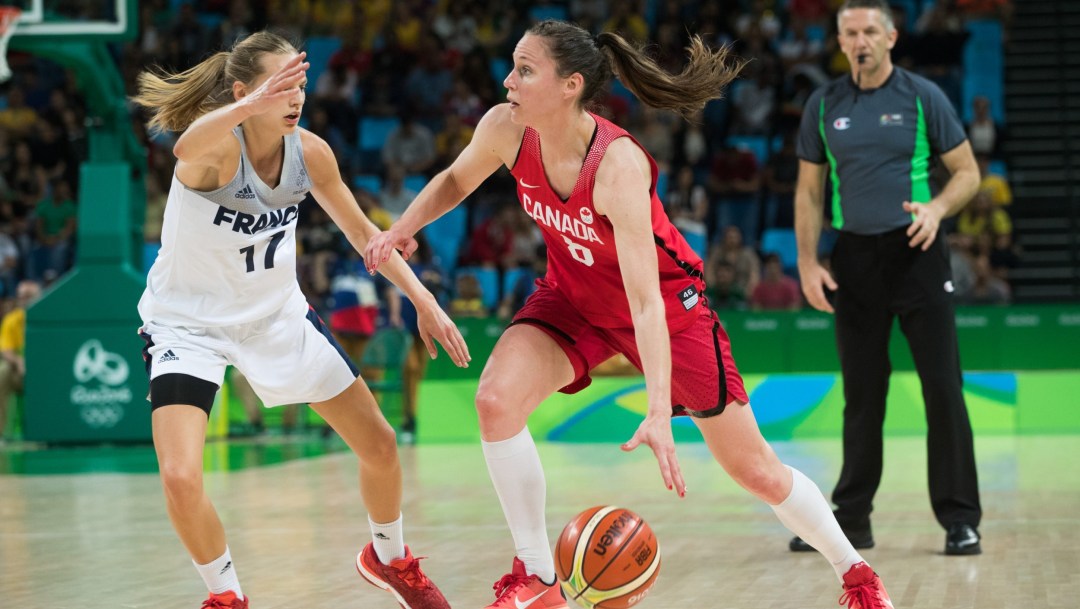 Kim Gaucher has been playing with the senior women’s national team since 2001. Her career highlight came over a decade later when she helped them qualify for London 2012, the first Olympic tournament for the Canadian women since 2000. In six games played in her Olympic debut, Gaucher led the team with 13.8 points per game and a 57.7 field goal percentage.

Her other multi-sport Games experience includes the 2003 Pan Am Games as well as the 2015 Pan Am Games where Gaucher led the team with 27 rebounds and contributed 7.4 points per game as Canada won gold. She was also amongst the team leaders with 33 rebounds at the 2015 FIBA Americas Championship where Canada won gold to qualify for Rio 2016. While in Rio, Gaucher played her 200th game for Team Canada. She averaged 7.5 points and 6 rebounds in 25.3 minutes per game in her second Olympic appearance.

Gaucher next suited up for the national team in 2018. At the FIBA World Cup, she contributed a total of 29 points and 15 assists as Canada finished seventh. That was her fourth appearance at what was previously called the FIBA World Championships. In 2014, she had led the team in total points (62) and the Canadian women finished fifth for their best result since 1986.

In 2019, she was part of Canada’s runner-up finish at the FIBA AmeriCup and helped Canada advance to the final phase of Olympic qualification. In February 2020, she averaged 16.2 minutes as Canada went 3-0 to book their berth at Tokyo 2020. She served as team captain in her third Olympic appearance.

Gaucher played collegiately at Utah where she was recognized as an Honorable Mention WBCA All-American in each of her four seasons. She was also a CoSIDA Academic All-American and named Mountain-West Conference player of the year four consecutive times. Gaucher finished as the highest scorer in Utah history with 2281 points and was honoured as the first female athlete to have her jersey retired by the university.

A Little More About Kim

Getting into the Sport: Started playing at 6 because she would follow her sister Michelle to the gym… Knew she wanted to play for Canada since attending an open practice for the senior women’s national team in grade 9… Outside Interests: Graduated from University of Utah in 2006 (Bachelor of Science in Communications)… Stayed involved as Director of Community Relations for the Utes women’s basketball team… Enjoys reading, watching new TV series with the team, snowshoeing, skiing and being outside… Odds and Ends: Favourite motto: “It’s the little things that make the big things happen”…