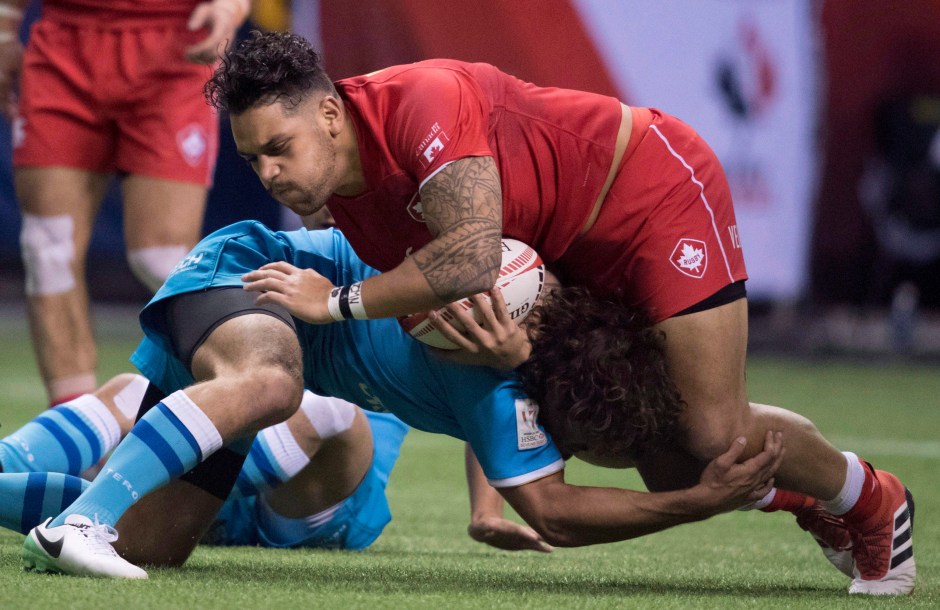 Mike Fuailefau debuted for the Canadian sevens team at the beginning of the 2013 Sevens Series in Gold Coast and scored his first try in Tokyo. Later that year he was selected to the World Cup Sevens roster, where he started all six games and scored one try, helping Canada finish ninth and become Plate Champions.

In 2014 he competed in three Sevens Series stops, helping Canada finish a best-ever sixth in the overall standings. He made his first appearance at the Commonwealth Games, starting all six games and finishing ninth. He was part of the repeat ninth-place finish at the 2018 Commonwealth Games.

Fuailefau had his breakthrough year in 2015, competing at each stop on tour and even being named to the Tokyo Sevens Dream Team. He was a member of the Canadian team that missed out on an automatic berth for rugby sevens’ Olympic debut, losing to Team USA in the RAN Sevens final. He scored three tries at the last chance qualifier for Rio 2016, but unfortunately Canada did not earn a spot at the Olympic Games.

In 2017, Fuailefau led Canada with 55 matches played in the Sevens Series. He scored a team high five tries during their Cup-winning performance at the Singapore Sevens Cup, Canada’s first ever tournament win. The win helped Canada get back into the top-eight in season standings for the first time since 2014 and secured their berth at the 2018 World Cup.

In 2020 he helped Canada win bronze at the Canada Sevens Series in Vancouver, their best-ever finish on home soil. At the end of the 2020 season, Fuailefau sat fourth in matches played and ninth in tries all-time for Canada in the Sevens Series.

Fuailefau was a member of the RAN Sevens-winning team in 2019 which secured Canada’s spot at Tokyo 2020. In his Olympic debut, Fuailefau played in five games as Canada advanced to the quarterfinals.

Getting into the Sport: Started playing rugby at age 10… Says he could have been a rock star but his dad made him play rugby… His dad, Iosefa, was an inside centre for Samoa’s national team… Outside Interests: Enjoys spending downtime with family and friends… Odds and Ends: Nicknames include Slither, Babe, Johngo, Phat Paulie… Prepares for games by listening to slow jazz on repeat…

Hammond represented Canada at the 2014 and 2018 Commonwealth Games, finishing ninth both times. In between he also competed at…

Justin Douglas made his World Rugby Sevens Series debut on the Gold Coast of Australia in October 2012, at just...