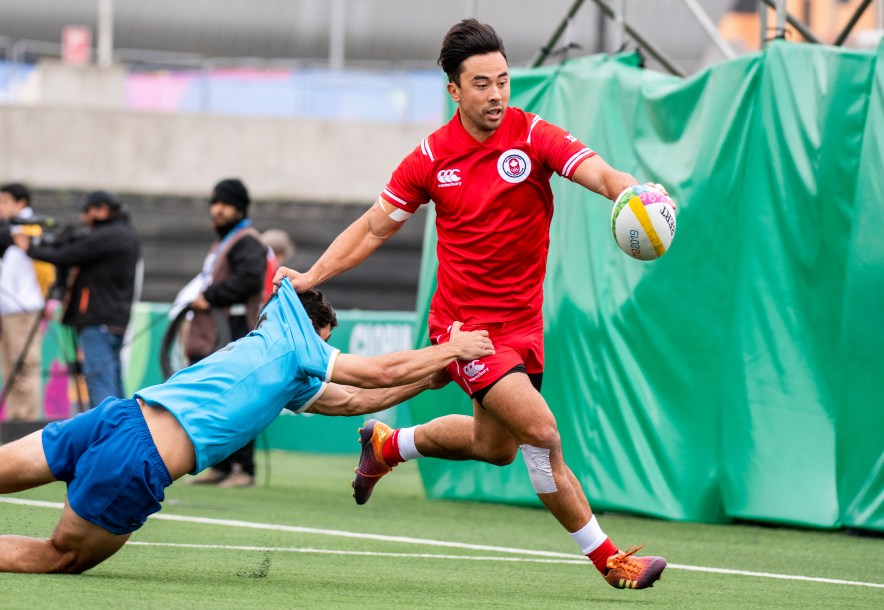 Nathan Hirayama has been a mainstay for Canada Sevens since making his debut in 2006 at the age of 18. Since then he has built a global reputation as one the top playmakers in the game as his cool persona and style on the field lulls defenses into feeling they have him in check before he either breaks the line or creates for others.

Hirayama is Canada’s greatest points scorer in rugby sevens. At the end of the 2020 season he sat third all-time in the World Rugby Sevens Series scoring with 1859 points and leads Canada in tries (147) and matches played (363).

For more than a decade Hirayama has been a core member of the Canadian Sevens teams at some of the biggest stages. He has competed in three Commonwealth Games and all three Pan American Games to include rugby sevens, where has won two gold and one silver.

In 2015, Hirayama and the Canadian team missed out on an automatic berth for rugby sevens’ Olympic debut, losing to Team USA in the RAN Sevens final. They had one last chance the following year but fell two games short in the final qualification tournament.

In 2017, Hirayama became the first Canadian to pass 1000 career Sevens Series points. At the eighth stop of the season, the Singapore Sevens, he led Canada to their first ever tournament win, being named the Player of the Final as Canada beat Team USA 26-19. The win helped Canada finish eight in the 2016-17 Sevens Series and qualified them for the 2018 World Cup Sevens in San Francisco. He had previously represented Canada at the 2013 World Cup Sevens. In the summer of 2019, he helped Canada qualify for Tokyo 2020 by winning the RAN Sevens in the Cayman Islands.

Ahead of his Olympic debut, Hirayama was selected as Team Canada’s flag bearer for the Tokyo 2020 Opening Ceremony alongside basketball veteran Miranda Ayim. He ended up as the team’s second-leading scorer with 19 points on one try and seven conversions in 10 attempts as Canada advanced to the quarterfinals.

Hirayama was third in Sevens Series scoring when the season was cut short in 2020. At the last event before the pandemic-caused shut down, the Canadian team had their best finish since 2017 and best result ever on home soil, placing third in Vancouver. Hirayama was the leading scorer of the tournament and named to the Dream Team.

Hirayama has also featured for Canada’s Union team and was the youngest player ever to earn their first senior cap when he stepped on against New Zealand in 2007. He has since earned 23 caps and was a member of the Canadian teams at the Rugby World Cup in 2007, 2011, and 2015. After not playing at all in 2007, and being a substitute for 2011, he started all four games in 2015, scoring 20 points.

A Little More About Nate

Getting into the sport: Started playing rugby at age 14… He and his friends all decided to join the grade eight rugby team at Hugh McRoberts Secondary High School… Outside Interests: Enjoys fishing and golf… Earned a degree in education… Would like to pursue a career as a firefighter… Odds and Ends: Nickname is Spicy Nate… Likes to get out for a walk and fresh air before a game… Father, Garry, was a member of the Canadian National Rugby Teams…