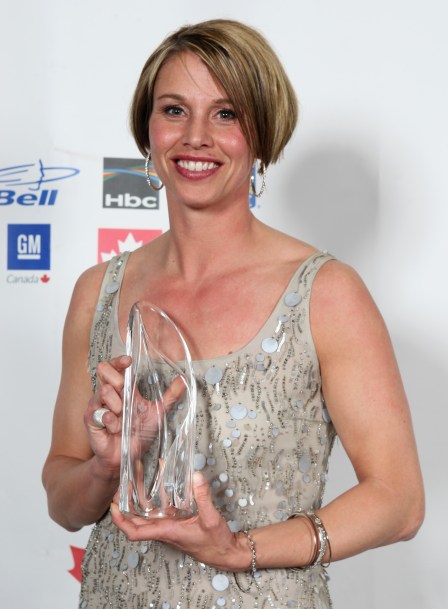 Three-time Olympic speed skating medallist Catriona Le May Doan and the 1948 RCAF Flyers, gold medallists in hockey, head a list of six inductees who will be enshrined this evening in the Canadian Olympic Hall of Fame. Hosted by television broadcaster Scott Russell, the 2008 Canadian Olympic Hall of Fame Gala Dinner & Induction Ceremony, presented by General Motors of Canada Limited, is scheduled to take place at the Calgary Stampede/Roundup Centre in Calgary, beginning at 5:30 p.m.

Le May Doan and 1992 race walking silver medallist Guillaume Leblanc will be enshrined in the athlete category. The 1948 RCAF Flyers will be inducted in the team category while Danièle Sauvageau, who guided the women’s hockey team to its first gold medal at the Salt Lake City 2002 Olympic Winter Games, will be inducted into the coach category. Frank King and Bill Warren, who led Calgary’s successful bid for the 1988 Olympic Winter Games, will enter the Hall as builders.

During the Hall of Fame induction ceremony, the COC will also present 1948 Olympic gold medallist figure skater Barbara Ann Scott with the Canadian Olympic Order. The award recognizes individuals who have made the Olympic Movement their life’s work and have served it with distinction.

In addition, the Canadian Olympic Committee will also pay tribute to RBC in recognition of their outstanding commitment to the Olympic Movement in Canada. RBC is the COC’s longest standing private sector partner, a relationship which began 60 years ago with their support of the RCAF Flyers for the St. Moritz 1948 Olympic Winter Games.

The Gala Dinner & Induction Ceremony is part of the Canadian Olympic Committee’s 2008 Hall of Fame Induction Weekend, which is celebrating the 20-year legacy of the Calgary 1988 Olympic Winter Games.

The Canadian Olympic Hall of Fame recognizes those who have served the cause of the Olympic Movement with distinction. The 2008 inductees are:

Catriona Le May Doan (athlete, Saskatoon, Sask.) is a four-time Olympian in speed skater, and the first Canadian athlete to defend an individual gold medal, winning the 500 m event at both the 1998 and 2002 Olympic Winter Games. She was a bronze medallist as well in 1998 for the 1,000 m event, and carried the Canadian flag into the Salt Lake City opening ceremony four years later. Le May Doan, a five-time world champion in the 500 m, was the first woman to break the 38-second barrier in the event and still holds the Canadian record. She was Canada’s Athlete of the Year on three occasions and in 2005 was inducted into Canada’s Sports Hall of Fame and awarded the Order of Canada. Le May Doan has honourary degrees from the University of Calgary, University of Regina and the University of Saskatchewan.

Guillaume Leblanc (athlete, Sept-Iles, Que.) is a three-time Olympian and silver medallist in the 20 km race walk. Finishing fourth in Los Angeles in 1984 and 10th in Seoul in 1988, Leblanc captured silver in Barcelona in 1992 – Canada’s best-ever race walking result. He also won gold at the Jeux de la Francophonie in 1989 and at the 1990 Commonwealth Games. In 1990, he also held the world record in the 30 km walk.

The RCAF Flyers (team category, men’s hockey) were not expected to fare well at the 1948 Olympic Winter Games in St. Moritz, Switzerland. Revised rules on amateur status forced the last-minute creation of this squad, comprised of 17 Air Force and ex-Air Force players. Yet at only the fifth Olympic Winter Games ever, the Flyers reeled off six straight victories before registering a scoreless tie with heavily-favoured Czechoslovakia. In their final game against the host Swiss team, a win by two or more goals ensured the team a gold medal. In a hostile environment, the Flyers rode 22-year-old goaltender Murray Dowey to a 3-0 shutout win. Dowey, who is one of the six members attending the induction ceremony, finished the tournament with five shutouts in eight games. The team was inducted into the Canadian Forces Sports Hall of Fame in 1971 and the rink at the Canadian Forces Base in Trenton, Ont. is named the “RCAF Flyers Arena.” Dowey will be joined by players Roy Forbes, Andy Gilpin, Ted Hibberd, André Laperrière and Ab Renaud at the ceremony.

Danièle Sauvageau (coach, Deux-Montagnes, Que.) was head coach and general manager of the Canadian national women’s hockey team when it won gold at the 2002 Olympic Winter Games. Sauvageau was assistant coach at the previous Games in Nagano where the team captured silver. She also guided the team to two world championship gold medals in 1999 and 2001. She was named coach of the year in 1999 by the Coaching Association of Canada and by the Gala Sports Québec in 1995, 2000 and 2002. The Montreal YMCA named her woman of the year in 2000 and Saint Mary’s University bestowed her with an honourary doctorate in 2002. The 22-year police veteran was the first woman to coach in the Quebec Major Junior Hockey League when she joined the Montreal Rocket in 1999.

Frank King (builder, Redcliff, Alta.) helped lead the bid for the Calgary 1988 Olympic Winter Games. He also played a key role in the development of sport in Western Canada through the restructured Calgary Olympic Development Association (CODA). As chairman of CODA, King was instrumental in preparing the bid for the 1988 Olympic Winter Games. King went on to become chairman and CEO of OCO ’88, the Calgary Olympic Organizing Committee. He was also co-president of “Canada 125,” Canada’s 125th birthday celebration. King has received numerous awards and accolades for his work with the Calgary Games and for his service to the community over his lifetime. Most notably, he received the highest award presented by the IOC – the Olympic Order in Gold. King is an Officer of the Order of Canada, a member of the Alberta Sports Hall of Fame, the 2003 Calgary Sportsman of the Year and recipient of the Queen Elizabeth II Golden Jubilee Medal and an Honorary Doctor of Laws from the University of Calgary.

Bill Warren (builder, Lacomb, Alta.) also helped lead the bid for the Calgary 1988 Olympic Winter Games, as well as restructuring the Calgary Olympic Development Association (CODA). Among his many titles, Warren was a member of the executive board of OCO ’88 (the Calgary Olympic Organizing Committee), chair of CODA from 1986 to 1988, vice president of Bobsleigh Canada (1988-94, 2007 to present), chancellor of the University of Calgary from 2002 to 2006, chef de mission for the Canadian team at the Lillehammer 1994 Olympic Winter Games, and president of the Canadian Olympic Association from 1994 to 2001. For his dedication to sport and its development across the country, Warren has been awarded both the Order of Canada and Olympic Order in 2002, and the Queen Elizabeth II Golden Jubilee Medal in 2003. He was named Calgary Sportsman of the Year in 2001.

Barbara Ann Scott (Canadian Olympic Order, Ottawa) was Canada’s first gold medal-winning figure skater at the 1948 Olympic Winter Games. Her athletic career started early, when she won the Canadian national junior title at the age of 11. Two years later she became the first woman ever to land a double Lutz in competition. Scott was named the country’s top athlete in 1945, 1947 and 1948. She is a member of the Canadian Olympic Hall of Fame, Canada’s Sports Hall of Fame, the World Figure Skating Hall of Fame and the Canadian Figure Skating Hall of Fame. In 1991, she was awarded the Order of Canada and in 1998 she was named to Canada’s Walk of Fame.