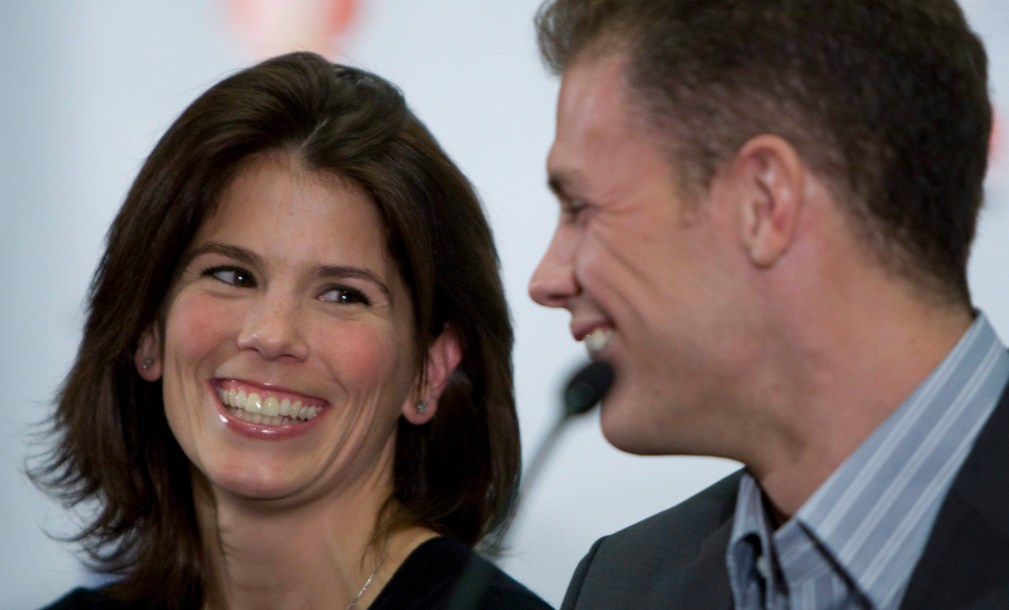 Heading a list of five inductees are Jamie Salé and David Pelletier, pairs figure skaters whose passionate performance in 2002 earned them a gold medal and a spot in Canadian sports lore, and the 2002 men’s and women’s hockey teams who overcame the pressure of history to both capture gold.

“Having our lifelong dream come true of making the Olympic team and coming home with a gold medal was extremely special and rewarding for both of us,” said Salé. “Making it into the Canadian Olympic Hall of Fame is a great honour and we feel very fortunate to have been nominated. It is always extraordinary to be put in a class with so many fantastic athletes who have worked so hard and dedicated a part of their lives to accomplish their goals.”

Inducted into the 2009 Canadian Olympic Hall of Fame as a coach is Howard Firby, who over three decades coached many of Canada’s top swimmers including triple medallist Elaine Tanner. Dr. Robert Hindmarch, who has left a lasting legacy in amateur hockey across Canada, will be inducted as a builder. The ceremony will take place at the Westin Bayshore in Vancouver beginning at 5:30 p.m.

The Canadian Olympic Order will be awarded to Dr. Jean Grenier, who is a member of multiple Halls of Fame for his dedication to the sport of speed skating in Canada. A past president of Speed Skating Canada and COC executive member, Dr. Grenier was Canada’s Chef de Mission for the country’s first home Winter Games – Calgary, 1988. The Canadian Olympic Order recognizes individuals who have made the Olympic Movement their life’s work and have served it with distinction.

The 2009 Canadian Olympic Hall of Fame Induction Weekend also features the COC’s 2009 Quadrennial Elections, Executive Committee and Session meetings where it will vote for a new president-elect and board of directors. Also taking place is the Petro-Canada Community Outreach Program, a keynote speaker luncheon with ultramarathon runner Ray Zahab, and a special behind-the-scenes interactive tour of the Richmond Oval. Juno Award-winning and multi-platinum Canadian artist Chantal Kreviazuk will perform live at the 2009 Hall of Fame Gala Dinner and Induction Ceremony.

The Canadian Olympic Hall of Fame recognizes those who have served the cause of the Olympic Movement with distinction. The 2009 inductees are:

Jamie Salé and David Pelletier: They formed a figure skating pairs team in 1998 and in short order became both World and Olympic champions. Fourth at the 2000 World Championships, Pelletier and Salé captured the world title in 2001 – Canada’s first pairs to do so since 1993. For this, they were named 2001 Canada’s athlete(s) of the year, winners of the Lou Marsh Trophy. Their performance at the Salt Lake City 2002 Olympic Winter Games is etched in sports lore. To the cinematic theme of “Love Story,” Pelletier and Salé skated an essentially flawless free program in the final that appeared to have won them the gold medal. But their final scores earned the pair a silver medal, behind the Russians. Several days later, it was revealed that a judge from France had voted for the Russian pair as part of a vote-swapping plan. Amid huge controversy, the International Skating Union announced that Pelletier and Salé would be awarded the gold medal, sharing first place with the Russians.

2002 Canadian Women’s Olympic Hockey Team: After winning silver in 1998, the women’s Olympic hockey team earned a rematch with Team USA in 2002 – and in a 3-2 victory claimed its first gold medal. Coached by Danièle Sauvageau (inducted last year to the Canadian Olympic Hall of Fame), Team Canada first had to come from behind against Finland in the semifinal. Team USA had won eight pre-tournament games against Team Canada by a combined score of 31-13. Despite a penalty ratio of 13-4 in favour of Team USA, the Canadians captured gold on the strength of goaltender Kim St. Pierre and goals by Caroline Ouellette, Jayna Hefford and tournament MVP Hayley Wickenheiser. Danielle Goyette tied Wickenheiser in leading the tournament with 10 points.

2002 Canadian Men’s Olympic Hockey Team: Constructed by Wayne Gretzky and led by the stellar goaltending of Martin Brodeur, Team Canada defeated Team USA for its first gold medal since 1952. An audience of 10 million on CBC made it the most-watched Canadian TV program ever. In that decisive game, Canada’s Joe Sakic and Jarome Iginla both scored two goals on USA goalie Mike Richter, who had stymied Canada six years earlier in the World Cup of Hockey. The gold medal game was Brodeur’s fifth in the tournament, a span during which he never lost and posted a 1.80 goals-against-average in stopping 100 of 109 shots. Over the tournament, Sakic notched seven points while Mario Lemieux and Steve Yzerman had six points each.

Howard Firby (coach, swimming): Firby applied the study of kinetics and anatomy to Canada’s swim team, for which he is one of the country’s most successful coaches. Firby helped found the Canadian Dolphin Swim Club in 1956, a dominant club in the 1960s. At the 1960 Olympic Games in Rome, most women’s swim team members hailed from Firby’s Dolphin Swim Club. Head coach of the 1964 Olympic swim team, Firby was also coach for such Canadian swim greats as three-time Olympic medallist Elaine Tanner and Mary Stewart, who set two world records in butterfly in 1962. The author of “Howard Firby on Swimming” (1975) is a member of Canada’s Sports Hall of Fame and the International Swimming Hall of Fame. He died in 1991 in Vancouver.

Dr. Robert Hindmarch (builder, hockey): In 1964, Dr. Hindmarch was general manager and assistant coach of Canada’s Olympic hockey team, made of amateur players enrolled at the University of British Columbia (UBC). Dr. Hindmarch was vice president of the Canadian Olympic Association, is a life member of the COC, and was Chef de Mission for the Sarajevo 1984 Olympic Winter Games. He is long linked to UBC, where he coached the hockey team to 11 of 12 winning seasons in the 1960s and 70s. He made significant contributions to hockey in Canada, working with many of the country’s amateur hockey associations, and writing publications on coaching techniques and instruction.

Dr. Jean Grenier (Canadian Olympic Order, speed skating): A member of the Canadian Olympic Hall of Fame and Canada’s Sports Hall of Fame, Dr. Grenier was Canada’s Chef de Mission for the Calgary 1988 Olympic Winter Games and Assistant Chef four years earlier. Dr. Grenier was a dedicated sports administrator for speed skating, founding the Quebec Speed Skating Federation in 1970, and becoming an executive member of the Canadian Speed Skating Association in 1972 and its president in 1976. His greatest contribution was to short track speed skating, for which he built a technical committee within the International Skating Union where none had existed before. Dr. Grenier’s 20-year focus on short track culminated in the sport being included as a demonstration sport in Calgary and then a medal sport in 1992. The International Olympic Committee awarded him the Olympic Order in 1998.