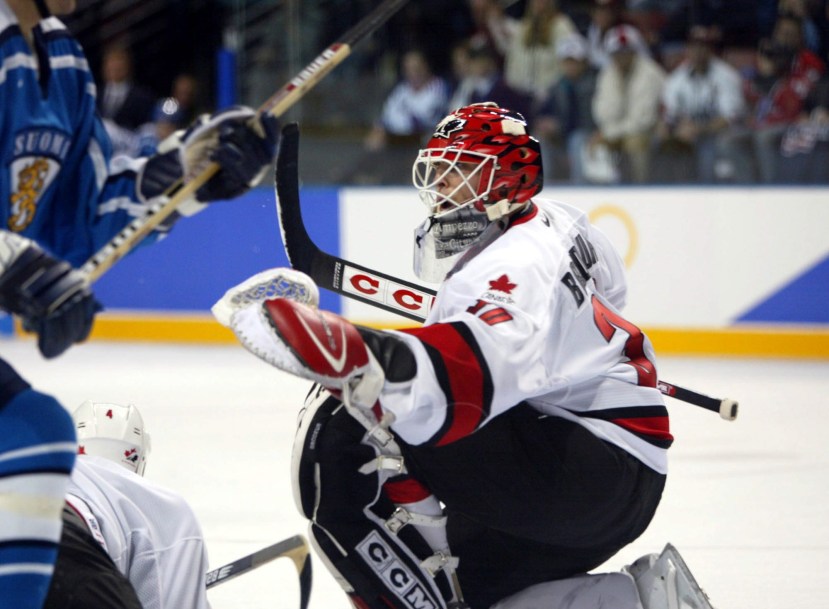 Denis and Martin Brodeur: Quite the Father-Son Pair

Canada’s hockey history is filled with great family legacies from the Orrs to the Sutters. For goaltending, there is perhaps no greater family legacy than that of the Brodeurs.

Denis Brodeur and his son Martin Brodeur are both Olympians. And both have brought home a medal wearing Team Canada colours. In fact, they are the only father and son goaltending due to both reach the Olympic.

Denis is a bronze medallist from the 1956 Olympic Winter Games in Cortina d’Ampezzo, Italy. Martin, meanwhile, captured gold memorably at the 2002 Salt Lake City Games and is now looking to replicate that victory on home-ice next month in Vancouver.

Their Olympic experiences have been starkly different. For instance, Denis competed on an outdoor rink, without a mask, against the world’s top amateur players. When Martin won gold, he played in a tournament of 14 nations that featured NHL superstars. Martin also backstopped Team Canada at the 1998 and 2006 Olympic Winter Games.

For both father and son, the Olympic Games are a source of great pride and memories. Martin honoured his father in Salt Lake by having “Salt Lake 2002” and “Cortina 1956” engraved on his mask.

Denis didn’t push Martin to follow in his footsteps and become a goaltender. Quite the opposite: in Martin’s early playing days, he was quite the prolific scorer.

Their goaltending styles differ greatly. Whereas Martin is a big, strong right-hander, Denis was a somewhat small left-hander. Denis played in an era that did not have the goaltender equipment and padding that exists today. In fact, by the end of his goaltending career, Denis had amassed a total of 118 stitches to his face and skull.

In order to compete in Cortina d’Ampuzzo, Denis declined a contract with the Cleveland Barons of the American Hockey League, which included a $3,000 signing bonus and could have materialized into an NHL contract.

Denis went on to become one of hockey’s finest photographers with the Montreal Canadiens. In 1996, he published a book entitled Goalies: Guardians of the Net. Also that year, the NHL acquired more than 110,000 of his images spanning four decades.

He is often rink-side at his son’s games capturing every record save.

With his continued dominant performances and leadership with the New Jersey Devils, Martin has shown no sign of slowing down as he continues to set the bar higher for tomorrow’s goaltenders. He appears to be a leading candidate for Olympic starter in Vancouver based on his sparkling play in the current NHL season.

In Vancouver, he will be joined by Marc-André Fleury (Pittsburgh Penguins) and Roberto Luongo (Vancouver Canucks).

Martin Brodeur is a four-time Olympian and two-time Olympic gold medallist, having been part of the victorious Canadian teams at…

Carey Price’s standout moment in a maple leaf uniform came at the 2007 IIHF World Junior Championship when he backstopped...