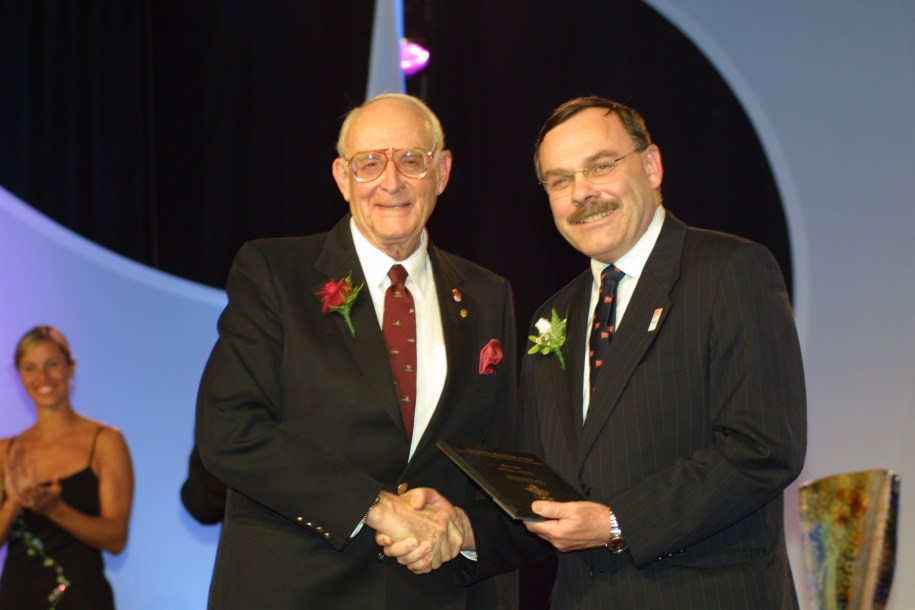 In 2003, the Canadian Olympic Hall of Fame welcomed Ken Lane, whose canoeing career memorably includes an Olympic medal. He represented Canada at multiple Olympic and Pan American Games as athlete, team manager and official. While an excellent paddler over the course of 60 years, Ken was also a visionary and helped lay the foundation for future Canadian success in the sport.

Ken passed away on Jan. 22, 2010 after a lengthy battle with leukemia. He will be greatly missed by the Canadian Olympic Team, and deep condolences to his wife, Madge, daughters Christine, Laurel, Robin and Lisa, and his many grandchildren.

Here is Ken’s biography from the program of the 2003 Olympic Hall of Fame Induction Ceremony:

“Ken Lane has been involved in the sport of canoeing as an athlete, official and administrator since 1937. Ken and his partner Don Hawgood won the silver medal in a photo finish with France in the 10,000 m C-2 event at the 1952 Olympic Games in Helsinki, Finland. This was the first Canadian medal at these Games.

Ken’s career as an athlete spanned six decades and he retired in the early ‘90s after his fifth Canadian Championship in the 60+ age category. Ken also played squash and won many Canadian Championships in his age group. Ken has been a role model to many as he combined his involvement as an athlete with an extensive volunteer involvement in the sport of canoeing. Ken served the Canadian Canoe Association as Vice Commodore and Commodore.

He was the manager of the Canadian canoe team at the 1967 Pan Am Games and the canoe and white water team at the 1972 Olympic Games in Munich. Ken was one of the earliest officials in North America to be accredited internationally and he subsequently officiated at the 1976 Olympic Games in Montreal. He was one of the founders of Canoe Ontario and was its first President. Ken was the treasurer of the Western Ontario Division of the Canadian Canoe Association for 55 years.”

Canoe sprint specialist, Canada’s Doug Bennett won a silver medal in the C1-1000m at the 1948 Olympic Games in London.