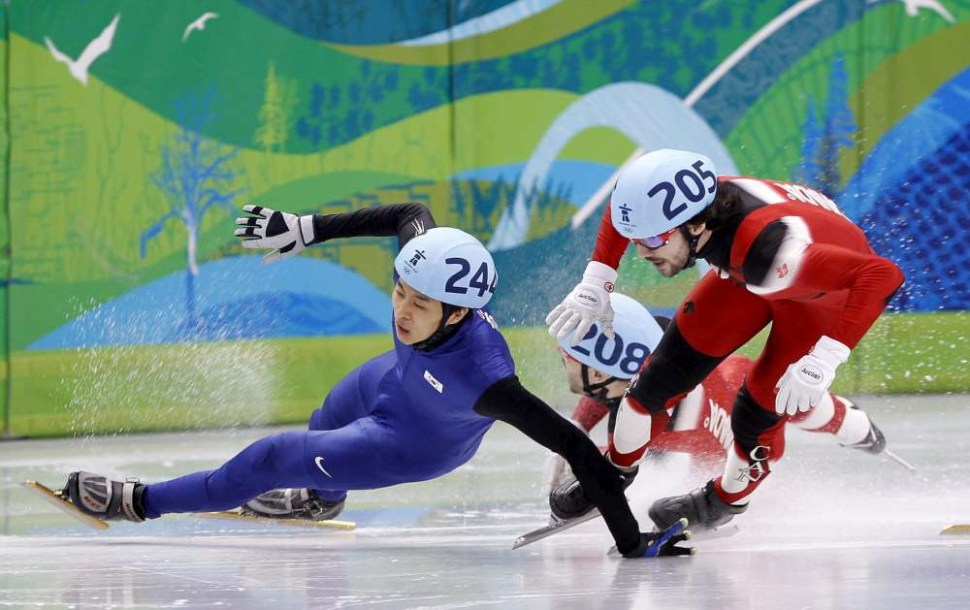 Charles Hamelin might remember his first Olympic gold medal as the one he captured while turning backwards. Last night the 500-metre world champion in short track became Olympic champion at Pacific Coliseum. It was just the first gold medal of his night.

In that 500-metre final, Hamelin got out fast, stayed out in front and survived a crash in the final turn to literally twist over the finish line in first spot. The two-time world champion in this race had, in a moment of
François-Louis Tremblay who won bronze after it was ruled that American Apollo Ohno caused Tremblay to crash at the very end. Tremblay is now a three-time Olympian and four-time medallist – a silver medallist in the 500 metres back in Turin.

That dramatic double medal performance set the stage for the thrilling 5,000-metre men’s relay event. We all know what happened over that six minutes and 44 seconds. Canada overtook China with nearly 20 laps remaining, powering lap after confident lap to win the second short track gold medal of the night. Just like that, Canadian short track skaters were on top of the world.

Those skaters are Charles Hamelin, his brother François Hamelin, Tremblay, Olivier Jean and Guillaume Bastille (who had skated in the semifinal). For François Hamelin, Jean and Bastille, it is the first Olympic medal of their careers. The performance matched Canada’s relay gold medals of 1998 and 2002.

The intense night of short track catapulted Canada to 10 gold medals at these Games, the most by any country. This is three more than Canada has ever won at a winter Games, and ties Norway (1994) and the U.S. (2002) for the most gold ever won by an Olympic Winter Host Nation.