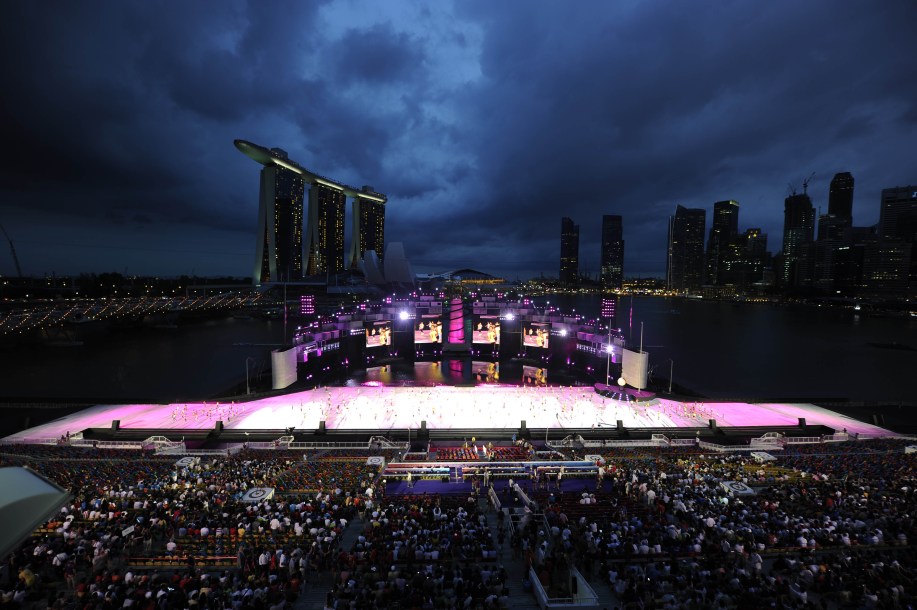 The inaugural Youth Olympic Games have officially opened. Singapore had its coming-out party at Saturday night’s opening ceremony, culminating in the lighting of the Olympic flame in a giant lighthouse in Marina Bay.

Victoria swimmer Jeremy Bagshaw, 18, proudly carried the maple leaf into the proceedings at The Float at Marina Bay. Bagshaw, who was born in Singapore, was greeted by a fantastic ovation, led by several members of his extended family.

“I was excited and a little nervous walking in front of so many people,” Bagshaw said afterward. “I was really happy and now I’m excited to get the Games started and begin competing.”

IOC President Jacques Rogge, integral in the conception and creation of the Youth Olympic Games, marked the historic nature of the event.

“Tonight, we open a new chapter in the history of the Olympic Movement.” said Rogge.

The Opening Ceremony Games organizers drew on Eastern and Western imagery and tied the similarities between the country of Singapore and a Youth Olympian, in terms of their struggles, their hopes and their dreams. The Games in general will promote the values of excellence, friendship and respect and Saturday night was the first piece of that puzzle.

“Everyone’”, the official song of Singapore 2010, was performed by five singers from five different continents.

The Canadian Youth Olympic Team left the ceremony ecstatic about the evening’s entertainment and excited about the next two weeks.

“My favourite was when they brought in the flame and passed it from person to person,” said Katelyn Hayward, a 15-year-old runner who will compete in the 2,000-metre steeplechase. “The whole ceremony is just something you know you’re going to remember for a long time.”

The highlight for Richmond Hill gymnast Mariah Madigan, 16, was the Canadian flag reaching the stage. “We were waiting and trying to see if ours was next,” said Madigan. “When it came up we all jumped up and started cheering.”

The Canadian Youth Olympic Team now embarks on a 12-day journey where the young athletes will participate in an extensive culture and education program running concurrently with Olympic competition.

Visit our website for a selection of photos: www.olympic.ca/en/games/youth-olympic-games/2010-singapore/photos.

Since he joined the Island Swimming club as a child, Jeremy Bagshaw has looked up training mate and two-time Olympic...