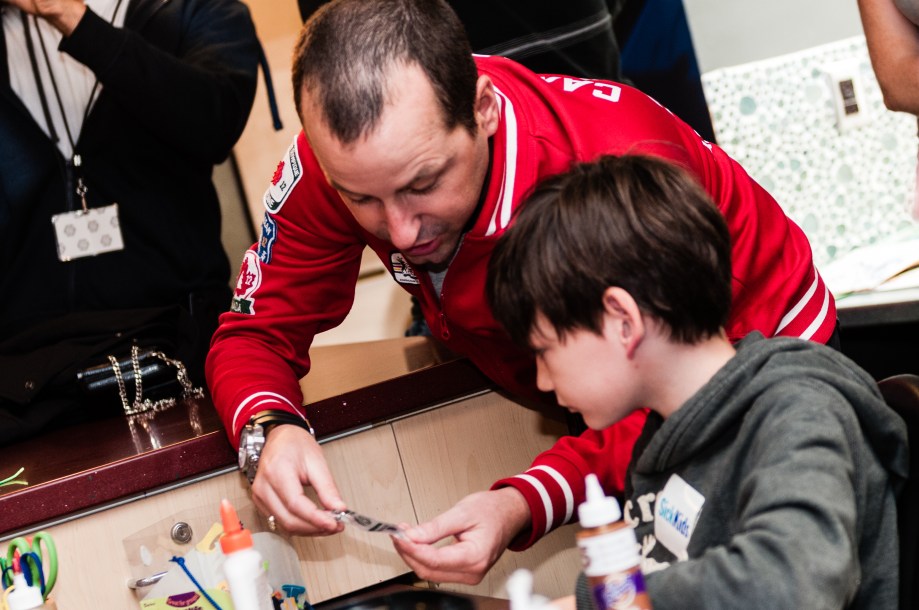 Imagine you are an eight-year-old kid with cancer. You are stuck in the hospital and don’t understanding what is happening to your body. You miss your friends, and long just to be outside. You miss being happy.

Worst of all, the adults around you can’t relate to how you feel … until the day Olympic coxswain Brian Price walks in your room.

You know about this two-time Olympic medallist and three-time world champion. You’ve seen pictures and videos of him competing at the Olympic Games.

What you don’t know, however, is that he was once just like you: A kid with cancer, stuck in a hospital and just wants to go outside to play with his friends.

“I cannot tell you how awesome that was,” said Christine Harkin after Price met with her son Liam who is fighting Leukemia. “He hasn’t stopped talking about it.”

Price told the Canadian Olympic Committee that it’s moments like these he keeps close to his heart. It’s kids like Liam he knows will fight a little bit harder and smile a little bit more because they had a chance to share both his triumph and his struggle.

“It is a real chance for the kids to meet someone who has had a similar experience as them go on and enjoy life and be productive,” Price said about the time he spends visiting young hospital patients. “I know it can be difficult to sit in a hospital room and envision yourself doing normal things … this is an opportunity for parents to meet me too and see what I’ve been able to do and give them hope that it’s not always going to be about hospital visits.”

When he makes these important visits, Price makes sure every young patient knows they’re not the only ones going through this. They’re not the first ones and they won’t be the last ones either.

He can sympathize with their stories by describing his familiarity with different medications and how he felt coming out of chemotherapy — or the need to have a private tutor because he simply missed too many days of school.

“The best thing I can do is open up a little about my experiences,” said the Belleville, ON native. “I remember being the kid in the oncology ward being too tired to do anything … Just to be able to spend time with them and getting to know them can motivate and inspire.”

This idea is not lost on the coxswain, whose job is to push the limits of the eight men in his heavyweight boat.

“It’s like when I’m with the rowers and they’re in the trenches pouring their guts out and they’re totally fatigued beyond what they expected,” said Price. “But it’s about being there and supporting them and getting to know the person that gains their trust and respect.”

It’s clear that Price’s childhood experiences have helped him become an individual who knows that no matter how things get, they can be overcome.

What are his fears now?

“I have a fear of letting down the guys in my boat,” said the small-framed Price about leading his eight, heavyweight men. “I’m always mindful that it’s not about me, it’s about the team and the guys around me. I want to make sure I help everyone get better each day. That’s my goal.”

It’s because of Price’s commitment to this goal, that kids like Liam can learn to fight with Olympic courage — the same kind of courage that wins Olympic medals.

He will continue to share his message when he is joined by a host of other BC area Olympians on a visit to the Children’s Hospital in Vancouver Friday, November 17th.