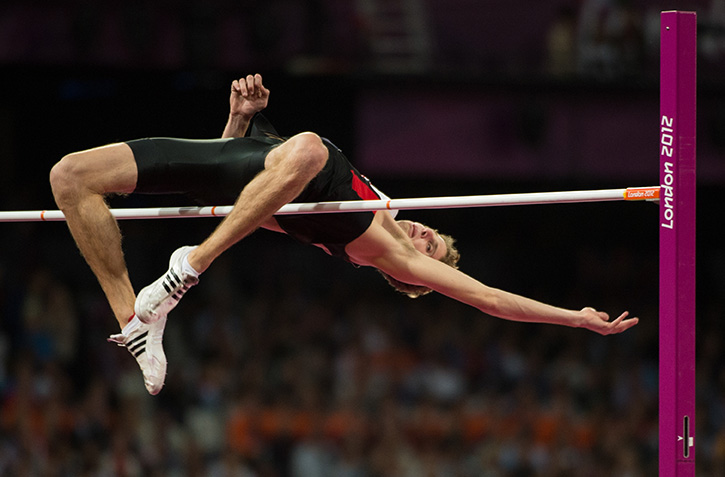 Athlete of the week: Derek Drouin Thus far, 2013 has been a memorable year for Derek Drouin. In March the Olympic bronze medallist won the NCAA Indoor high jump title with a leap of 2.35m, breaking a national record that had existed since 1999. On June 1 Drouin broke the Canadian outdoor record, a mark untouched in 11 years, with a jump of 2.36m to capture bronze at the Prefontaine Classic, the fourth stop of the IAAF Diamond League. Less than a week later, in his final meet for the Indiana Hoosiers, he won the NCAA Outdoor high jump title by clearing 2.34m. In doing so, he became the first ever five-time NCAA high jump champion.

This past week he was named the National Field Athle the Year by the U.S. Track and Field and Cross Country Coaches Association, making him just the second athlete to sweep the indoor and outdoor awards in one year.

Heading into this weekend, Drouin’s 2.36m was the second-best mark in the world for 2013. Coming up for the pride of Corunna, Ontario are the Canadian Track and Field Championships in Moncton, New Brunswick June 20-23 where he can secure his spot on the team for the IAAF World Championships to be held in Moscow August 10-18. Follow: @ddrouin10, @athleticscanada.