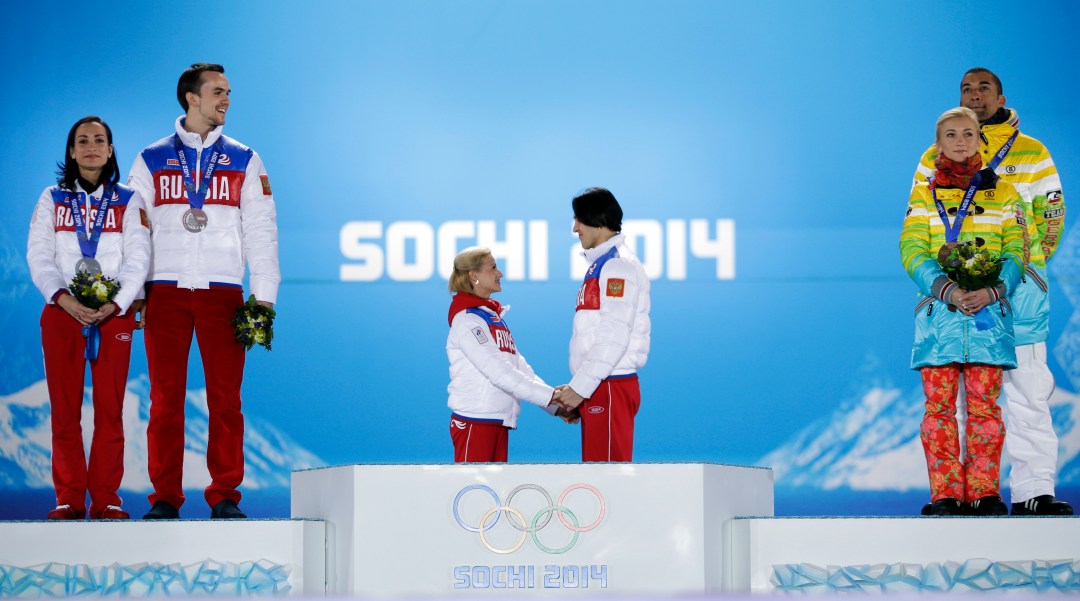 The highs & lows of the Olympic pairs figure skating event Simon Shnapir’s costume was not so much James Bond as it was, “Hand in your badge, Schnapir. You’re off the force!” in his pairs free program with Marissa Castelli but the costume misstep was quickly forgotten when they attempted a quad salchow throw, something that has never before been landed in Olympic competition. Sadly, it still hasn’t been landed as Marissa had to put her free foot down but holy dinah, can you blame her? Did you see how high Simon threw her? It appeared that Simon might have thought that he was competing in the Summer Olympics because it looked like he was attempting to set a world record in the hammerthrow. That was a gutsy move from Marissa & Simon and all the ups to her for not only agreeing to do the throw in the first place but for also giving it a mighty fine attempt. Meagan Duhamel & Eric Radford’s free program was a bit tentative but they still threw down some impeccable triple lutzes, jumps with a level of difficulty no one else in the world comes close to in their side-by-sides, what with their toes and their salchows. Meagan & Eric may not have had the clean free skate that they had planned and Canada is supposed to be all, “Podium or nothing!” nowadays but their excellent showing still gave them, and us, a lot to be proud of. Kirsten Moore-Towers & Dylan Moscovitch’s free program might not have had the same level of difficulty as Meagan & Eric’s but, man, was it solid! Dylan doubled a planned triple salchow but other than that small glitch, it was a wonderfully clean program. Kirsten & Dylan punctuated their skate with some tremendous lifts and in the off chance that those lifts look simple to you, just remember how much trouble you have walking on an icy sidewalk and then add holding a human being over your head to the equation. Kirsten & Dylan’s clean skate put them squarely in first place, heading into the final flight. Tatiana Volosozhar & Maxim Trankov tore up the ice in the short program, setting a world record in their home country and there can’t be any better feeling than that. Except perhaps the feeling of weathering the gold medal expectations of 143.5 million Russians. Tatiana & Maxim’s long program was a thing of beauty but it was not flawless. It was more like they were clinging to a dinghy in the middle of a hurricane. Maxim’s howl following the end of their skate didn’t sound like a man satisfied with his performance as much as it sounded like a man who survived under the immense weight of Mother Russia’s hopes. The exquisite quality of their skating, no more evident than in the speed, flow, and phenomenal height of their triple twist, propelled them past everyone’s favourite oddballs, Ksenia Stolbova & Fedor Klimov, into first place with only two pairs left to skate.

Aliona Savchenko & Robin Szolkowy started their free skate as the only pairs team in the last 2 years to win over Tatiana & Maxim. On the second element of their program, Robin fell on his triple toe, effectively ending any realistic hope of them winning the gold medal. Despite knowing that any further mistake could jeopardize a place on the podium, Aliona & Robin still attempted a hail mary pass at the end of their program, a huge throw triple axel. Aliona fell. It’s possible that Aliona & Robin could have held on to a silver medal if they had played it safe and attempted an easier throw but playing it safe isn’t what the Olympics are for. There is nothing more beautiful than watching someone stretch just a little bit farther than they are able with the hope that maybe today, they can reach it.  Aliona & Robin may not be Olympic champions but they are Olympians through and through. Did you enjoy the Olympic pairs figure skating event? How amazing were Kirsten & Dylan’s and Meagan & Eric’s 5th and 7th placements, respectively? Let’s not forget Canada’s third pairs team, Paige Lawrence & Rudi Swiegers; how cute was the amazement on her face during their free program? Olympic figure skating continues Thursday with the men’s short program, an event that includes one Mr. Patrick Chan, trying to win Canada’s first ever gold medal in the men’s event. 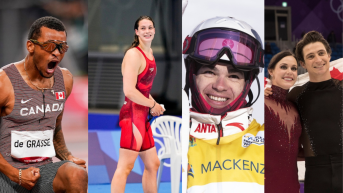 Marissa Kurtimah immigrated to Canada in 2002 to escape the civil war in Sierra Leone. While attending the University of...

Marissa Ponich began competing internationally in 2012-13. Representing Canada wasn’t a goal she had at the beginning of her career,...